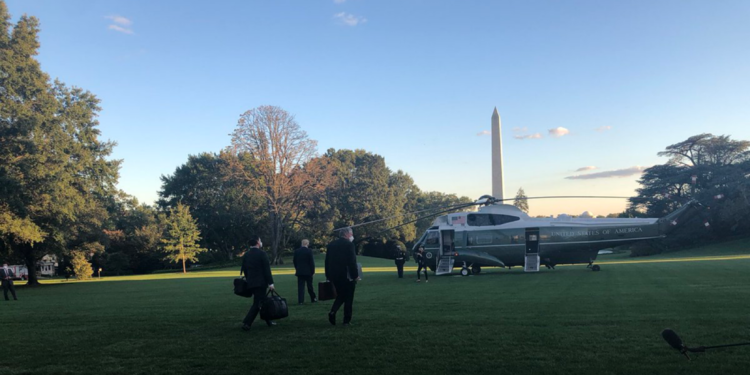 Trump Hospitalized, Being Treated With Remdesivir

White House physician Sean Conley said in a memo released by the press office that Trump did not require supplemental oxygen as of late Friday, but that doctors opted to initiate Remdesivir therapy.

“This afternoon, in consultation with specialists from Walter Reed and Johns Hopkins University, I recommended movement of the President up to Walter Reed National Military Medical Center for further monitoring,” Conley wrote. “This evening I am happy to report that the President is doing very well. He is not requiring any supplemental oxygen, but in consultation with specialists we have elected to initiate Remdesivir therapy. He has completed his first dose and is resting comfortably.”

The use of Remdesivir means Trump is now on multiple therapeutics to treat his infection. Conley said earlier in the day that the president was given an experimental antibody injection developed by Regeneron. He is also taking zinc, vitamin D, famotidine, melatonin and aspirin.

Here’s Regeneron’s 9/29 press release on the results of the first 275 patients in their clinical trial. As far as I understand it (not far), their antibody cocktail is like a synthetic version of the old practice of infusing new patients with blood plasma from recovered patients (which, unfortunately, hasn’t tested well so far).

REGN-COV2 is a combination of two monoclonal antibodies (REGN10933 and REGN10987) and was designed specifically to block infectivity of SARS-CoV-2, the virus that causes COVID-19.

To develop REGN-COV2, Regeneron scientists evaluated thousands of fully-human antibodies produced by the company’s VelocImmune® mice, which have been genetically modified to have a human immune system, as well as antibodies identified from humans who have recovered from COVID-19. The two potent, virus-neutralizing antibodies that form REGN-COV2 bind non-competitively to the critical receptor binding domain of the virus’s spike protein, which diminishes the ability of mutant viruses to escape treatment and protects against spike variants that have arisen in the human population, as detailed in Science. Preclinical studies have shown that REGN-COV2 reduced the amount of virus and associated damage in the lungs of non-human primates.

I got treated with a cancer-fighting monoclonal antibody in a clinical trial back in 1997.

Post
The McMichaels’ Trial Is Worse Than Horrible, It Is Precedent Setting, Affecting Anyone Who Defends Himself From An Attempted Gun-Grab
MORE...
POPULAR TAGS