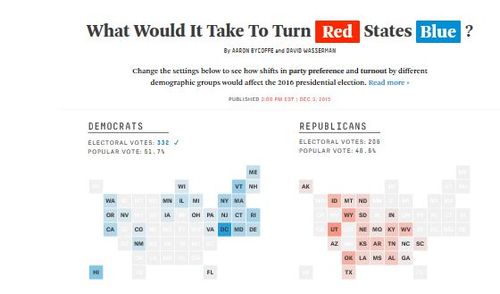 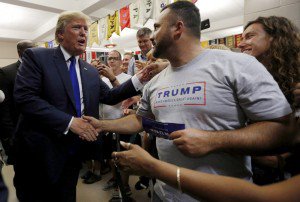 For months, VDARE.com Editor Peter Brimelow has badgered me to write on how Donald Trump could win the general election if nominated. Until recently, I was very skeptical. As VDARE.com has pointed out for years, no amount of GOP pandering will ever win a significant share of blacks and Hispanics. And I thought the white vote was too divided to outbalance the increasing minority vote. But a recent article on Nate Silver’s FiveThirtyEight.com [What Would It Take To Turn Red States Blue? By Aaron Bycofffe and David Wasserman, December 3, 2015] has (no doubt unintentionally) changed my mind.

Of course, the Main Stream Media over-hypes the non-white vote. But mass immigration has forced Republicans to get an increasingly high level of white voters (known until 1965 as “Americans”) to win. But, unlike minorities, whites have very heterogeneous opinions, and I thought that simply running against Amnesty on its own would not win a landslide amongst them. There’s a large chunk of liberal whites who either support Amnesty or do not oppose it enough to vote for a GOP candidate.

Furthermore, white swing voters do not break down on simple Liberal-Conservative-Moderate lines. Last year, NBC-Esquire came up with a good synopsis of the different types of swing voters with useful, if trite, buzz names:

[New American center: Why our nation isn't as divided as we think, by Tony Dokoupil, CNBC, October 13, 2013]

On most economic and social issues that typically dominate GOP primaries, these groups are not particularly conservative. According to Tony Dokoupil, “the new American center has a socially progressive streak, supporting gay marriage (64 percent), the right to an abortion for any reason within the first trimester (63 percent), and legalized marijuana (52 percent).” They also support ”paid sick leave (62 percent); paid maternity leave (70 percent); tax-subsidized childcare to help women return to work (57 percent); and a federal minimum wage hike to no less than $10 per hour (67 percent).”

However, on what VDARE.com calls the “National Question” issues, the “new American center” supports

…the end of Affirmative Action in hiring and education (57 percent). Most people in the center believe respect for minority rights has gone overboard, in general, harming the majority in the process (63 percent). And just one in four support immigration reforms that would provide a path to citizenship for those who came here illegally.

These polls were taken during the height of the push for Amnesty, before Black Lives Matter and the recent immigrant terrorist attacks. So I suspect support would be even higher now.

Donald Trump—as his Conservatism Inc. critics relentlessly remind us—does not support the usual plutocratic/social conservative agenda. Which is why they alternate between calling him an extreme right winger and not a real conservative.

So why did I doubt Trump’s ability to appeal to these voters? The conventional Establishment wisdom is that “Mr. Trump’s tone is more important to his supporters than are policy stances.” [Donald Trump Forges New Blue-Collar Coalition Among Republicans, Wall Street Journal, December 4, 2015] Acknowledging that the masses may actually support his policies on crime, terrorism, and mass immigration is apparently too much to contemplate.

Yet it is true that there are many Trump opponents who simply do not like his style, even if they support his positions.

Anecdotally, I have a family member who I frequently discuss politics and would be a clear member of the “MBA Middle.” He is a retired upper middle class professional. He has moderately conservative views on economic policy. He pro-choice and generally does not like the Christian Right, but feels the Gay Rights movement has gone too far and finds transgender rights self-evidently absurd. He supports gun control, but has always been against mass immigration and Affirmative Action. He was a Democrat most of his life largely based on instinct of not wanting to appear extreme and crazy. He had slowly crept towards the right over the last 15 years, but the War in Iraq made him strongly oppose George W. Bush. He saw through Obama’s famous “race” speech and was inclined to vote Republican, but McCain’s hawkish foreign policy combined with his distaste for Sarah Palin made him stay home 2008. In 2010 he voted straight ticket Republican and in 2012 he enthusiastically backed Mitt Romney and voted Republican in 2014.

My relative hates Hillary Clinton, but doesn’t particularly like any of the GOP candidates. Right now he says he favors Kasich. I have asked him why, and he can’t give any good policy reasons, it’s just that Kasich seems “presidential.”

My relative hates Trump because he thinks he is too bombastic and an attention hog. If Trump gets the nomination, he says he will vote for Hillary Clinton—and I believe him.

After Thanksgiving, many of my Trump-supporting friends reported that their upper-income Boomer relatives had a similar visceral dislike for Trump, even if they tended to agree with him on policy.

These types of voters dominate the Northern Virginia, Denver, and Miami suburbs in what are key swing states. I thought (and still think) Trump would fare very poorly amongst this demographic. Therefore, I concluded, he would have great difficulty winning the general election.

Yet upper-income Boomers are not the only swing voters. Millennials grew up with Bill Clinton’s sex scandals and then George W. Bush’s bumbling and have no illusions about the Presidency being a hallowed and respected office.

And a recent poll of Millennials shows Trump leading among Republicans. The poll does not ask who these Millennials will support in the Presidential election or break down results by race. But it shows that Millennials are evenly divided over whether Trump is qualified to be president. I suspect this means a large majority of white Millennials believe he is. [Harvard IOP Fall 2015 Poll, December 10, 2015]

Most importantly for Trump’s prospects: the white working class. Not even his critics deny he has struck a chord with this demographic.

Previously, I did not think that even a landslide amongst working class whites could put Trump into the White House if he did not perform well amongst the “MBA Middle” types. But the FiveThirtyEight.com feature changed my mind. Bycoffe and Wasserman came up with an app they called the “Swing-O-Matic” which allows you to adjust the input of two factors—turn-out and share of the vote—for five demographic groups:

It will output how swinging these results will affect the results in each state.

You can mess around with the app and come up with many scenarios that will give Trump the election, but I will create one that I think is very possible:

This scenario represents: Under this scenario, Trump would win the popular vote 49.6 % to 48.7% and have a healthy Electoral College victory of 332 to 206—identical to Obama’s 2012 victory. He’d lose many Hispanic heavy-western states such as New Mexico, Nevada, and Colorado, but he’d bring in many states that the GOP has not won since the 1980s, including Wisconsin, Michigan, Minnesota, and Pennsylvania; as well as Iowa, and Ohio, which Obama won in 2008 and 2012.

This scenario gives Trump small leads in heavily MBA Middle states that Obama won, like Florida, New Hampshire and Virginia. But he could even lose those states and still win the Electoral College 285-248.

Incidentally, right after Romney’s loss in 2012, I charted this exact path to victory on VDARE.com:

Republicans could conceivably lose the heavily Hispanic swing states of Florida, Nevada, and Colorado and still win by sweeping the South (save Florida) and winning most of the white Rust bowl and Midwestern states.

I could play around with this model a lot more and come up with various scenarios where Trump would or wouldn’t win.

But that an increase in white working class share and turnout gives him such a margin of error with other groups makes me certain that a Trump presidency is a real possibility.