Even as President Obama’s unilateral Executive Amnesty has met with legal obstacles, Open Borders advocates are still moving forward with their plans to drown the American people in a flood of unlimited immigration. And the worst part, to me as an increasingly distressed Democrat: they aren’t even bothering to hide it—and the party’s likely nominee, Hillary Clinton, is scrambling to agree. 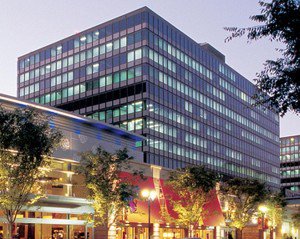 hough the Department of Homeland Security has put its expansive plans on temporary hold, it has already rented out a huge and wildly expensive office (right, 2200 Crystal Drive) in the Crystal City neighborhood of Arlington, VA to house an estimated 3,100 new employees to implement the President’s program. Apparently, this was implemented the very moment President Obama decided on his unconstitutional actions. [Obama administration stops work on immigration program, by Jerry Markon, Washington Post, June 7, 2015].

For me, this empty (for now) building symbolizes the arrogance of the President and the scope of what he is trying to foist on the American public. It’s the symbol of a government based on the permanent majority of one party, because the President assumes most of the “new Americans” will vote Democratic in perpetuity.

And as WaPo’s Markon reports, part of that permanent one-party state apparatus are a host of well-funded groups who speak in the name of the poor and downtrodden but are funded by plutocrats with no loyalty to America. And something as petty as the law won’t hold them back:

“Yet inside and outside the Beltway, community groups are mobilizing, educating immigrants and training volunteers to help them apply for relief, even though it remains unclear whether the program will ever begin. Most recently, a foundation headed by billionaire George Soros, undaunted by the court rulings, pledged at least $8 million to that effort.

“We’re full speed ahead,” said Josh Hoyt, executive director of the Chicago-based National Partnership for New Americans, a coalition of pro-immigrant groups that have held more than 700 information sessions on the new programs and trained more than 2,000 volunteers to aid immigrants in applying for them.”

If you are not utterly horrified and angered by all of this, you really don’t deserve to be a citizen.

President Obama’s unilateral action would have protected up to 5 million illegal immigrants from deportation. And the court ruling that has temporarily stopped all this reminds me of nothing so much as the Dutch boy with his finger in the dyke trying to prevent his town from being flooded. And all of us old enough to have seen that leak which began in 1965 turn into a flood feel an overwhelming sense of frustration our own President is determined to unleash another deluge.

The population of our country has been doubled since 1965 without even a vote by our citizenry. And now this Washington Post article tells us the President is “frustrated” over these rulings. I’m not sympathetic.

Most Republican presidential candidates have pledged to overturn Obama’s immigration actions, while leading Democratic candidate Hillary Clinton has strongly endorsed them [Clinton speaks forcefully for path to citizenship for illegal immigrants, by Anne Gearan, The Washington Post, May 5, 2015].

The Obama Administration is being extremely cautious after the court decisions. Yet his restive foot soldiers are champing at the bit, ready to unleash an army of illegals eager to trample American laws and the American way of life. WaPo’s Markon continues:

Across the nation, immigration advocacy organizations and other community groups are training people who will act as “navigators” — helping immigrants determine whether they are eligible for DAPA, locate key documents such as school transcripts and fill out the application. Activists describe the training as similar to that for another key Obama initiative, the Affordable Care Act, which also used navigators to help people enroll for health insurance.

And plutocrats are the ones pulling the strings behind this “grassroots” effort:

“The reality is you can’t turn on a switch in people’s lives and all of the sudden 5 million people pour into the gates of DHS and move into the application process,’’ said Ken Zimmerman,[Email him] director of U.S. programs for the Open Society Foundations, of which Soros is founder and chairman.

Zimmerman said the $8 million the organization is making available will go to a variety of community groups and will fund things such as new computer software to help them process applications. He said the foundations may donate more.

In the Washington area, CASA — a Maryland-based immigrant advocacy group — is continuing the DAPA informational sessions it has been holding in Maryland, Virginia, Pennsylvania and Delaware since Obama’s announcement in November.

At first, “hundreds and hundreds upon hundreds” of people showed up, said George Escobar [Email him] CASA’s senior director of human services. Since then, he said, “obviously interest has waned a little” amid frustration over the legal setbacks.

“Our job is to keep people motivated,” added Escobar, who believes it is “highly likely” that DAPA will survive the court challenge. “We will continue to prepare for it,” he said.” [Emphasis and links added]

So where are the Republicans?  Hunkered down, heads between their ankles, as usual. They’re afraid of losing donations from their corporate masters or incurring the enmity of raucous immigrants who won’t vote for them anyway.

It is an old story.  And as long as Americans are perceived as too fat, lazy, rich, or fearful to act in their own best interests, the hordes will continue to come here and take our country from underneath us. It’s a story as old as the fall of Rome.

The degeneracy of our own Hollow Empire can be seen in an outrageously expensive building in the (appropriately named) Crystal City. This Democrat is now firmly decided he will not vote for Hillary, as she has cast her lot against us citizens and the futures of my children and grandchildren.