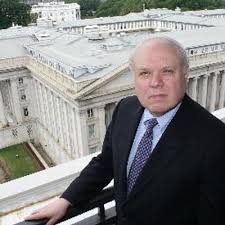 It's remarkable enough that Friday's SurveyUSA poll showed Donald Trump beating Hillary Clinton 45%-40%. It's truly astonishing that Trump gets 25% THAT'S T-W-E-N-T-Y F-I-V-E PER CENT of the Black vote—vs. some 7% for Romney [Blacks outvoted whites in 2012, the first time on record, by Dan Merica, May 9, 2013].

Why? Coincidentally, Bruce Bartlett, my old friend from the pre-Reagan GOP Congressional staff [pictured],  has an excellent data-packed column in the Washington Post that points to a reason: Donald Trump doesn’t need Latino voters to win (September 4 2015):

...if Trump could replace Latino votes with those of another large minority group that traditionally votes Democratic, he might have a fighting chance at victory. And even without changing his message, black voters could be that group.

African Americans have long been receptive to the anti-immigrant concepts behind Trump’s campaign. Simply put, the jobs, housing and other opportunities that immigrants take come largely at the expense of blacks who were born in the United States... A 2010 study by the economists George Borjas, Jeffrey Grogger and Gordon Hanson found that a 10 percent immigration-induced increase in the labor supply reduced African Americans’ wages by 2.5 percent and the employment rate among blacks by 5.9 percentage points.

...it is not too soon for Trump to think about a general-election strategy. Using his immigration position to make a play for black votes is exactly the sort of unexpected play that has propelled him to the top of the GOP pack. He may just be audacious enough to pull it off.

Bruce has had a ideology-change operation since the 1980s and there are various silly signs of this in his column, but it doesn't do him any good: the WaPo comment thread is outraged by what is obviously a new and unwelcome idea. To VDARE.com readers, of course, it's old news.