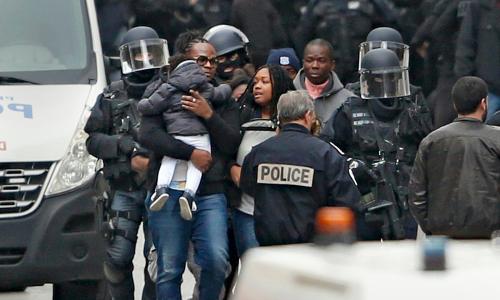 Paris Attacks Update: Reading Between the Lies at CNN

Ward was reporting just hours after French police had raided an apartment building behind where Ward was reporting, full of Arab Moslems who were part of the cell that had carried out the Friday the 13th attacks. One Moslem in the apartment had detonated a bomb vest, killing herself, and wounding five policemen. Police killed another Moslem with gunfire and a grenade, and took seven Moslems into custody.

It was five days after the Moslem attacks, one of them at a stadium only 100-200 yards away, according to another CNN operative, and other Moslem attacks in Paris not far away. And it was only ten months since the murderous, January 7 Moslem attacks on the Paris offices of Charlie Hebdo and a Parisian Jewish supermarket.

Paris, France, is most definitely a war zone.

Another, man CNN operative had said something I found odd 15-20 minutes earlier. He said that the neighborhood, St. Denis, where the terrorists had their safe house, was a “working-class neighborhood,” and so its residents were used to “a high crime rate,” but they weren’t used to hearing explosions, such as they heard in the wee hours today, and five days ago.

In France, “diversity” is spelled “I-s-l-a-m.” (There may also be some non-Moslem black Africans.

If my exercise in reading between the lies is accurate, it means that the Moslem banlieue (suburbs) have started moving into the “City of Light.” No wonder, a cell of Moslem terrorists could take up residence in a Parisian apartment building, without drawing attention to themselves.