Trashing Trump: Conservatism, Inc. Has Sounded Forth The Trumpet That Will Always Call Retreat

The Main Stream Media finally found a black-on-white attack it can be outraged about. At a recent Donald Trump rally in Arizona, Leftist protesters disrupted the candidate’s speech, using, among other props, a Ku Klux Klan hood. One of the self-styled anti-racist (and needless to say, white) protesters then found himself on the receiving end of a series of kicks and punches by an African-American Trump supporter.

The attack has been prominently covered by the MSM. But the racial identity and presumable motivation of the attacker has been carefully concealed [Video captures Trump supporter punching protester, ABC 13, March 20, 2016].

What is remarkable here is not that one Trump supporter finally had enough. It’s that there haven’t been more acts of violence after Leftist protesters invade Trump’s rallies (which contain—or contained—many women and children) screaming, cursing, and seeking to provoke confrontations.

One can only imagine the national meltdown which would ensue if Republicans used similar tactics against Hillary Clinton or Bernie Sanders.

Before the event in Arizona, a shrieking mob had blocked the road, seeking to prevent supporters from attending Trump’s rally [Protesters try to block access to Trump rally in Arizona, ahead of big primary in border state, FoxNews, March 19, 2016]. The rioters claimed they were against “hate.” Naturally, their fight against “hate” also included threats of murder, as they chanted: “What do we want? Dead Trump!” [Trump Protesters Block Highway to Phoenix Rally, WND, March 19, 2016] 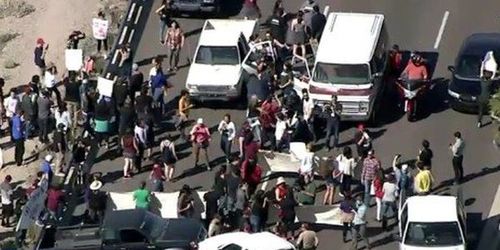 In New York City, thousands of people promised on Facebook to protest Trump at Trump Tower on Saturday. Only a few hundred turned up, but they received mostly fawning press coverage. [Hundreds protest Donald Trump in New York City, CBS, March 19, 2016] However, a CNN reporter on the scene admitted that a protest is supposed to stay peaceful and “that’s not what’s happening here.”

Earlier this month, a Trump supporter in Dalton, Georgia (22 percent Hispanic) had a gun pulled on him by a group of Spanish-speaking males for daring to put a campaign sign in his yard [Update: 3 arrested for pulling gun on Trump supporter, WRCB, March 10, 2016]. Other than making the local news, this received little coverage. 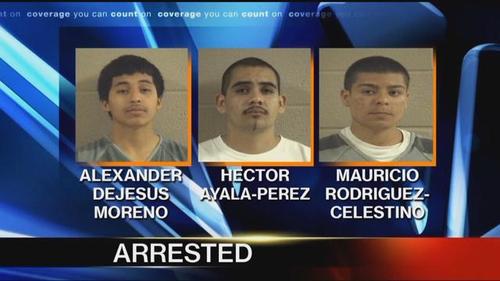 And all of this is occurring against the background of what can only be called a MSM campaign to incite assassination attempts against the candidate himself. Meanwhile, these same outlets concern-trolling Trump are giving adoring interviews to the man who actually tried to rush the stage and physically attack him. [CNN Exclusive: ‘Trump is a bully,’ says man who rushed stage, By Martin Savidge and Dana Ford, CNN, March 13, 2016]

Incredibly, many Conservatism, Inc. types seem to believe they will somehow be spared from Leftist retaliation if they denounce Trump loudly enough. After a dangerous mob waving Communist banners shut down a Trump rally in Chicago, Ted Cruz held Donald Trump responsible. John Kasich suggested Trump is “prey[ing] on the fears of people” and has created a “toxic” environment which leads to violence [Kasich Blames Trump for ‘Toxic’ Environment in Wake of Chicago Protests, by Reid Epstein, Wall Street Journal, March 12, 2016]

And Erick Erickson thinks there’s something unique about Trump which is creating violence.

Even at Erickson’s old website, the ferociously anti-Trump RedState, there are those who may despise the Republican frontrunner but recognize Leftist protesters are simply using the same tactics they use against everyone else.

As any conservative campus activist who has tried to host a speech can tell you, it doesn’t take much to get Leftist mobs howling for blood. And as anyone who has actually seen a Leftist protest in action can confirm, the MSM will always do its best to conceal the facts and blame the victim for any violence.

But Erickson is right about one thing. As our own Ellison Lodge observed, unlike every other candidate, Trump is actually a serious threat to the Left.

Supposed “true conservative” Ted Cruz has moved in the right direction on immigration, but there’s no indication he would even be talking about the issue if Trump had not opened up the discussion. And if Cruz somehow does secure the nomination, the kind of sustained MSM hate campaign Trump has thus far been able to survive would utterly destroy Cruz once the Texas Senator became its target.

More importantly, Trump is inspiring Americans actually to confront the people who are openly declaring their hatred of the nation. He is not only shifting the Overton Window, but he is telling his supporters not to be content with constantly losing to the Left or being marginalized by a hostile and lying MSM.

As Trump himself put it, he doesn’t condone violence against protesters, but the far Left agitators are hardly “innocent lambs.” They are performing illegal actions for which conservatives would be instantly arrested and excoriated by every notable figure in the country. But somehow, this is construed as Trump “refusing to condemn” violence. [Trump refuses to condemn supporter who punched and kicked a protester, by Daniel Politi, Slate, March 20, 2016]

Needless to say, the Beltway Right is joining with the MSM campaign of defamation and is actively working to elect Hillary Clinton in November. In response to a Republican frontrunner who has done more to shift the political conversation to the right in six months than the GOP has in sixty years, the supposed leaders of the “movement” want to create a third party [The fanciful dream of a #NeverTrump third party, by Scott Greer, Daily Caller, March 19, 2016].

And this is actually in their personal interests. Much like political consultants, the staffers and scribblers of the well-funded Beltway Right have nothing to gain from political victory or policy changes. Indeed, they personally prosper when Republicans are in opposition and there is a Democratic president to fundraise against.

Trump is revealing the real nature of the Left and the duplicity of the MSM. But he’s also unveiling Conservatism, Inc. for the scam that it is. It’s predictable that we see, not for the first time, the spectacle of supposed conservatives openly working with the far Left. It’s also not counter-intuitive that many supposed conservatives sound indistinguishable from your typical Women’s Studies major at Vassar College when it comes to Donald Trump. [Mitt Romney says he’s voting for Ted Cruz, by Nolan McCaskill, Politico, March 18, 2016]

Donald Trump is teaching ordinary Americans it’s OK to fight back. And that’s an existential threat for a faux “movement” which has offers us nothing but continued dispossession and defeat.