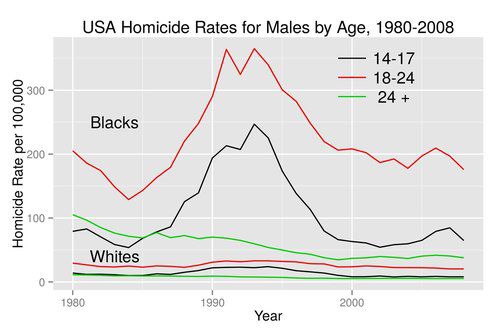 Absolutely the stupidest evaluation of George HW Bush’s legacy is that concern over crack cocaine and violence in the early 90s was just an exercise in white racism so I see that’s what we’re going with. pic.twitter.com/pUaKaxtybP

This graph of male homicide rates, in which the top 3 lines are for blacks and the bottom 3 for whites (which includes a lot of Hispanics), vividly shows the impact of the arrival of crack cocaine in the late 1980s. Note, however, that the upper green line — the homicide rate among black men in the age >24 category — generally declined during the Crack Wars.

So, it’s worth considering a second factor:

Gangsta rap, which emerged in 1988 with NWA’s “Straight Outta Compton” album, coincided with a sharp rise in the homicide rate among black males 14-24, but not in blacks over 24.

Perhaps black men over 24 just didn’t like the latest music?

And why would it be implausible that youths were susceptible to the messages in catchy rhythmic raps about how to be a man they need to murder their rivals?