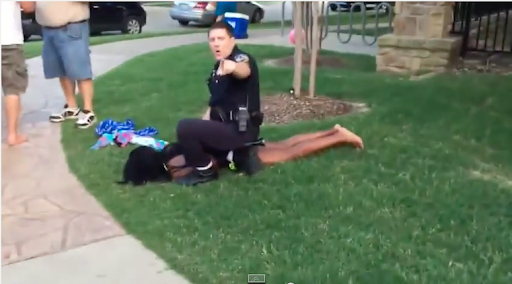 Immigration—Hey, Look! A Cop Yelling At A Black Girl In A Bikini!

I'm impressed by the coolness and steadiness of our media in suppressing any news about immigration. It's as if they've built a triple-layer fence with border guards around immigration topics. And guess what? Their fence is working!

How many thousands of news stories have there been on Ferguson, ISIS, Chris Christie's "Bridgegate" or men becoming women?

But the media will never tell you about Mexicans gang-raping a lesbian in Richmond, California, an Indian immigrant in San Francisco importing 12-year-old girls he bought from their parents for sex, or three children being beheaded by Mexicans in Baltimore.

Don't Americans have a right to know about the cultures flooding into our country?

This isn't a natural transformation. It is purely the result of government policy. But our media don't care to discuss the issue. In fact, they get mad whenever Americans find out what they're doing with immigration.

When Americans do think about immigration, they're against it. In polls earlier this year, more Americans had a favorable opinion of North Korea than wanted to increase immigration. That's why the media's approach to immigration is to never talk about it.

Three times in the last decade, Democrats and Republicans conspired to grant illegal aliens amnesty. All three times, the American people rose up in blind rage and shut it down. The only way they were tipped off to the proposed amnesties was through the hard work of about three bloggers, four talk-radio hosts and the Drudge Report.

What will happen if Matt Drudge ever goes on vacation? (Answer: You'll be living in Mexico.)

The media will make absolutely sure we know about every immigrant who wins a spelling bee. It's either important to know about who's immigrating to this country or it's not. If it's important, then we have a right to be told not only about the spelling bee champions, but also about the child rapes, genital mutilations, welfare use and Medicaid scams of our recent immigrants.

But the media's position is: If we don't talk about immigration, it doesn't exist.

Unfortunately, they're right. Most people think about only what the media want them to think about. Everyone has developed a position on Ferguson, ISIS and gay marriage. This week, everyone has a position on a policeman's confrontation with a black girl in a bikini at a pool party in Texas.

But no one is supposed to have an opinion about who gets to live, collect government benefits and vote in this country.

Whatever issue you think is more important than immigration, you're wrong. Without our post-1965 immigration policy, Obama would never have been elected president. That means no Obamacare, no withdrawal of every last troop from Iraq, no playing footsie with the Iranians, no Eric Holder, no Fast and Furious, no IRS harassment of Tea Party groups, no Benghazi massacre—and on and on and on.

Democrats haven't been able to persuade a majority of white people to vote for them in any presidential election since 1948, except the aberrational Democratic landslide in 1964. That's why they had to bring in ringers.

In addition to giving the Democrats tens of millions of new voters, our immigration policies have also brought in people who engage in charming traditional practices such as genital mutilations.

In 2006, an Ethiopian immigrant living in Lawrenceville, Georgia tried to cut off his 2-year-old daughter's clitoris with a pair of scissors. The New York Times ran one tiny AP item on his conviction—on Page 19—titled, "Man Convicted in Daughter's Mutilation." (Always look for "Man" in the headline to find the most appalling stories about immigrants.)

Thanks to decades of mass immigration from Africa and the Middle East, it is estimated that at least half a million girls living in the United States have been subjected to genital mutilation. (And that's just one of the many ways immigrants are making our country more vibrant!)

One white male, Bruce Jenner, merely contemplates voluntary genital mutilation and gets 10,000 times more media attention than the hundreds of thousands of "American" girls being involuntarily subjected to this practice.

When it comes to immigration, you'll only hear "Diversity is a strength," "Immigration is fantastic for the economy," "Polls show Americans overwhelmingly support a 'path to legalization'"—pay no attention to the outpouring of hostility every time an amnesty bill comes up—and "Oh, look! An immigrant valedictorian!"

The media don't need to run this scam forever. Democrats only need to keep it going until they have California-style majorities in every state, and then they'll say, "Screw you, America. We did this deliberately, and now there's nothing you can do about it."

That's exactly what the Labour government of Tony Blair did—as we found out in 2009. In public, Blair's government claimed that the mass immigration of the Third World to Britain was absolutely crucial to the economy!

Once they were out of office, Blair adviser Andrew Neather admitted that their real objective had been "to rub the Right's nose in diversity and render their arguments out of date," as the London Telegraph reported in 2009.

That's one way of winning elections. It's cheating, but it works!

Here in the U.S., Republicans aren't even fighting back. First of all, the GOP's big donors want the cheap labor. True, the country will be ruined, but business owners will be able to make a pile first—and then retire.

Evidently, elected Republicans ran the numbers and realized that the GOP won't be completely wiped out for a few more years, and by then, they'll all be retired.

(Noticeably, the younger, smarter Republicans are all on America's side on immigration: Sens. Tom Cotton and Ben Sasse, and Rep. Dave Brat.)

If necessary, political and media elites will call you a "racist" for opposing their mass immigration policies. But they'd really rather that you just not find out what they're doing to the country.

Her most recent book is Never Trust a Liberal Over Three-Especially a Republican.Her new book, ¡Adios America! The Left’s Plan To Turn Our Country Into A Third World Hell Hole,  was released on June 1, 2015.