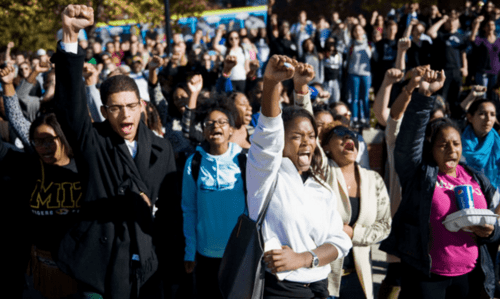 The Ululations of Radical College Crybabies 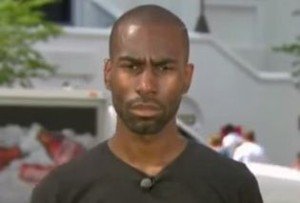 Deray McKesson (right) the professional agitator whose racial rabble-rousing began at tax-subsidized Teach for America, proudly unveiled his new enterprise on the Internet Thursday: A website chronicling "THE DEMANDS" of his radical brothers and sisters on college campuses across Northern America.

"We recently launched http://thedemands.org which compiles the college demands from across the country," he tweeted. "Check it out."

Whoops, kids, did I offend you with "Man, oh, man?" I plead guilty to "cisheteropatriarchy." Also: ageism! Prosecute me for serial microaggressions and throw me in the safe-space violators' slammer.

The current list of campuses represented on TheDemands.Org includes 37 institutions of higher learning. Or rather, higher moaning.

I'm calling the website the Social Justice Warrior Entitlement Mob Tracker. It's a useful database of progressive brats who are part of a clearly coordinated "Black Lives Matter" hijacking of American colleges and universities (with a few Canadian groupies tagging along). Whatever legitimate complaints these privileged—yes, you are privileged to be attending college in America in the 21st century—students may have had, they've utterly beclowned themselves with their over-the-top hysterics.

Leading the list is the University of Missouri, which claimed the scalps of the school's president and chancellor last week for insufficient attention to alleged bias incidents and drunken catcalls.

The Mizzou mob is also demanding a new race-based hiring quota increase for "black faculty and staff members campus-wide by 10 percent" and an increase in "funding and resources for the University of Missouri Counseling Center for the purpose of hiring additional mental health professionals, particularly those of color." [PDF]

Wait, they're not done. The "Amherst Uprising" tolerance mob also initially demanded that "student(s) who posted the 'All Lives Matter' posters, and the 'Free Speech' posters" that mourned "the true victim of the Missouri Protests: Free Speech," be subject to the school's "Disciplinary Process if a formal complaint is filed, and that they will be required to attend extensive training for racial and cultural competency."

That punitive demand was quietly scrubbed from the site, but the free speech-squelching mission of all of these bubble-wrapped crybabies who can't handle dissent of any kind is unmistakable. So is their brazen grab for power and money. They're not interested in gaining an education. They want political control.

As the protest leaders of the Atlanta University Center Consortium for black colleges made clear, their goal is complete transformation of their campuses to fulfill their "civic duty through direct action and grassroots organization."

Oh, and they "DEMAND" to get paid. ASAP! Boston College's demand-y demanders "demand the introduction of compulsory, in-person, and regular anti-oppression training" to be "led and organized by people of color with significant experience in anti-oppression activism or scholarship" who "should be compensated and acknowledged for their labor" beginning in "spring 2016." Not to be overlooked, social justice painters and papier mache protesters made sure to include Demand No. 7 from St. Louis University: "Mutually agreed upon commissioned artwork."

Unlike revolutionaries of past eras who cast off their shackles and demanded that their oppressors leave them alone, the 21st century insurgents demand that their indulgent overseers wipe their tears, hold their hands, and provide them round-the-clock therapy.

At Princeton, liberal professors and administrators patted themselves on the back for assuaging hurt feelings and eliminating the age-old tradition of calling college heads "masters." (Apparently, "master's degrees" are safe. For now.)

But it wasn't enough. Never enough.

The "Black Justice League" barged into the Ivy League school's president's office this week demanding full eradication of every reference to progressive racial segregationist Woodrow Wilson at Princeton; "cultural competency training for all staff and faculty"; a racially segregated safe space "dedicated specifically to Black students" who oppose racial segregation (except for themselves); and "classes on the history of marginalized peoples" because "[l]earning about marginalized groups, their cultures, and structures of privilege is just as important as any science or quantitative reasoning course."

Uh-huh. When academic courses get demanding, the weak-minded get demand-y. Listening to the ululations of their own entitled, endless bleating is much more appealing and healing, after all, than multivariate analysis, synthetic organic chemistry or mechanical engineering.