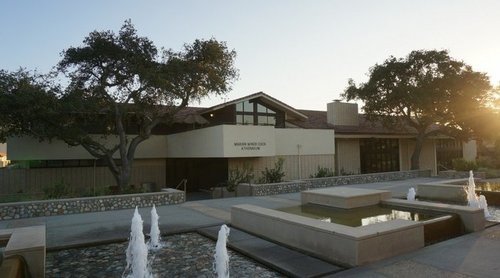 Via Jonathan Haidt, here’s a new story about an administrator at Claremont McKenna College in SoCal who was forced out today: 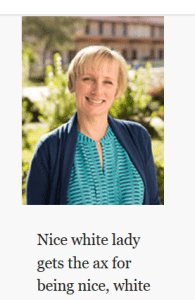 Earlier today, Mary Spellman resigned from her position as Assistant Vice President and Dean of Students at Claremont McKenna College. The resignation occurred in response to a protest that occurred yesterday, which was centered on the idea that Dean Spellman had not done enough to create a safe space on campus for students from marginalized backgrounds. The protests were catalyzed by an email Spellman sent to a student in response to an article that student had written for The Student Life earlier this week.

What happened was that student Lisette Espinosa sent Dean Spellman an article Espinosa had written. Here’s a representative sample:

Within the first weeks of school, I told an upperclassman Latino that I felt like I was admitted to fill a racial quota. Why would they want me here? Impostor syndrome is prevalent among first-generation students. These feelings caught me by surprise as I had never known what it felt like to be the “minority” in my predominantly immigrant, low-income Latinx hometown.

The week after classes started, I cried at the Chicanx/Latinx New Student Retreat, where I felt comfortable enough to voice my concerns about the school. Feelings of inadequacy have haunted me throughout my time at CMC, and my struggles with anxiety and depression first arose at the end of my second year.

Students of color often report feeling unwelcome at predominantly-white institutions, and CMC is far from an exception. Our campus climate and institutional culture are primarily grounded in western, white, cisheteronormative upper to upper-middle class values. Last school year, approximately 60 percent of undergraduate students did not qualify for financial aid based on ability to pay. And it was homophobia and transphobia on campus that encouraged me to complete a gender studies sequence. My second year on campus, the LGBTQ-related posters in the Stark elevator were consistently being ripped, written on, and literally clawed at.

The CMC administration knows the college needs a lot of work. As mentioned in their most recent Campus Climate Task Force (CCTF) report: “By some, CMC is perceived as an institution that fails to prioritize diversity and lacks sensitivity to diversity issues.” In a formal report released by CMC in 2013, the Climate Task Force, which was composed of students, faculty, and staff, agreed that the college needs to do considerably more to support its students of marginalized identities and backgrounds. In fact, the report outlines CMC’s long history of resisting this type of change.

Here’s the fatal email the Dean sent in reply:

Obviously, the administrator was agreeing with the aggrieved minority, but reading comprehension isn’t a strong suit among the campus mob.

If you are a white grownup employed on a college campus, it seems like the safest tactic in 2015 is to have zero individual dealings with members of the neo-privileged classes. Just give them all As, but otherwise insulate yourself from any interaction with them beyond the blandest, most pro-forma.

I first wrote about Claremont McKenna’s troubles providing the Diverse with a Comfortable Climate eleven years ago in “Hate Hoax.”

Post
Reagan On Columbus: "Columbus Challenged The Unknown When He Sailed Westward In 1492"