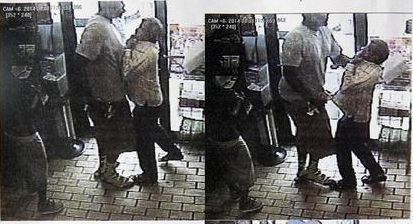 From the New York Times, we learn of the latest crisis requiring Maoist self-criticism among goodthinkers:

‘Burly,’ a Word With a Racially Charged History

Kyle Massey is an assistant news editor. He has worked at The Times since 1999.

As protests raged after the fatal shooting of Michael Brown in Ferguson, Mo., two articles in The Times on Aug. 16 referred to both Mr. Brown and the state police captain overseeing security in the case as “burly.” Both Mr. Brown and the captain, Ronald S. Johnson of the Missouri Highway Patrol, are black.

Readers wrote to say that “burly” has long been a racial stereotype; the word hasn’t appeared in this context in The Times since the readers’ notes.

So here is the tale of a troublesome word with a fraught history and how The Times came to reconsider its use. Burly means stout, heavy or muscular.

Alan Blinder, along with Tanzina Vega, Timothy Williams and Erik Eckholm, who wrote the two articles on Aug. 16 that referred to Captain Johnson and Mr. Brown as “burly,” apparently meant nothing more. The articles noted that both were black.

A reader named Joseph McBride pointed out that the word was often used as a racially loaded term in the Jim Crow South, and elsewhere

This piece received 115 comments, dozens of them from people who said they were there back then and it meant no such thing.

Of course, that’s the point: the word “burly” had zero racial implications — except perhaps in the disparate impact sense that burly implies a lot of muscle as well as weight, and there might be more burly blacks than whites. But, in general, the word tends to have, if anything, slightly white connotations in that it implies being not just strong but thickset. Here’s Google’s definition and synonyms:

(of a person) large and strong; heavily built.

Michael Jordan had a lot of muscle, but you wouldn’t call him burly.

In contrast, the New York Times’ own movie guide describes the star of The Guard and In Bruges as:

In general, I would think that the disparate impact goes slightly in the opposite direction: a higher percentage of white football players than black football players are described as burly.

But the NYT’s struggle session goes on:

and conveyed the idea that big black men are especially fearsome and threatening.

Whereas we could all see from watching the last Super Bowl that the big black men of the Seattle Seahawks defense were pushovers. Oh, wait …

“As far back as my childhood in the 1950s or early ’60s, I remember the Milwaukee Journal stylebook stating that the phrase ‘burly Negro’ was not to be used,” Mr. McBride wrote. “I asked my father, a Journal reporter, why that expression was singled out, and he explained that it was a racial stereotype.”

Several publications have had formal or informal strictures against using the phrase, but not all were codified in stylebooks. The Times’s stylebook is silent on the subject.

Greg Brock, a senior Times editor who oversees corrections and other reader concerns, forwarded Mr. McBride’s message to the news desk, which (among other things) speaks to questions of Times style, tone, fairness and quality control.

Mr. Brock offered his own take on the word. Calling on his upbringing in 1960s Mississippi, Mr. Brock, who is white, recalled the use of “the term ‘burly Negro’ (well, with a derivation of the N-word) and then ‘big burly black man.’ ”

But pre-Civil Rights Era white southerners wouldn’t have used the the attractively alliterative phrase “big burly black man” because they didn’t much use the word “black.” Nobody did, until the liberal-radical era of the late  1960s. The New York Times, for example, thought it highly proper to headline a story on March 17, 1969: “Turmoil in Los Angeles Schools Splits White and Negro Areas.”

He said he supposed that “burly” was just a descriptive word now, but he couldn’t put aside its coded baggage. “The phrase does have a very long history as a stereotypical label,” he wrote.

A quick Google search confirms a wide perception that the word is racially loaded, and several online sources linked the use of “burly” to the so-called “black beast stereotype.” The term was a staple in rhetoric surrounding lynchings.

Editors on the news desk noted that “burly” has many apt synonyms, and though no official proclamation was made, word went out to Times reporters and copy editors to find alternatives.

Yonette Joseph, a news desk editor who is black, said that the use of “burly” depends on context. “If the articles were describing the actor James Earl Jones or William (the Refrigerator) Perry, I’d see no problem with the word burly,” she wrote in an email. “But in matters of race, when the context is crime and other malfeasance, I’d flag that word.” The same would apply, she wrote, for “anything that describes a black man ‘shuffling’ into a room.”

On Sunday night, Marc Lacey, who runs the newsroom on weekends, read an early draft of a profile of Michael Brown when he circled a description: “tall and burly.”

The word didn’t make it into the paper.

To Baby Boomers like me, the word “burly” is permanently associated with burly singer and actor Burl Ives. He recorded the hobo song “The Big Rock Candy Mountain,” which included the lines:

On a summer day

In the month of May

Down a shady lane

More memorably to people my age was that Burl Ives voiced the narrator Sam the Snowman in the 1964 TV movie Christmas classic “Rudolph the Red Nosed Reindeer.”

And you can’t get much whiter than Sam the Snowman!

I commented that maybe the NYT should just have listed the child’s height (6’4?) and weight (292 pounds). For comparison’s sake, you could list the height and weight of that immigrant shopkeeper that Mr. Brown was videotaped shoving around while stealing from him.