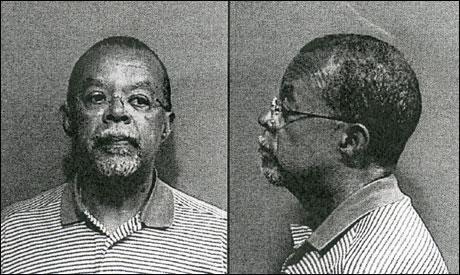 Larry Auster has done a lot of blogging about Henry Louis Gates's arrest for "disorderly conduct," starting with Henry Louis Gates, confirmer of racial stereotypes, and continuing with much much more. (The results of the suppression of the police report and The Cambridge Police Department, like liberal dhimmis, refuse to release the Gates arrest report)

The Boston Globe had the police report up on its website, and took it down, presumably because it had too many facts in it, so Auster has posted it himself.[Arrest report (PDF)]

The obvious point here is that if anyone was being a racist here, it's Gates. He sees a policeman come to his door, judges him by the color of his skin and his blue uniform, and starts yelling. The latest story, published in the New York Times, is that Gates is demanding a humiliating apology from James Crowley, the arresting officer, ("I would like a one-on-one with Officer Crowley," he said in an interview, "and I'd like him to apologize. But that will in no way determine if I sue him, the Police Department or the city") and it includes this startling fact:

"[Gates's] front door was stuck shut, and his taxi driver helped him pry it open. According to the subsequent police report, a woman called to report two black men trying to force entry."

Because there were two black men trying to force entry—Gates was breaking into his own house. This is not a crime, of course. I've done it myself.  So have most of my readers, unless they live in a town so small and monocultural that  they don't lock their doors. But it certainly justifies a police officer asking a question or two.

And if Gates weren't a racist himself, he wouldn't object to a white policeman inquiring when someone was reported breaking into his home.

Update: Thanks to Larry Auster, a man who's not easy to please, for the link and the kind words.