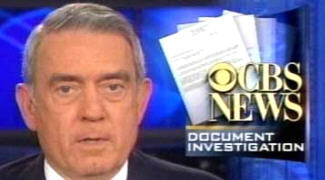 The Death Cry Of Snob Journalism

Dan Rather, Professional Journalist, and CBS News, Professional News Network, want us to keep believing that they are the ordained purveyors of truth. They are the mature and responsible mavens of media ethics. They are the information gatekeepers with unparalleled judgment, dedicated to the high principles of The Craft of Journalism, unwavering in their crusade for the public interest.

As the saying goes in the blogosphere: Bwah-hah-hah.

With a click of the mouse and easy-to-use Web log software, Internet-savvy citizens across America and around the world are relentlessly unmasking the frauds of snob journalism as never before. The wall between the self-anointed press protectorate and the unwashed masses has crumbled.

Rather and his geriatric empire are combating these powerfully persuasive blogs with anemic smears and sneers. And they are losing so very, very badly that they can't keep on top of their own spin.

Rather recklessly suggests that the bloggers who broke the story are disciplined "partisan political operatives," presumably affiliated with the Bush campaign and/or Republican National Convention. Former CBS news executive Jonathan Klein, on the other hand, suggests that the bloggers are loose cannons and amateur yahoos. The blogger, Klein told Fox News, is a "guy sitting in his living room in his pajamas writing" without acceptable journalistic credentials or a genuine commitment to "checks and balances."

It's no surprise, of course, that the conspiratorial, central-planning mindset of the mainstream media kingpins conjures up a top-down plot where there is none and where none could ever be orchestrated even if the Bush White House wanted one.

Bloggers take orders from no one. But with that irresistible platter of publishing freedom comes a tall glass of responsibility. For serious blogging pundits and news-gatherers and discussion board operators, cyber-cred is everything. Mainstream media anthropologists often attach the adjective "free-wheeling" to the blogger culture—ignoring the flip side of the brutally quick-fixing and 24/7 fact-checking nature of the medium.

What is amazing is that Rather would shamelessly traffic in such paranoid nonsense against conservative-leaning bloggers, without a shred of substantiation, in the middle of his own disastrous journalistic hurricane—and on the heels of CNN's recent disclosure that two of its most prominent talk show co-hosts, Paul Begala and James Carville, have been hired as official consultants to the Kerry presidential campaign but will remain in their current positions at the network.

About these proven Democratic "partisan political operatives," Rather has made no comment on CBS.

As for Klein, his pajama put-down will go down in media history as the death cry of snob journalism.

With amusement, I have watched my colleagues in the Old Media fight every democratizing and choice-enhancing trend during the dozen years I've spent in the information business. They scoffed at Rush Limbaugh as a flash in the pan (and have searched in vain for a commercial viable liberal counterpart for the last 15 years). They sneered at The Drudge Report (then bookmarked his site for hourly reading). They sniped at Fox News (then ripped off every one of Roger Ailes' innovations). They laughed at Regnery Publishing (then snatched up its editors and formed New York knock-offs). They mocked the insurgent New York Post (as their own circulation figures and ad sales tanked). And now, in final desperation, they trash the blogging revolution as an irresponsible pajama party for unprofessional hobbyists (even as they launch their own corporate-scrubbed versions to exhibit their "edginess.")

Faced with an unstoppable onslaught of competitive traffic, Dan Rather and the great pretenders in Trusted Journalism have only one choice for survival: Yield.