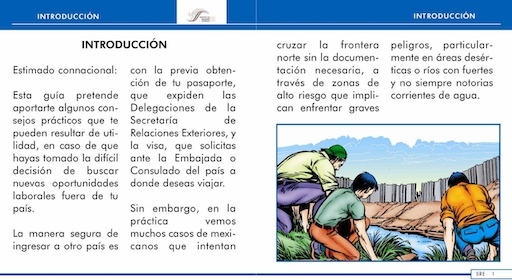 Having trouble designing an itinerary for your clandestine U.S. border crossing?

So many questions! What to pack? How much water to carry??

And once nestled inside your new American community (while it still is American—before it's Mexifornicated), will you find your oversized sombrero, gaucho mustache and over-packed burro are a red flag for immigration authorities?

Is your ignorance of American discourse, specifically with those dratted border patrol agents, thwarting your attempts to relocate your family to the United States?

As reported by the Arizona Republic's Chris Hawley [email him] in a recent remarkable article, [“Mexico publishes guide to assist border crossers,” Jan. 1, 2005]:

“The Mexican government is giving out a colorful new comic book with advice for migrants…The 32-page book, The Guide for the Mexican Migrant, was published in December by Mexico's Foreign Ministry. Using simple language, the book offers safety information for border crossers, a primer on their legal rights and advice on living unobtrusively in the United States.”

Note that the Guide [pdf file] was thoughtfully published in time for Christmas!—when “migrants” often go home for a long holiday.

Who said the Mexican government doesn't care about its people?

1.5 million of these books will be stashed inside a popular cowboy comic book and distributed throughout the five states that produce the most migrant traffic: Zacatecas, Michoacán, Puebla, Oaxaca and Jalisco. [Read the book here, in PDF, courtesy of FAIR.]

Many more will be sent to all 54 Mexican consulate offices for distribution within the United States.

Hawley's article contained many excerpts of the helpful hints in the new publication and here we can break them down by topic:

“Thick clothing increases your weight when wet, and this makes it difficult to swim or float."

"Try to walk during times when the heat is not as intense" (“Migrants” should follow power lines or train tracks if they get lost).

"Salt water helps you retain your body's liquids. Although you'll feel thirstier, if you drink water with salt the risk of dehydration is much lower."

“Don't throw stones or objects at the officer or patrol vehicles because this is considered a provocation…Raise your hands slowly so they see you are unarmed."

“Avoid attracting attention, at least while you are arranging your stay or documents to live in the United States…The best formula is to not alter your routine of going from work to home."

"It's better to be detained a few hours and repatriated to Mexico than to get lost in the desert.”

(Pop Quiz: Repatriated is to deported as

Clearly, the publishing of a how-to-break-the-law handbook raises serious questions about Mexico's commitment to the international laws that govern our mutual border.

By “serious questions,” I mean this book is a roughly-hewn declaration of war.

Most wars involve invasion. This is an invasion. Does Mexico have to write us a letter?

Oops! They just did!

Not surprisingly, the Mexican Foreign Ministry wouldn't respond to Hawley's requests for an interview on the book. But he did elicit some interesting quotes:

R-i-g-h-t!  If that were true, the book would have been called “Don't try to sneak across the border because you might die.”

But in fact there are four pages in the book devoted to how to live in the United States undetected.

“Avoid attracting attention, at least while you are arranging your stay or documents to live in the United States…The best formula is to not alter your routine of going from work to home."

This is not “doing everything we can to save lives.”

It's aiding and abetting a crime.

The “Guide” offers no tips on how to obtain a legal visa to enter the U.S.

And, of course, it makes no mention of perhaps improving the condition of Mexico—so its citizens might end their unprecedented “Mexodus.”

So what is America—i.e. the President and Congress—going to do about this latest attack orchestrated by Mexico?

Back in 1999, in his campaign autobiography A Charge to Keep, President Bush said:

“We must do a better job of stopping those who seek to come into our country illegally. I support strict border enforcement programs such as Operation Hold the Line, which concentrate border patrol officers and resources at known border-crossing points.”

And President Bush speaks often of the problem with coyotes or smugglers who illegally assist Mexicans across our border.

But how is his alleged good friend Vincente Fox any different from a coyote?

The answer: he is not.

Or at least, as far as our government is concerned, he shouldn't be.