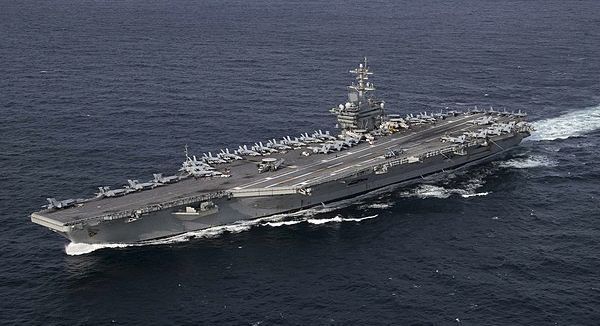 A Salute To The U.S.S. Abraham Lincoln

Greetings, America-haters. Do you think you could stop raving against our "war criminals" and "killing machines"—and you, Teddy Kennedy, could you stop panting over those Abu Ghraib photos—for a moment and join me in praise for our military's compassion and innovation?

At the drop of a hat, the U.S.S. Abraham Lincoln Carrier Strike Group sped from Hong Kong to help survivors of tsunami disaster in southern Asia.

How is the unmatched speed, range, and overall mobility of the American super carrier possible? Twin nuclear reactors.

Believe it or not, the U.S.S. Abraham Lincoln has been banned from docking at certain politically correct ports because of its reactors. For the moment, global environuts have stopped attacking the aircraft carrier over the nuke issue. But you can count on the eco-Luddites returning to their hysterical protests as soon as all the aid has been delivered.

Too much of the world, and too many here at home, take the amazing capabilities of ships like the Abraham Lincoln for granted. The carrier's 1,092-foot flight deck outperforms some of the best commercial airports, launching and recovering up to 90 aircraft on hundreds of flights every day, according to the Navy. Eight steam turbine generators produce enough electrical power to serve a small city. The ship carries approximately 3 million gallons of fuel, and can stock food and supplies for 90 days.

Oh, and those much-maligned nuclear reactors help turn seawater into more than 400,000 gallons of fresh water daily—clean, safe water desperately needed by survivors. Sailors aboard the U.S.S. Abraham Lincoln have reportedly even stopped taking showers to make every last drop of fresh water available to tsunami survivors for drinking.

Here are two fine, young American sailors—representative of thousands of Americans in uniform like them—lending their skills to help the suffering.

Where are the politicians who will wave Spc. Joshua Savoy and Spc. Davy Nugent's pictures before the TV cameras? Who will make them household names?

Aboard the carrier, every last crew member—from medical personnel to engineers to bakers—is pitching in to help with the relief effort. The crew of about 6,000 has deployed at least 10 of its 17 helicopters to deliver them to tsunami victims on the coast. Surgical teams from the carrier have set up triage sites on Sultan Iskandar Muda Air Force Base in Banda Aceh, and are working with teams from Carrier Air Wing Two and the International Organization for Migration.

You should also know that the members of the U.S.S. Abraham Lincoln Carrier Strike Group are no strangers to humanitarian missions. In October 1993, Abraham Lincoln took off from the Arabian Gulf (where it was supporting the United Nations-sanctioned enforcement of the no-fly zone over southern Iraq) for Somalia. The carrier flew patrols over Mogadishu and surrounding areas for four months, backing U.N. ground troops during Operation Continue Hope.

How's that for "stingy?"

I wish I had room to print the name of every sailor, pilot, rescue swimmer, technician, and engineer who serves in this strike group—and on every other American ship, plane, and helicopter on its way to help the tsunami victims.

You deserve to be seen and known and thanked and remembered. You make America proud.

At the U.N., saluting our troops is called jingoism. Where I'm from, it's called gratitude.