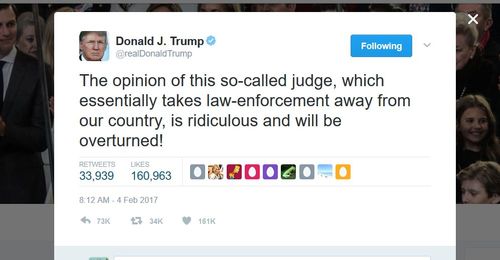 So it’s not just enforcing immigration laws that is “racist” today. Now, even the distinction between citizen and non-citizen has become “offensive.” The battle now is not just to preserve President Trump’s travel ban from the attacks of "so-called judges," to adapt his entirely accurate description, and the Official Opposition/Main Stream Media. It’s about preserving the existence of the nation itself.

MSM enforcers, few of whom have ever read a book other than Harry Potter, cheered President Trump’s defeat in the courts as a defeat for the president they despise and are openly trying to unseat.  But their simplistic coverage concealed the staggering radicalism of the Ninth Circuit Court’s decision.

The Ninth Circuit, although not “officially” deciding the merits of the immigration case, indicated that there is a constitutional right for anyone to immigrate, even during a time of war, even from countries we were so careful never to take immigrants from until recently. It concluded the president must show the courts sufficient evidence that each person will be a terrorist and anything short of that creates a due process right to be here.

The claim that non-Americans somehow possess constitutional rights, and have a right to immigrate to the United States, is laughable on its face. Yet quietly, without debate or even acknowledgement of what is going on, it has become the consensus in the MSM, in the courts—and in the streets.

Part of this is just the result of MSM gaslighting and deception. By the tens of thousands, Leftist protesters have poured into the streets to demand an end to President Trump’s “Muslim Ban.” The Narrative being promoted by the MSM is that they are taking a stand against religious persecution and in defense of a beleaguered, oppressed minority.

Of course, President Trump has instituted no such “Muslim Ban,” nor anything close to it. Indeed, President Trump’s actions are practically identical to actions President Obama took in 2011.

Nor are Muslims facing a dire, genocidal threat in the Middle East because of their religious belief. The people who actually being systematically exterminated in Iraq, Syria and other Middle Eastern countries are Christians—many of whom were prevented from fleeing to America by President Obama [The State Department Turns Its Back on Syrian Christians and Other Non-Muslim Refugees, by Nina Shea, National Review, November 2, 2015].

President Trump has said he will prioritize refugees from this group in American policy [Trump’s order is a balm for Christians, not a ban on Muslims, by Carol Swain, CNN, January 30, 2017]. But he has received no praise for defending this oppressed community in the MSM. Indeed, even nominally Christian groups have piled on in condemnation and urged President Trump to reactivate the refugee programs, as “many of the country’s most prominent refugee resettlement organizations are faith-based” [Where Christian Leaders Stand on Trump’s Refugee Policy, by Emma Green, The Atlantic, January 27, 2017].

Partially, this is because many of these leaders are more interested in virtue-signaling to the MSM than standing up for their supposed brothers and sisters in Christ. But the profit motive should also not be underestimated. "Refugee resettlement" is a lucrative business. Many of these so-called Christians, to coin a phrase, talk a lot about serving God when they are really bowing before Mammon.

Yet we see little MSM interest in these facts. Instead, we get sob stories (some invented out of whole cloth) about how Muslims have been supposedly victimized by not letting them in the country [Fake News: Man Who Claimed Mom Died Due To Trump ‘Ban’ Lied, by Joel Pollak, Breitbart, February 1, 2017].

The only way the MSM’s Narrative makes sense is if you believe America was founded specifically to invite the entire world to settle here.

And that seems to be precisely what the Left is claiming. The indisputably accurate observation that Islamic settler colonization of Europe has inflicted massive cultural change on the Continent, and therefore America should avoid duplicating these policies, garners a “wow just wow” reaction from privileged journalists who seem to believe such statements should be prohibited. As Scott Greer, author of No Campus For White Men, has pointed out, opponents of the travel ban and supporters of Open Borders seem to believe “immigration is the core principle of the United States” and America is “only great because of its newcomers.” Such an interpretation essentially reads the Historic American Nation out of the history of its own country. 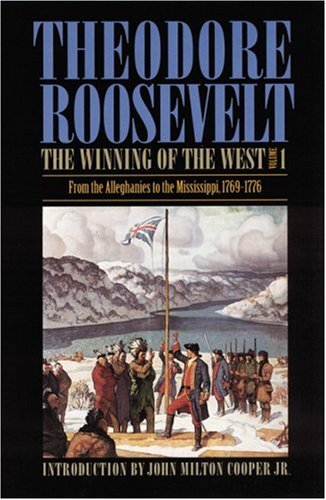 Indeed, some supposedly conservative commentators such as New York Times columnist Ross Douthat [Email him] have made this explicit. He writes that the American story about settling a continent and building a great republic has been transformed into a Narrative about evil whites oppressing everyone. European-Americans were supposed to just quietly die out, but then Donald Trump emerged and spoiled everyone’s plans. Now, Douthat mourns, we have to figure out a way to appease these uppity Anglos without giving them anything substantial:

Trump’s ascent is, in part, an attempt to restore their story to pre-eminence. It’s a restoration attempt that can’t succeed, because the country has changed too much, and because that national narrative required correction. The myth of the “Lost Cause” had to die, the reality of racial wrongs required more acknowledgment, the Judeo-Christian center had to make room for a larger plurality of faiths.

But so far we haven’t found a way to correct the story while honoring its full sweep — including all the white-male-Protestant-European protagonists to whom, for all their sins, we owe so much of our inheritance.

As long-purged National Review Editor John O’Sullivan commented, what Trump did was violate the principle of white dispossession which served as the bedrock of both parties.

Both parties saw it as their responsibility to ensure that this gradual transformation of America’s national identity occurred without violence and undue conflict…[T]his required, and got, a degree of collusion between the parties that took the form of not strongly opposing policies such as affirmative action and not exploiting popular opposition to high levels of immigration and not following through on election promises to do something on such matters. It seemed to work quite well until Donald Trump came along...

[Notes towards the Redefinition of a Nation, National Review, February 9, 2017]

The screams of “no borders, no nation” coming from far-Left protesters is thus not a cry of rebellion, but an affirmation of this pre-Trump Obama-Bush status quo. 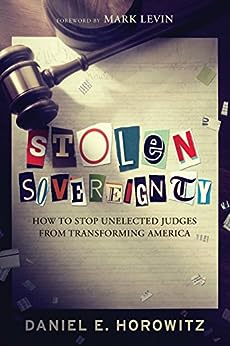 And it is their views, not the president’s, that the courts are imposing on the nation. As Horowitz observed in the piece cited above:

Those radicals breaking windows and beating people up in the streets? Those views are not only represented in Congress but are now codified into law and the Constitution by the misconceived supremacy of the judicial branch of government. As I predicted in my book [Stolen Sovereignty: How to Stop Unelected Judges from Transforming America] within a few years (perhaps less), there will be wholesale judicial amnesty for all of the illegal immigrants in this country under the First and Fourteenth Amendments. It’s already happening in the lower courts. Last night, it was codified into law by the Ninth Circuit when it said illegals have due process rights (to remain in the country).

From the lowest Antifa guttersnipe to the most dignified jurist, from the foul-mouthed celebrity to the congressmen of the Democratic Party, the American Left is utterly united around the principle of European-American dispossession.

In their view, America is a “proposition nation,” but the new proposition is even worse than that expressed in Emma Lazarus’s insipid poem: it is that the country belongs to everyone except the historic American nation that created it.

The courts, the journalists and the Parasite Class of paid activists are trying to make this proposition unchallengeable.

For the Historic American Nation, the battle has become existential. President Trump must overturn this ruling and break the power of the courts and the Ruling Class.

It’s no longer a battle about protecting the nation from terrorism. It’s about whether we will still have a nation left to protect.