Of course, PBS NewsHour touted the documentary, interviewing Goodman, the film’s director. Explaining his interest in the subject, Goodman said:

While I think a lot of people remember this as a simple story of a lone terrorist committing an act, it actually has very deep roots. And when we pulled on those roots, a whole other story sort of appeared.

Goodman’s film began with the devastation of the bombing, interviewing survivors, a mom who lost her lost her son in the nursery, individuals who made heroic attempts to rescue survivors including a doctor who amputated—on the scene—the leg of a woman who was pinned under the rubble).

Then the screen goes black. In white text “The Spark” appears.

Thereafter viewers are presented with images of Aryan Nation chief Richard Butler giving a speech to his flock; of Robert Matthews, the leader of The Order, with a recap of Matthews’ run of political violence and his fiery death on December 8, 1984; the murder of Denver radio personality Alan Berg; and finally William Pierce and the Turner Diaries.

Oklahoma City devotes considerable coverage to what it claims are major incidents impacting McVeigh: the 1992 Ruby Ridge siege; the 1993 siege of the Branch Davidian compound in Waco. Viewers see footage of McVeigh selling anti-government bumper stickers near a gathering of spectators watching from a distance during the 51-day standoff in Waco with federal authorities.

The government’s botched handling of Ruby Ridge, causing the deaths of Randy Weaver’s wife and son, and of the Waco massacre, which resulted in 76 dead—and which even Clinton Attorney General Janet Reno admitted she should have handled differently—enraged McVeigh.[  Reno Sees Error In Move On Cult, By Stephen Labaton, NYT,  April 20, 1993]  Apparently these events were the catalyst that caused him to strike the Murrah building two years to the day after the Waco siege.

Bur the documentary’s claim: there were other “influences” on McVeigh, presented as fact without any new or hard evidence.  Oklahoma City wasn’t just a lone-wolf terrorist act—a young disgruntled Gulf War veteran recoiling from the ruthless treatment that the federal government had used against its own citizens in Ruby Ridge and Waco—but, 22 years later, it shows that a “far-right, white nationalist” movement threatens public safety and American democracy.

Zeskind as is simply identified as a “writer” and Potok as a “journalist” with no explanation of their backgrounds or ideological leanings. Zeskind, in particular, rejects the “lone-wolf” explanation, claiming that it is really about the “movement” (meaning the “far-right, white nationalist, militia” political culture).

What director Goodman deliberately conceals from the viewer:

This has been documented by investigative journalist Laird Wilcox:

In January 1981, Kansas City writer Bruce Rodgers did a story on radical activism for City magazine. He had this to say about Leonard Zeskind:

Speaking freely is something Leonard Zeskind doesn’t do to people he doesn’t know. Call him on the phone and he’ll answer with a near hysterical, “Who is this?” Zeskind needs an answer phone to calm his nerves. Plainly, Zeskind won’t talk to bourgeoisie writers representing The Establishment Press.

The STO [Sojourner Truth Organization] was brought to Kansas City by Zeskind and his wife, Elaine, around 1973. Where they imported it from would be a good guess. Chicago is where the printed arm of today’s STO is published. Both Lenny and Elaine have written for Urgent Tasks: Journal of the Revolutionary Left.

Alternately ridiculed, condemned, feared, pitied or admired, Zeskind does exercise control over his group. They are tight-knit, distrust the press and view everyone outside their group with suspicion. They surface on occasion to distract and intimidate non-violent groups working for social change.

The STO is not well-known by political historians. In fact, a recent study (1979) tracing the development of American radical movements, Power on the Left, does not even acknowledge the organization.

Whatever its origins, somewhere in Kansas City Zeskind gathers a dozen fellow travelers in an apartment decorated with revolutionary banners and a picture of Sojourner Truth. Led by him, the mostly white, mostly female group study Lenin, seek justification for their beliefs, and pay homage to a former slave and 19th century champion of black and women’s rights.

The $PLC and Potok are, of course, well-known to VDARE.com readers. He once claimed on C-SPAN that there is no extreme, militant left. 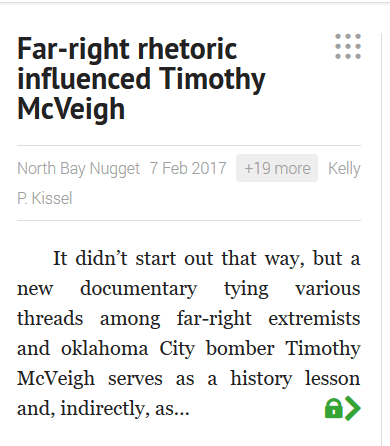 PBS’s NewsHour notes that McVeigh “wasn’t a member of a militia” but then insists that “context is the way to understand him.”  And this “context” is painted with a deliberately broad brush: McVeigh was a “gun enthusiast” who attended “gun shows” (images of gun holstered attendees at gun shows are splashed across the screen).

So let’s get to the point! The Boston Globe’s Peter Keough [email him] helpfully personalizes this sweeping smear:

Now that one of their spokesmen, Stephen Bannon, holds an unelected but extremely influential position in the Trump White House, some might forget that the now relatively respectable alt-right movement has its origins in armed, white power and anti-government groups that inspired the worst terrorist attack in the United States before 9/11.

Barak Goodman's "Oklahoma City" traces the origins of today's right-wing extremism back to the Ku Klux Klan, to the murderous militia group Aryan Nation. It includes the bloody confrontation between federal agents and the armed separatist family compound at Ruby Ridge, Idaho, in 1992 and the escalating standoff between federal agents and the radical religious group the Branch Davidians that ended in a fiery tragedy at Waco, Texas, in 1993.

As for Keough’s claim that “the now relatively respectable alt-right movement has its origins in [Oklahoma City]”—alt-right bogeyman Richard B. Spencer was just 16 in 1995.

And as for Keough’s smear of Bannon—USA Today uncovered no evidence of “racism,” “anti-Semitism,” or “white nationalism” in its review of Bannon’s radio program. [Steve Bannon’s own words show sharp break on security issues, by Steve Reilly and Brad Heath, USA TODAY, Jan. 31, 2017]

So the “context” is: anyone harboring Politically Incorrect thoughts, even innocent American Pastoral gun enthusiasts, will be smeared with Tim McVeigh by the likes of Zeskind, Potok…and Oklahoma City director Barak Goodman.

Treat them with contempt.