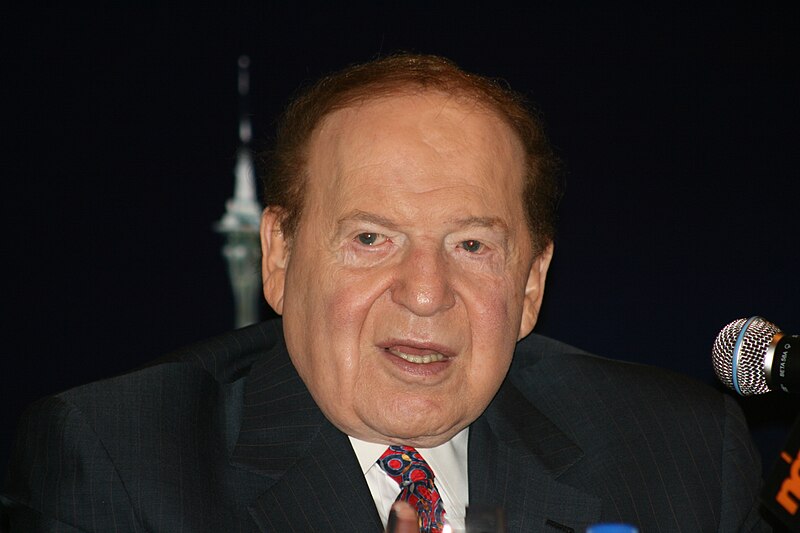 Sheldon Adelson: I bought it ALL!

On Wednesday The Wall Street Journal published probably the most important article of the 2012 election cycle: Sheldon Adelson: ‘I’m Basically a Social Liberal’ By Alicia Mundy, December 5, 2012. It contained decisive (and appalling) news for immigration patriots:

On immigration: “I’m pro-Dream Act, I’m pro the Dream Act. My parents were immigrants to this country,” he said. “What are we going to do? Listen, I’m sure a lot of my parents’ generation …..snuck into the ship and they came into the country.

“So – people will do anything to leave massacres and to leave the economic conditions – they can’t put food on their own table.

“There has been in our history a lot of illegal immigration. Do I approve of it? No, but it’s here.

“It would be inhumane to send those people back , to send 12 million people out of this country to disrupt a whole potpourri of family issues” over what happens to the children.

“I mean it’s all ridiculous. So we’ve got to find a way, find a route for those people to get legal citizenship,” he said.

So there you have it. Adelson wants Amnesty, favors the Dream Act, and has sentimental feelings about illegal immigrants because of romanticism about the experience of his parents’ generation.

And also, one might reasonably surmise, because it keeps down working-class wages. An earlier, more diffuse account of this exclusive interview, Adelson to Keep Betting on the GOP by Alicia Mundy, The Wall Street Journal, December 4, 2012, notes:

What divides Mr. Adelson from the Democratic Party is his stand on unions, which have been unable to organize his workers. His flagship, the Venetian, is the only nonunion casino on the Las Vegas Strip.

Mr. Adelson said he was likely to continue funding state-by-state efforts to curtail organized labor's power, in particular by trying to overturn their use of collective bargaining agreements…

What distinguishes Sheldon Adelson from a pack of other American-despising billionaires like Michael Bloomberg is of course the scale of his spending on allegedly Republican causes. The Dec 4 WSJ article reports that the Adelsons

In addition, Mr. Adelson gave about $50 million to nonprofit conservative advocacy groups that don't have to disclose their donors, including the Kochs' Americans for Prosperity and Karl Rove's Crossroads GPS, according to GOP fundraisers and people close to Mr. Adelson

This proclivity will not surprise VDARE.com readers. As I pointed out in Has Romney Sold Immigration Policy To Sheldon Adelson? the balance of probabilities was always that such a large-scale employer of unskilled labor as Adelson is in his Casino operations would be a Cheap Labor Lobby member. The Wall Street Journal has now provided categorical proof.

The WSJ also provided proof that Adelson is hostile to many aspects of the Republican agenda cherished by the rank and file:

“I’m prochoice…Abortion shouldn’t be brought up as a political issue… I’m in favor of a socialized-like health care."

Dislike of Rick Santorum’s abortion beliefs was said to have influenced Adelson’s spending on Newt Gingrich. But it was obvious all along that Gingrich’s  politically wierd pro-amnesty stances in the Primaries was at the behest of Adelson, who put up most of the money for his campaign.

Now it also seems clear that Adelson’s subsequent heavy cash infusions into the Romney campaign bought the disastrous failure to challenge Obama’s Amnesty Coup D’états and possibly the Chick-Fil-A Wimp Out – Politico reported that was caused by donor preferences.

Very likely the smell of his money—or similar money—answers the question I asked back on September 15:  Immigration And Administrative Amnesty: What Specter Is Haunting The GOP? The strange unwillingness of the 112th Congress House leaders to accommodate their supporters’ wishes in matters such as E-Verify or Official English becomes comprehensible in light of the fact that Adelson’s first major political investment was Gingrich’s ludicrous Hispandering efforts back in 2006.

Why suddenly is there profuse documentation available of Adelson’s anti-American immigration enthusiast proclivities after an election season of virtually total silence? (I know—I was watching). And, at the risk of seeming paranoid, why has The Wall Street Journal been forced into the professionally bizarre situation of having to essentially republish the same interview—making clearer what Adelson wants?

My theory (remember I’ve been proved right about Adelson): a campaign is underway to advertise to GOP operatives that Treason has rewards. The WSJ’s second article simply made the requirement list clearer.

On Dec 6th the WSJ confided

Since the elections, the Left blogosphere has been choked with raucous jeering that Adelson wasted his money in 2012. But in fact the reverse is true. His money probably quite likely ended any possibility of the GOP campaigning in 2012 as what VDARE.com calls the Generic American Party —what he would no doubt decry as being Nativist.  Adelson lost on no major policy issue that he cares about.

It was the Americans who lost.

After all, where in the Establishment Media, liberal or “Conservative,” have you seen these facts laid out?