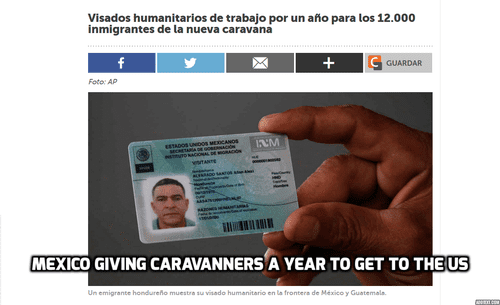 SAID IN SPANISH: While Wall Stalled, More Central American Caravans Are On The Way

Spanish-language media is full of reports of another 12,000 Central Americans trudging north, aiming to crash the U.S. border. [Visados humanitarios de trabajo por un año para los 12.000 inmigrantes de la nueva caravana (Humanitarian work visas for one year for the 12,000 migrants of the new caravan) by Bruno G. Gallo, Telemundo, January 24, 2019] The clock is ticking. In three weeks, if Trump doesn’t do what he said he would—above all, build a wall—his historic presidency is finished and his re-election is doomed. Along with America.

In fact, more than one caravan is reportedly headed this way, each filled with thousands of undocumented Democrats hoping for a job and the goodies that come with being an illegal alien in America on a phony asylum claim: a free public education and free health care.

While the vanguard of the new caravan has reached the southern Mexican state of Oaxaca, plenty more Central Americans wait at the Mexico-Guatemala border. Mexico will determine how many get to our border and has now provided the means for them to do so.

The government of President Andres Manuel Lopez Obrador is granting one-year “humanitarian visas.” That gives the caravanners ample time to make their way north and probe our border’s weak spots.

Why do the visas matter to us? Again, as Telemundo’s Gallo reported, these caravans are getting bigger:

The caravan of Central American migrants which has arrived to Mexico in the last few hours is even bigger than the one last fall that brought the United States to deploy its army on the border. There are  11,686 persons, among them 2,198 minors, who have solicited a humanitarian visa from the government of Andres Manuel Lopez Obrador. The majority of them are Hondurans, according to the INM [Mexican immigration bureaucracy].

Yet Gallo also reported that Mexico “is closing its southern border with Guatemala to avoid the uncontrolled arrival of immigrants,” a doubtful claim given just how porous the border is.

Mexican Interior Secretary Olga Sanchez Cordero recently reported that Central Americans can enter Mexico through just 12 legal points. Yet Mexico has detected some 370 major illegal border crossings, and those are just the ones they found.

That was a two weeks ago. Has Mexico plugged all those holes? After all, when the spearhead of the latest caravan crossed into Mexico, some impatient Hondurans crossed illegally, as usual.

But what matters is that Mexico offers legal passage north. The Daily Beast explained it with this subhead: “Trump won’t be happy, but the country’s new government is giving migrants permits to stay, work, and travel—and many want to go to the United States” . [Mexico Made It Easier for Migrant Caravan to Get to U.S., by Maya Averbuch, January 25, 2019]

Marcos López Mejia, 29, one of the caravan’s early recipients of the visas, said he had heard of other people from his Honduran port city of Trujillo who had made it to the U.S. border. His newly minted legal status would allow him to save up money to travel on his own, though he is considering waiting for permits to be issued to the thousands of other migrants.

As well, Lopez “had heard of other people from his Honduran port city of Trujillo who had made it to the U.S. border.” He explained how Mexico’s new visas bonanza changed his thinking:

“My plan was to get here and continue with the caravan, without papers, to the border of the United States,” he said. “We used to believe that the safest way to travel was with a smuggler. Now we don’t have to avoid immigration agents, and we can hop from one bus to the next.”

López Mejia had seen Mexico’s past immigration restrictions firsthand. In 2015, he left behind his barber shop and paid a first installment of $1,500 to a smuggler to take him to the United States, only to be deported from southern Mexico, presumably because he had not shelled out enough cash. This December, he made calls to coyotes, but was told it would cost him $11,000 to get to the United States. The price was far too high, so he left for the caravan instead.

Obviously, if Lopez and his migratory countrymen can travel cheaper, they will. Armed with visas and inside a caravan and carrying, they can enter Mexico legally and travel safely. They needn’t pay smugglers, nor fear dangerous road agents. What a deal!

As  Andrew Selee [Email him] president of the Migration Policy Institute, explained to The Washington Post, “if word gets out that people are able to get in legally, to work, that creates a huge incentive for people who hadn’t thought of migrating”. [More than 10,000 migrants request visas as caravan hits Mexico, by Mary Beth Sheridan and Sarah Kinosian, January 23, 2019]

Yet the ocean of migrants is just one problem for Mexico. The other is what to do about those sent back,  under the Trump administration’s just-announced Migrant Protection Protocols, to await adjudication of asylum claims. Ninety percent of those, the MPP briefing paper reports, are bogus, which means that 90 percent of the migrants are really illegal aliens. [Migrant Protection Protocols, DHS.gov. January 24] Which in turn means — or should mean — they don’t get back in.

But Mexico announced on January 25  that it rejects such a policy even if it allows some refugees to wait, exactly what it said before.

On one hand, Mexico won’t accept our “unilateral decision” to return migrants who applied for asylum in the U.S., because that would require Mexico “to process on our territory all the asylum requests in the United States, making us fully responsible for the judicial situation of foreign citizens” . [México rechaza decisión unilateral de EU de devolver migrantes (Mexico rejects unilateral decisión of the U.S. to return migrants), by Ernesto Mendez January 26, 2019]

On the other hand, Mexico’s government “would admit the entrance of certain foreign persons coming from the United States that have received a citation from a migratory judge, through permits for humanitarian reasons that, in a temporary manner, permit these persons to regularize their stay in Mexico.”

So AMLO’s government seems to of two minds. It has simply restated that it has no agreement to accept the migrants, but will take those awaiting adjudication case-by-case. However, Mexico will not accept sick migrants or unaccompanied minors—who, it should be noted will have already crossed through the length of Mexico to reach the U.S. border.

As of the 25th, the U.S. had delayed the return of asylum petitioners to Mexico.

What do we do about this Camp of the Saints invasion?

Mexico is obviously worried about what we might do. But we can’t depend on that. We need more border barriers, a reformed asylum policy insulated from the Treason Lobby’s never-ending lawfare, and, of course, a massive increase in the number of deportations. As long we allow “migrants”—meaning illegal aliens—to file phony asylum claims, the word will keep getting back to their home cities, towns and villages that the door is wide open.

Declare a national emergency, Mr. President, and build the Wall.

Your presidency, and our future, depend on it.