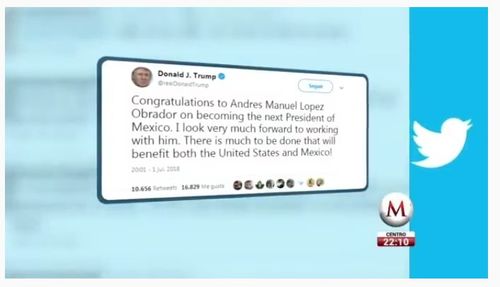 And it was a resounding triumph.  To win a Mexican presidential election, a candidate need only have more votes than any other candidate, so a majority is not required. But AMLO won with 53.48%, according to current calculations.  Runner-up Ricardo Anaya had 22.58%.

President Trump  was quick to congratulate  AMLO, sending out a Tweet which said:

For his part, AMLO called Trump’s Tweet “respectful” and pledged that “We are going to extend an open hand to seek a relationship of friendship and cooperation with the United States.”   [AMLO ofrece tender ‘mano franca’ y buscar amistad con Trump, Excelsior, July 2, 2018]

The Mexican presidential term lasts six years, with no reelection, There is a five-month period between the election and inauguration of the new president. So AMLO is set to take office on December 1st.

Congratulations to AMLO. I wish you the best.