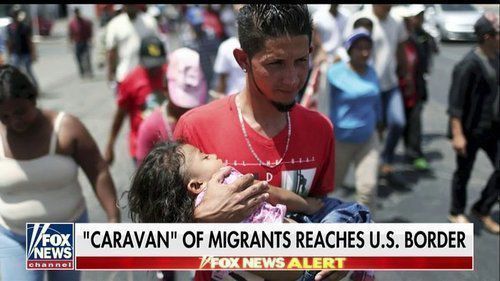 How to Deal With Flash Mob Caravans

From my Taki’s Magazine column “Gradually, then Suddenly” of September 30, 2015:

Here are a few suggestions for America:

First, any asylum seekers who show up in America uninvited should be immediately flown to a safe haven where their application and the authenticity of their documents can be investigated thoroughly. I’d nominate the U.S. military’s Soto Cano Air Base in Honduras, where a hygienic tent city could be set up on its 12 square miles of fenced-in grounds. Authentic refugees would appreciate the security of being protected by the world’s strongest military, while the usual crowd of fraudsters would be discouraged by finding themselves right back in a banana republic, 1,525 miles from the Texas border.

Second, use social media. These are not particularly formidable people who are trying to overwhelm us. They tend to be superstitious, … and easily spooked by evidence that they aren’t welcome.

Set a concrete limit on the total number of immigrants that will be allowed into the US per year. Make it known that “migrants” and “refugees” will count as part of that number, thus reducing visas and opportunities for everyone else’s favorite race or interest group.

The point of this is to use divide-and-conquer strategies to set ethnic lobbies in the U.S. battling one another over a finite pie, instead of the present policy of encouraging everybody to rhetorically gang up on straight white men as the source of all evil. This policy would incite the Muslims to point out why America would be nuts to let in more Hispanics, and vice versa.

Fifth, as my reader Alfa 158 suggests, the U.S. government could easily penalize elites in the sending countries:

If applicants are denied refugee status and their home country refuses to accept them back, stop issuing any visas for that country. Even the elites who don’t want to emigrate here will hate the idea of not being able to send their kids to school in the US, or make the occasional luxury shopping spree trip.

Much of the Mexican ruling class, for instance, is vulnerable to being denied visas to visit the luxury homes they’ve corruptly acquired in Texas, Florida, and New York. Trump Tower, for instance, is likely home to Mexican elites who could be pressured into cooperating with American border protection the way Egypt and Jordan cooperate with Israel.

Sixth, and most of all, the U.S., like other Western democracies, needs new elites. While there is quite a bit that patriotic citizens can self-organize to accomplish in their own defense, nothing compares to the luxury that Israelis enjoy: a government that is on the side of its democratic majority.

Post
The Triumph Of Ibram X. Kendi's Logic: The Kids MUST Be Equal, So The Tests Are At Fault
MORE...
POPULAR TAGS