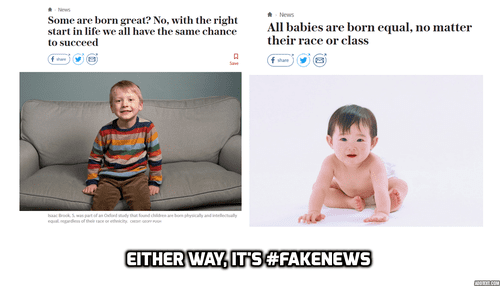 The Daily Telegraph is Britain’s only serious right-of-center newspaper. And, now that the London Times’ website is imprisoned behind a paywall, it is increasingly becoming the UK’s “newspaper of record.” This makes a front-page article of this week all the more dangerous.

The piece in question, posted on the Daily Telegraph website at 10.43pm January 23 [Some are born great? No, with the right start in life we all have the same chance to succeed, by Margarette Driscoll], must rank as the most misleading and intellectually-dishonest article to ever appear on the front of a newspaper, at least in a democracy. The fact that it could ever be written is evidence either of an incredible level of scientific illiteracy, the most fanatical anti-scientific bias, or a breathtakingly naïve and sloppy journalist who has suspended all her critical faculties in the face of Social Justice Warriors masquerading as scientists. And in this case, the SJW leading the research has been proven to be dishonest as well.

Beneath a photo of smiling (white) boy, the caption reads, “Isaac Brook, 5, was part of an Oxford study that found children are born physically and intellectually equal, regardless of their race or ethnicity.” (However, for some reason a shorter version of Driscoll’s piece, published at 10.17pm, used an image of an East Asian baby, despite no babies from this race being involved in the study). Anyway, Driscoll goes on to pronounce that the debate over whether or not race differences in average intelligence are genetic is now over.

Apparently, Isaac is one of, “1,300 children in five countries—Brazil, India, Italy, Kenya and the UK—whose growth and neurodevelopment has been tracked and compared from the earliest days in the womb until the age of two.” Driscoll explains that the “Intergrowth-21st Project,” which is led by scientists at Oxford University, has “shown for the first time that children are born physically and intellectually equal, regardless of their race or ethnicity. Given good living conditions, good food and education, babies thrive, wherever they live and whatever the colour of their skin.”

This is a quite mind-blowing claim insomuch as it has been widely documented that black babies reach early developmental milestones more quickly and that they have a different average body type.

In other words, even putting aside the color of their skin, they are born being physically different from whites and, also, physically and intellectually more able when they are very young, as, at this age, physical and mental development work in parallel.

As J. Philippe Rushton has shown, blacks follow a faster “Life History Strategy,” meaning they peak, intellectually, at a younger age. Northeast Asian babies are even slower to reach early milestones, such as walking, than are whites, but they ultimately overtake whites intellectually, as seen in their high average IQ. [Race, Evolution and Behavior, by J. Philippe Rushton, p.147-148; p. 5]

So London-based freelance American journalist Margarette Driscoll’s summary, so far, is completely ludicrous. But maybe she’s misunderstood the science—journalists are notorious for their scientific ignorance [See Communicating Intelligence Research: Media misrepresentation, the Gould Effect, and unexpected forces, By Michael Woodley of Menie et al., Intelligence, 2018].So let’s look at the researchers actually have to say in her article:

That healthy mothers have healthy babies is not very surprising. But the children in the study were monitored from when they were fetuses to when they were aged two. That they grew at the same rate is surprising, because you would expect there to be individual differences in genetics and these would have an impact on physical and mental development, because physical and mental development are both strongly genetic.

The implication of this is there are no genetic differences in intelligence between individuals—so all the twin and genetic studies that show a strong genetic dimension to intelligence are either fraudulent or have made serious errors—nor between races. Indeed, Margarette Driscoll quotes one of the researchers on this:

“There’s still a substantial body of opinion out there in both the scientific and lay communities who genuinely believe that intelligence is predominantly determined by genes and the environment that you’re living in and that your parents and grandparents were living in and their nutritional and health status are not relevant,” says Prof Kennedy. “Well, that’s clearly not the case.”

So, Driscoll hasn’t misunderstood anything. These “scientists” believe that their project has disproven the many twin and genetic studies. It seems intelligence is 100% to do with environment and so, manifestly, race differences in IQ are likewise.

And it should be stressed that these are not “social scientists,” who these days are generally little-more than PC-ideologues. These are medical scientists at a “world-leading university.” Stephen Kennedy is Professor of Reproductive Medicine at Nuffield College, Oxford University. How can these “scientists” have reached this laughable conclusion?

The answer seems be: Through their own extreme bias, meaning that they cannot see the planet-sized flaws in their study. Driscoll reports: “Where mothers of a similar social, economic and health status are compared, the Oxford team has shown, healthy Indian and African babies will grow at the same rate as healthy, well-nourished Britons.”

So, Kennedy et al. are controlling for SES. But there are big race differences in SES and SES is very significantly a matter of IQ, which predicts 50% of the variance in it. [see At Our Wits’ End, By Edward Dutton and Michael Woodley of Menie]. If you control for SES, then, due to blacks having lower average SES, the black will sample will represent an acutely intellectually elite and unrepresentative sample of blacks. The white sample will, however, be, relatively-speaking, more representative of whites in IQ terms, because whites have higher average SES, so a smaller percentage of whites are being eliminated from the sample.

But these Oxford researchers hadn’t finished their mind games yet. Apparently, at the age of two the children were given a series of cognitive tests:

“Cognitive development was also assessed by placing an attractive object under one cloth, then another, then asking the child to find it. If the child immediately lifted the second cloth, it showed they had been able to follow the sequence of moves. “There are no zero scores,” says Dr [Michelle] Fernandes [the Oxford researcher who devised the tests], “because the child is always able to do something, whether it is building a tower, but with only three blocks, or searching for the beads under the first cloth.”

In other words, the test is so simple that all the children can pass it. Which means that the test is not assessing differences in intelligence at all. If everyone in a sample of 1300 people scores 100% on an IQ test, that doesn’t mean that everyone has the same IQ. It means that the test is too easy to assess individual differences. It’s like weighing 1300 people with a scale that only goes up to 5 pounds and thus concluding that they all weigh the same.

So, due to selection bias and a terrible assessment test, these “Oxford University scientists” have proven absolutely nothing other than their own dogmatic environmental determinism and problems with basic logic.

Their “study,” by the way cannot be found online—because, clearly, no “study” has been peer-reviewed and published. The use of the word “study” is yet more misleading journalism or misinformation from the research team. The researchers appear to have simply written to a freelance journalist to tell her what they’ve found and this journalist has completely failed to in her duty to be critical.

Driscoll herself has been found to be slap-dash in previous writing, mixing-up two completely different books for example.

No, Margarette Driscoll! BRING UP THE BODIES is a totally different book from WOLF HALL. Perhaps the judges simply thought it the best?

Consistent with how politically and personally motivated these “scientists” are, the UK’s General Medical Council—despite itself having a PC orientation [Time for radical revision at the UK General Medical Council, By James Appleyard, The Lancet, May 20, 2006]—found them guilty of academic misconduct in 2017 for stealing other people’s (specifically World Health Organization researchers’) ideas [Research misconduct and the INTERGROWTH-21st study, By Richard Horton et al., The Lancet, February 2017], something the Daily Telegraph didn’t even report.

In other words, Professor Kennedy is a liar and a thief.

Prof Kennedy is a sufficiently avid reader of the rabidly left-wing Guardian newspaper to have had letters published in it. So maybe Prof Kennedy knows his conclusions are nonsense but simply wants people to believe them for his own political reasons.

I’ve reported before on the infiltration of hard science by hard-Left fanatics. But this case really is extreme and deeply worrying.

No thinking person could conclude from story “that there are no genetic differences in individual or average racial intelligence.

The reasonable conclusion: you shouldn’t trust even some mainstream scientists, nor MSM journalists who tend to be obsequiously uncritical of them, when it comes to these crucial areas of research.

Oh, and that it is increasingly questionable to claim, as the 900-year old university does on its website,  that Oxford University is a home of “academic excellence.”

Footnote: coincidentally, on January 26 the Daily Telegraph also published Melania Trump—An Apology, a groveling apology for an earlier article (“As a mark of our regret we have agreed to pay Mrs Trump substantial damages as well as her legal costs”.) Of course, U.S. libel law was sabotaged by the Supreme Court’s 1964 Sullivan decision, judicial legislation designed to rescue a clearly-guilty Civil Rights group from a segregationist Southern sheriff. Regardless, it was a bad week for standards at the Daily Telegraph.