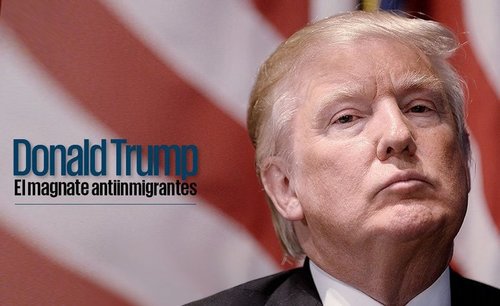 What’s been going in the Spanish-language media the past month? As you’ve probably guessed, plenty of Trump-trashing—and more Hispanic hypocrisy, especially about Birthright Citizenship.

Donald Trump’s open defense of American sovereignty has the Mexican chattering class on edge. As well it should. They recognize what Trump might be able to accomplish, and they don’t like it.

One noteworthy trasher: Eugenio Derbez, a well-connected comedian and nephew of a former Mexican foreign minister. He said:

“They [Trump’s] are totally racist commentaries and I am sure that the day that Mexicans aren’t in this country [the U.S.], Latinos in general, the day that they are deported, the country will stop. The Latinos are the force that moves the United States.”

My emphasis. “The force that moves the United States”? Can we ask where?

Naturally, several of these celebrities boasted about the much-touted Latino Vote. 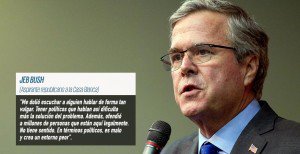 Maduro, protégé of the late Hugo Chavez, said of Trump: “That type of person generates madness against our beloved Latin American People.” 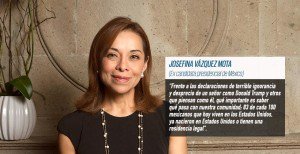 In the face of the declarations of terrible ignorance and disdain of a gentleman like Donald Trump and others who think like him, it’s important to know what’s happening with our community: 83 of every 100 Mexicans who currently reside in the United States, were born in the United States or have legal residence.

The much-hyped attack on a homeless Hispanic man provided fodder for the new presidente of the PRI, Mexico’s governing party:

After the attack that an indocumentado of Mexican origin suffered in Boston, the national leader of the PRI, Manlio Fabio Beltrones, called for a confrontation of ideas with populist demagogues.

And Mexican political leaders know a lot about populist demagogues.

Manlio Fabio Beltrones condemned the aggressions of the brothers Scott and Steve Leader, sympathizers [Allegedly—AW] of the Republican primary candidate Donald Trump, who beat and afflicted an indocumentado of Mexican origin in Boston, Massachusetts and [Beltrones] affirmed that the discourses of hate only generate violence.

But who in the U.S. is defending the Leader brothers? And when has Beltrones lamented the many violent crimes committed by illegals against Americans?

Beltrones actually met with Mexican congressmen about the issue and later declared in a communique:

“That type of populist demagogue that unfortunately is emerging in various places and with distinct masks, they have in common that they generate violence, rancor and they are a risk to democracy…”

Speaking to members of his political party, Beltrones asked the PRIstas to be attentive to the debate of current topics and to meet with citizens with ideas and proposals that unmask the populists of one or another political persuasion.

My emphasis. Note that Beltrones is making no distinction between the Mexican and U.S. political realms.

“The PRI makes the cause of the Mexican migrants its own, as they form an indissoluble nucleus of our society, in that they provide remittances and cultural richness.”

My emphasis. This is a startling admission by the leader of a Mexican political party—especially because for the first time a major U.S. presidential candidate has called the Mexican government to account for its exploitation of emigration to advance its own interests at American expense.

My suggestion: Trump should also condemn this Mexican meddling in U.S. affairs, through its consulates and its openly claiming the loyalty of Mexican-Americans via its citizenship law.

Prediction: If Trump continues to advance, watch for more meddling by the Mexican government to stop him. They may already be working on it.

This was the day before Donald Trump’s position paper officially challenged automatic birthright citizenship and was principally written in response to comments by New Jersey Governor Chris Christie [Christie no longer sure about birthright citizenship, by Steve Benen, MSNBC, August 12, 2015]

According to La Opinión’s Benen:

Throughout all the history of the United States, those born here automatically acquired U.S. citizenship regardless of who their parents were, a practice consecrated by the 14th amendment to the Constitution.

Not exactly, but moving on…

But every so often, and generally every four years during the presidential contention, somebody considers that it’s a good idea to suggest that this privilege should be removed from the children of inmigrantes sin papeles [immigrants without papers] as a type of punishment to the parents for coming illegally.

Benen then listed the Republican candidates and their positions—the implication being for Latinos to vote against anyone who opposes birthright citizenship.

What about Mexico? Trump is being criticized for saying that it doesn’t have birthright citizenship when, technically, it does. But my own experience suggests this is pretty darn technical.

In Mexico, it’s always important to check what the law says against what actually occurs. The Mexican Constitution (Capitulo II, Articulo 30 pdf., on p.26 of 170) does stipulate  that any baby born in Mexican territory, regardless of parentage, is Mexican—automatic birthright citizenship. But my two sons were born in Mexico.   Each baby’s Mexican birth certificate was issued to my wife and myself by a Mexican registrar. However, since I was a foreigner, the registrar required me to show my Mexican work permit in order to process the paperwork!

In other words, I had to prove I was in Mexico legally for each son to have a Mexican birth certificate!

When our second son was born, this process was temporarily derailed. My Mexican work permit was being renewed for the year, so it was temporarily out of my possession. The registrar would not issue the birth certificate until I had showed her my work permit. It took us several more weeks to obtain it.

So Mexico, although technically offering automatic birthright citizenship to children of illegal aliens and other foreigners, has in practice a way of getting around it. It can just refuse to issue birth certificates if one or both parents are not in the country legally! How very clever!

And note that, in our case, one of the parents, my wife, was a Mexican citizen, yet the child still didn’t automatically receive the documentation!

Ironically, what happened to us resembles what’s going on now in some jurisdictions of Texas, where birth certificates are being withheld from anchor babies on an ID technicality.

Needless to say, the Mexican government opposes this and has filed an amicus brief in the inevitable lawsuit.

What Latinos Miss After Moving To The U.S.

Ever find something on the Internet and you don’t even remember how? I ran across this interesting article on iMUJER a women’s Spanish-language website aimed at Latin American women living in the U.S.: 5 cosas que los latinos extrañan al mudarse a Estados Unidos [Five Things that Latinos Miss After Moving to the United States, by Sofia Gabarrat. Accessed August 28, 2015].

Gabarrat explains: “Leaving one’s country is not easy, even less so if you emigrate to a country where the culture is so very different, as occurs with the Latinos who move to the United States.”

In Latin America we don’t have so many rules, don’t you think? From riding a motorcycle without a helmet, to selling homemade food that you prepared in your own home in the street…... ¡Libertad! We all know that liberty presupposes that we should take care of ourselves more, but that is a price that we love to pay to do what we want to do.

Having lived in Latin America, I understand. I even sympathize. But it does show that most Latin Americans come to the U.S. for the money—not for freedom.

There’s a simple, human, and mutually respectful solution to this problem of a culture clash. Latinos who live in the U.S. and don’t feel they fit in should not try to take over our culture. They should consider moving back to Latin America, where they can be immersed in their own culture every day.

They can hear the music, they can buy from the street vendors, they can revel in the Latin American style of liberty.

That’s what different cultures and countries are for.