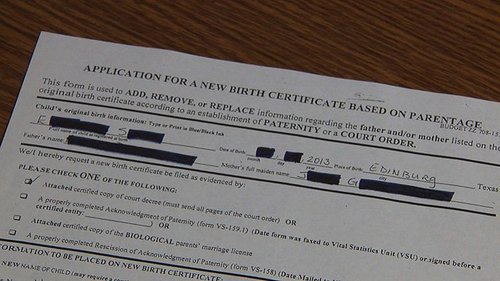 And guess what? The Mexican government has gotten involved in the lawsuit by filing an amicus brief. What a surprise! From the Texas Tribune:

The denial of birth certificates to U.S. citizen children born to immigrant parents not only jeopardizes their dignity and well-being, but could threaten the unique relationship between Mexico and Texas, the Mexican government said in a brief tied to a lawsuit filed against the state.

What relationship between Texas and Mexico? The former is a state, the latter is a country.

The Mexican government filed its amicus brief late Monday [August 24th] in support of a coalition of undocumented parents who are suing the state of Texas after they were denied birth certificates for their children.

The brief says that “friendly nations” have a history of accepting foreign passports or government-issued IDs to facilitate the identification of a foreigner.

“Conversely, expressions of doubt about the integrity of documents issued by a friendly country introduce a troublesome and discordant element into binational or transnational relations,” the 19-page court document states.

The lawsuit is growing.

Attorneys with the Texas Civil Rights Project and Texas RioGrande Legal Aid filed the lawsuit against the Department of State Health Services on behalf of six U.S. citizen children and their parents who are undocumented immigrants from Mexico, Honduras and Guatemala. The original complaint was filed in May and has been amended twice to include more than 30 families. La Unión Del Pueblo Entero, or LUPE, an immigrant rights group with about 7,000 members, has also joined the lawsuit.

And here's another argument by the government of Mexico.

The amicus brief also claims that denying the children U.S. birth certificates also blocks their claims to Mexican citizenship. A child born to Mexican parents has that right but must show proof of identity. Infringing on that is a violation of international law, the brief states.

Mexicans are very knowledgeable about the anchor baby phenomenon, more so than Americans, and they know exactly what they are doing. The Mexican government is closely following the whole debate about Trump, anchor babies, etc., and they are concerned about it.

But it's our citizenship law and Mexico should have no say whatsoever in the matter. We need to plug up the anchor baby loophole, and pronto.