The city of Los Angeles has long surrendered to the demands of its scofflaw residents in many arenas, one being the presence of unlicensed street vendors. Many are foreign, as hinted in Monday’s front-page LA Times article where the diverse sellers speak Spanish and offer Mexican food items. 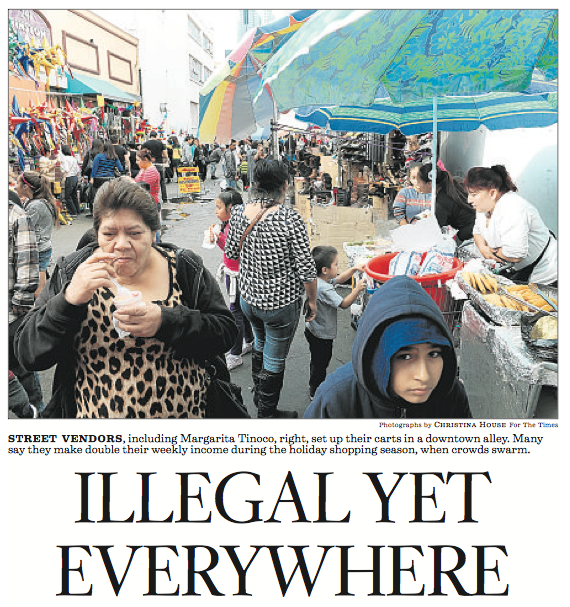 As is often the case, reader comments are more astute than the official article. Many called attention to public health threats caused by the lack of basic hand-washing and other sanitation standards that brick-and-mortar businesses must follow:

If I tried to operate a brick-and-mortar restaurant in this fashion, I would be FINED and SHUT DOWN by the health department. Even food trucks have to have hot running water for operators to ROUTINELY wash their hands with soap and water. Restaurant operators must spend their own money to take courses to be certified in safe food handling methods, spend THOUSANDS on county/city health permits and other licenses.

Vendors who are unlicensed, unregulated, untaxed and could potentially give their customers food poisoning is something that should not be supported. I know many turn a blind eye to this sort of thing but just remember they are undercutting lawful businesses WHO DO pay taxes and one of them could be the next ‘Typhoid Mary’ waiting to serve you up a taco.

Everyday LA looks more and more like the poor ghetto sections of MEXICO. Mexico has their rich and upscale cities and those communities wouldn’t allow anyone to sell merchandise or food like they do in LA. As the leaders of LA allow this activities to continue it will just get worst and worst.

Also not mentioned is how the surge of illegal pop-up sellers shows the failure of the economy to supply adequate jobs for citizens and newbies alike — see my September blog, Los Angeles: Street Vendors Increase Because of Unemployment. The jobless recovery indicates that the nation does not need increased immigration but rather far fewer imported workers.

A society cannot have just a little lawbreaking. Government permissiveness incites more lawlessness, particularly among those who reside in the country illegally and have ready excuses for every rip-off they commit.

Los Angeles shows the pathway of lawlessness and no borders to America becoming Third World.

The young boy tugged on his mother’s shirt and begged for a shaved ice treat from Reyna Silva, who waited for customers behind her humble green push cart.

“Yo quiero raspado,” the boy in a Superman shirt repeated once, twice … six times, using his powers to break his mother’s will.

Silva, 44, scraped ice from a large frozen block into a cup and doused it with lime flavoring. The street vendor had been standing in a busy downtown Los Angeles alley for hours already this weekday afternoon, hoping to scrape a living from Christmas shoppers looking for deals.

For street vendors like Silva, the Christmas season is their version of Black Friday, except there’s no such thing as a big-ticket item — no $1,500 wide-screen TV’s, $225 Nike Air Jordan sneakers or $70 Lego sets. They cobble together a livelihood seven days a week on tiny-ticket items: shaved ice, tacos, corn on the cob, orange juice, bacon-wrapped hot dogs.

Some hope to pay for Christmas gifts that in many cases their own little girls — or boys in Superman shirts — wish for. But vendors like Silva say there are more pressing needs.

“I have to work to pay my rent, my bills, clothes and for food — to provide the basics for my son,” she said. “We’re all trying to find ways to make a living.”

And they have to do it without getting in trouble with police. However ubiquitous they are in much of L.A.’s vast urban landscape, street vendors like Silva are operating illegally. They have to be as ready to scatter when a police cruiser drives by as they are to make a sale.

Earlier this month, an L.A. council committee took a step toward legalizing and regulating street vending, discussing how sellers could obtain city permits. The plan has unleashed fierce debate over whether to legitimize the underground — but anything but secret — economy.

While some neighborhood councils support the plan, others such as Studio City Neighborhood Council members say they are against having street vendors in Studio City — legal or not.

“Putting street vendors in would only, in our opinion, cause more of a traffic jam and hinder people and perhaps become a real issue with cars and pedestrians,” said John Walker, president of the Studio City Neighborhood Council. “Some want them and probably have the room for them. We simply don’t have the room for them.”

But the potential legitimization of the city’s underground economy is raising hopes among illegal vendors who work in fear of being fined and having their wares and carts confiscated.

Carlos Chavez sells tacos out of a baby stroller, which is convenient for quick getaways. When a customer asks for a soda, the 50-year-old explains that he can’t carry too much product because it could get taken away by police. He’s lost his cart in busts at least six times, Chavez said.

“The people sometimes help me run away, but I don’t always get away,” he said. “They take it, and that’s it. I can’t fight back against the police.”

Chavez said he wishes the city would legalize his work.

“We would gain money, and so would the city,” he said. “And we wouldn’t have to worry about running anymore.”

Street vendors say business almost doubles during the holiday season. Silva said she makes as much as $500 a week this time of year, but about $200 less the rest of the year. As Christmas approaches, more vendors appear, ratcheting up the competition for shoppers looking for deals at stores selling boots, flashing, discount toys, beauty supplies, cellphone accessories.

Not far from the alley, a long line of downtown L.A.’s homeless queued up outside the Cardinal Manning Center.

In the alley where Silva has worked for 18 years, near Los Angeles and Fourth streets, the signs of Christmas were everywhere. People carried snowman piñatas or wrapping paper tucked into black shopping bags.

Hanging behind Silva were rows of piñatas reading “Merry Christmas,” as well as a small “X-mas Sale” sign. Shoppers wandered the stores lining the alley, arms heavy with Christmas booty — skirting the puddles and soaked cardboard boxes in the middle of the walkway.

Shoppers walked around vendors working out of strollers, shopping carts and coolers. Some vendors wore aprons secured around their neck and hair pulled back into a tight ponytail or bun to keep any of it from touching food. Several wore a pouch around their waist for money.

Betty Ramirez, a Pomona resident, spent a day walking from store to store, shopping for her sons and other family members. After purchasing shoes, clothing, sweaters and makeup, she stopped to buy a quesadilla from a group of women set up under multicolored umbrellas.

“I prefer them to sell something and you’re buying it, instead of them asking for money out in the street,” said Ramirez, 38. “At least they’re trying to make some way of life to provide for their own home.”

Jesse Morales, 17, has helped his mother, Reyna, every weekend for the past six years. He calls himself the “cashier,” collecting the couple of dollars customers pay for corn, plantains and fried pork skins, or chicharrones, she sells when it’s too cold for raspados.

Since his father was deported after being caught street vending about five years ago, his mother has worked alone to support them. The teenager said he doesn’t expect Christmas gifts.

“There’s one less person in the family,” Morales said, “and my mom has to support me and herself, and my dad isn’t helping us anymore.”

Helene Federici, whose window overlooks the alley, says she’s seen an increase in illegal street vending in the past three years and is considering relocating.

“It’s had an incredibly negative impact on my life – the noise, the garbage, the smell,” said Federici, 37. “I can’t live or work like this … I wish they would just leave our neighborhood alone.”

When two LAPD police officers showed up at the end of the alley on a Sunday afternoon, Silva and other vendors ran off and hid. The only clue they left behind was the lingering smell of food.

This day, the officers walked down the alley and only warned the remaining vendors to leave. They can decide to warn vendors or confiscate items, he said.

“If they don’t want to listen or we have to come back a second time around and they obviously didn’t make any effort to remove the items, then at that point we have our options open to us,” one of the officers said. “But everyone’s listening to us, everyone’s moving, so this is not a real issue right now.”

Less than a minute after the officers headed back to their cruiser and drove away, vendors reappeared. Silva said she’d rather not be breaking the law.

Across from Silva, Nicole Trevino, 21, fried up vegetables and bacon-wrapped hot dogs on a miniature stove in an aluminum-foil-covered shopping cart. Last year she sold DVDs, and this year she began selling food.

Trevino said she is skipping Christmas shopping this year. She wants to put the money she makes toward an apartment for her, her boyfriend and their 2-month-old daughter.

“That’s going to be my Christmas present,” she said, adding that her boyfriend is also saving money he makes from street vending. “We just want the apartment so we can all be together.”