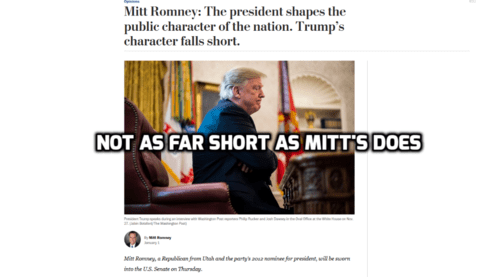 Patrick J. Buchanan: Trump & The Post—Whose Side Is Mitt On?

If there is a more anti-Trump organ in the American establishment than the Washington Post, it does not readily come to mind.

Hence, in choosing to send his op-ed attack on President Donald Trump to the Post, Mitt Romney was collaborating with an adversary of his party and his president.

And he knew it, and the Post rewarded his collusion.

"The president has not risen to the mantle of his office," said Romney; in "qualities of character" Trump's "shortfall has been most glaring."

Our leaders must "inspire and unite us," not "promote tribalism," wrote Romney. We must defend the "free press."

As senator, Romney promised, "I will speak out against significant statements or actions that are divisive, racist, sexist, anti-immigrant."

Sounds like a litany of media slanders against Trump, some of which, seven years ago, were lodged against a GOP presidential nominee whose name was Mitt Romney.

Thursday, the Post paid Romney in its special currency, with a Page 1 photo and headline about having discovered "a new voice of resistance."

But Romney had not exactly pledged his life, fortune and sacred honor to dethrone the tyrant. Rather he declared, "I look forward to working on these priorities ... with Mitch McConnell."

A day later, the New York Times, perhaps miffed it had not been the beneficiary of Romney's dump on Trump, dumped all over him:

"Romney Cools Fiery Tone After Trump Allies Assail Him," ran the headline. A CNN interview, wrote the Times, found Romney "repeatedly declining to escalate his attacks on the president and explaining that he would only speak out against Mr. Trump on issues of 'great significance.'"

Does Romney not see presidential character as an issue of "great significance"? The Washington Times said Romney appeared to be auditioning for the role of Jeff Flake in the new Senate.

Though the Romney screenplay seemed to fizzle after the early negative reviews, the episode is revelatory.

Clearly Romney senses Trump is in trouble, and may not survive, or may not run, and there may be an opening for him. He seems to want to be properly positioned with the anti-Trumpers and never-Trumpers, should that happen.

Yet, in seeing Trump as besieged, Romney is not wrong.

With loss of the House and resignation of his defense secretary, the president had a rough year's end. Now the expectations of his enemies and the hopes of this hostile city for his fall are greater than ever.

Blood is in the water. If Trump seeks re-election, he will be challenged in the primaries. And as presidents from Truman to LBJ, to Carter, Ford and Bush 41 discovered, these can prove problematic.

Looking over to the other side of the aisle, however, that party, too, has problems. The more hot-headed of the House majority have already said they will introduce articles of impeachment against the president.

And when the militant members are rewarded by major media with favorable coverage and commentary, this will induce others to join in, in anticipation of the same media rewards.

Speaker Nancy Pelosi and her Democratic leadership may see this rush to impeachment as a strategic blunder. But they will be unable to contain or control what will by spring resemble a mob.

Today, unelected media, not elected politicians, decide what gets attention. For our media, President Trump is the issue, as he was in 2016, 2017 and 2018, and removing him from the presidency the strategic goal.

But beyond the issue of Trump, 2019 looks to be a rough year for America. The deficit will reach a trillion dollars. National debt is near $22 trillion. The budget is out of balance. No consensus exists in Congress on how to deal with it.

If sanctions are not first lifted on North Korea, there will be no nuclear deal, and the probability grows that "Little Rocket Man" will begin anew to test his missiles and nuclear warheads.

With U.S. troops pulling out of Syria and Afghanistan, the day is coming, and soon, when we must face up to and act upon these facts:

America lost both wars. Afghanistan will fall to the Taliban from whom we took it in 2003, and Bashar Assad, Russia, Iran and Hezbollah are, for the near-term, dominant in Syria.

As for our Kurdish allies, they will have to turn to Assad and offer to give him the Syrian lands they captured from ISIS, in return for the Syrian regime's protection from the Turks.

And as for Russia and China, our great adversaries, our foreign policy elite succeeded in this century in undoing the best work of Nixon and Reagan.

Where those presidents split China from Russia and ensured that Beijing and Moscow would have better relations with us than with each other, our elite revels in that it has alienated both China and Russia—and united both against us.