Reconquista Reversed In Spain—Where Is El Cid When You Need Him?

Of all Europe, Spain should be the most nervous about Muslim immigration. Parts of Spain were ruled by Islam for centuries, and that's not the sort of detail Muslims overlook. They want it back, period.

Spain's bishops are alarmed by ambitious plans to recreate the city of Cordoba - once the heart of the ancient Islamic kingdom of al-Andalus - as a pilgrimage site for Muslims throughout Europe.

Plans include the construction of a half-size replica of Cordoba's eighth century great mosque, according to the head of Cordoba's Muslim Association. Funds for the project are being sought from the governments of the United Arab Emirates and Kuwait, and Muslim organisations in Morocco and Egypt. Other big mosques are reportedly planned for Medina Azahara near Cordoba, Seville and Granada.

The bishops of those cities are alarmed at the construction of ostentatious mosques, fearing that the church's waning influence may be further eclipsed by resurgent Islam financed from abroad. Up to one million Muslims are estimated to live in Spain. Many are drawn by a romantic nostalgia for the lost paradise of Al-Andalus, the caliphate that ruled Spain for more than five centuries.

The mosque houses within its arches a cathedral built to consolidate Catholic rule after Muslims were expelled from Spain in 1492. Muslims are forbidden to pray in the building. 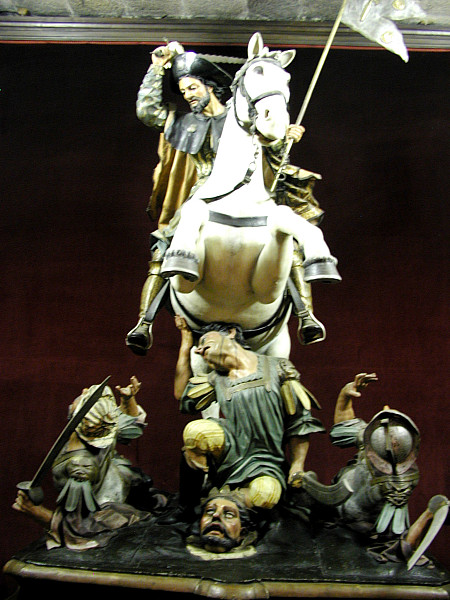 Many supporters of Western civilization breathed a sigh of relief when the Bishop of Cordoba rejected the idea that Muslims could pray in the local cathedral. Muslims have been jabbering their Cordoba demands for years, incidentally.

In October, Spanish villages agreed to tone down celebrations which featured exploding dummies representing Mohammad, so it's not like Spaniards haven't succumbed to Dhimmitude in the recent past.

Muslims also don't like the statues of Santiago Matamoros that show Spain's patron saint striking down Muslims with his sword. Not very multicultural.