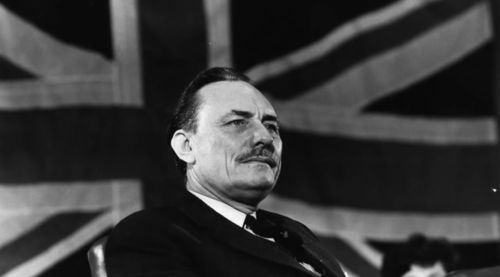 New York—On the only occasion I have met Enoch Powell, some 15 years ago, I innocently asked him if he had any plans to visit America again. This, perhaps fortunately, was at the end of our interview. His features, always expressive, contorted with disgust. He had, he said in effect, better things to do.

(The Bodley Head, £16). It can be traced back at least to Powell's wartime experience as a British Army intelligence officer in North Africa. He was appalled by the Americans' unthinking military profligacy and deeply suspicious of their simple-minded anti-colonialism. He had good reason in both cases.

But America, which Powell visited for the first time only in 1967, is not so much a country as a vast, chaotic cattle-drive. Almost any foreign critic can find enthusiastic supporters, and indeed precursors, here.

What is less obvious, especially, no doubt, to Powell himself, is the extent to which this most explicitly British of political figures was tacitly closer to the norms of American than British politics.

It can now be seen that Powell was on the winning side of one of those seismic shifts that periodically occur in the world of ideas. From the late 1940s, when he worked in the Conservative research department, he consistently favoured the allocation of resources through free markets rather than by government intervention. Specifically, he objected to deficit spending and political manipulation of the money supply to stimulate economic activity. In 1958 he joined the other Treasury ministers in resigning from Harold Macmillan's government on the issue.

This was a radical point of view even for professional economists, then under the spell of socialism in general and Keynes in particular. It was heresy to Tory professional politicians, some of whom (notably Sir Ian Gilmour) had elevated stealing the Whigs' clothing into a principle. When Powell equated Conservatism with capitalism, they squealed with fear, citing Toryism's pre-capitalist history even though Powell noted that Conservatism was not only capitalism. It has taken 1970s inflation and the socialist collapse of the 1980s to silence them.

In America, by contrast, this dispute simply did not exist. The conservative movement that eventually brought Ronald Reagan to power was always consciously committed to capitalism. And, like Powell, it always combined capitalism with unaffected nationalism.

Powell did anticipate American conservatives over immigration. But that was essentially because immigration began to disturb America's racial balance only after entry policy was loosened in the mid-1960s. Now, right on cue, there are signs that the issue is entering the explosive pre-Powell stage here.

Powell's politics have been American in practice as well as in principle. Unlike most politicians in the modern parliamentary system, he values the role of the independent legislator. He and Michael Foot showed what this meant in 1969 when they jointly derailed Harold Wilson's House of Lords reform bill, partly because it would increase front-bench patronage. In the US, senators and congressmen are necessarily independent legislators; it is illegal for them to accept office in the executive branch. But in Britain, the prospect of a menial post in the Ministry of Sewers usually buys subservience.

Similarly, in Britain there is little concept of disagreement with the party leadership. Only Winston Churchill, in 1940, ever won such an argument outright. The British political class is so focused on Downing Street that it could virtually ignore Powell's decisive impact in the 1970 and 1974 elections, the psephological proof of which was eventually provided by Dr Douglas Schoen—ironically an American and a liberal Democrat.

By contrast, Americans are always ready to rebel. The established leadership of one or other of their major parties was overthrown four times in the 16 years from 1964 to 1980. Two insurrectionaries, Jimmy Carter and Reagan, actually went on to win the presidency. The concomitant instability is no doubt alarming to foreigners, as it is to incumbents. But it is intrinsic to the extraordinary flexibility of US institutions.

In fascinating passages, Cosgrave shows that the raw materials of a full-scale American-type insurrection, men and money, were spontaneously assembling around Powell in the early 1970s. This happens during every American election campaign, in which each candidate must build his own grassroots organization. But Powell rejected the opportunity, apparently unwilling to contemplate such an unprecedented step.

These American parallels are not surprising. The political cultures of Britain and America are related as if by blood, in a way in which those of Britain and continental Europe are not.

But the British system retains more relict features. There are not yet any open primaries: the selection of candidates is still done by small, sometimes entrenched groups, the heirs of the squires who once settled things over port. The cult of the leader is reminiscent of a more hierarchical age. The tendency for patronage to matter more than policy is a characteristic of more primitive polities.

None of this helped Enoch Powell. But it is an interesting reflection that those transatlantic institutional differences that hampered him were also those which must be ascribed to Britain's inferior modernity and democracy.

The author is a senior editor of Forbes magazine in New York.