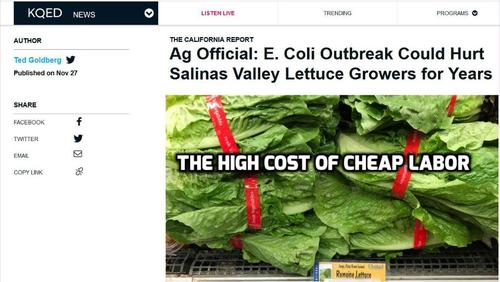 How Much Does Romaine Cost? Plenty, If You Live in California

Remember all the reports of fresh romaine lettuce contaminated with e coli? Preliminary reports said that the lettuce came from Central California and that is true.

The Salinas Valley in Monterey County dubs itself the "Salad Bowl of the World." According to the Monterey County Agricultural report, the crop of romaine was worth  $656 million or 15 percent of the total agricultural output last year. Monterey growers are worried that the bad press about contaminated lettuce will significantly impact their bottom lines. [Ag Official: E. Coli Outbreak Could Hurt Salinas Valley Lettuce Growers for Years, By Ted Goldberg, KQED, November 27, 2018]

At least some of the tainted romaine has been linked to Adams Brothers Family Farm in Santa Maria, California. Santa Maria is in northern Santa Barbara County. The farm has been around for years and has a good reputation. The bad romaine will definitely cause a huge loss for them.

Farmworkers, themselves pose risks. To put it delicately, many farmworkers are not literate in English, or well-practiced in food safety regulations or in good personal hygiene. And, why is that? They are Mexicans. If going to Mexico, be advised to drink bottled water.

One can drive by the fields along Highway 101 and look to see that the workers are Mexicans. I did so for many years when I lived in California. To zero in more closely,  Internet data can tell us exactly who their children are.  The information is all available at the California Department of Education website.

Santa Maria, where Adams Brothers Farm operates, has 17,122 students in the Santa Maria-Bonita School District, 16 elementary and 4 junior high schools. Only 2.9 percent of the children are white. Got that?  Well, what about the rest of Santa Barbara County? Isn't that where thousands of rich white people live? Hmm, Santa Barbara County's students are 23.5 percent white and the state as a whole has only 23.2 percent white students.

Santa Maria-Bonita School District has 17,000 students and 85 percent of them are "English Learners",  the euphemism for " they don't speak English." Most of the students are Spanish speakers, 8,785,  but 1,386 students speak Mixteco. They are from Oaxaca, Mexico and many Mixtec adults are illiterate.

And, there's more. . .of the 17,000 students in the Santa Maria-Bonita schools, 89 percent receive "free" lunches. If the children are U.S. born and poor, they are eligible for Temporary Assistance to Needy Families (welfare), Medicaid, Supplemental Nutrition Assistance (SNAP). These welfare programs are expensive but the most expensive part of "cheap labor" is educating their children.

In California, the average cost of education for one student is just over $10 000 per year. The primary funding sources are state income tax and property tax. So, if 85 percent of 17,000 students in Santa Maria do not speak English, we can assume they are immigrants. So, $10K times 14,000 plus students equals more than $140,000,000 and that's just for one school district in Santa Barbara County.

The Santa Maria Valley is chock-a-block full of farmworkers and their children, but California is full of immigrant children also. Of the 6.2 million students, 21 percent do not speak English. Many of the Hispanic and Asian children are second and third generation residents.

It is perfectly clear. The price of fresh lettuce, strawberries and broccoli is not low. In California, the taxpayers are subsidizing super market produce all over the country and in Canada too. Thank you, Californians.

As for the rest of Americans, be careful of fresh produce from California.