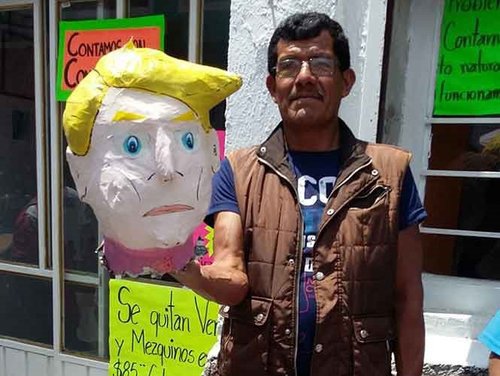 The Easter season just ended in Mexico. One of the local customs, usually on Sábado de Gloria (the day between Good Friday and Easter Sunday), is the Quema de Judas, the Burning of Judas. An effigy, with fireworks inside, is set on fire. It represents Judas Iscariot and it also represents an unpopular contemporary figure, usually a politician. Thus a traditional folk religious custom is combined with political expression. Excelsior reported from Central Mexico:

Residents of the popular barrio [proletarian neighborhood] of Arbolito, in Pachuca, completed the traditional burning of Judas, which on this occasion was personified by a cardboard mannequin in the form of the president of the United States, Donald Trump.

“We’re going to do the world a favor” declared the Trump effigy-burners. Reportedly they were in a good humor. Burning and blowing up stuff is fun, and their figure of hatred is attacked by the Mexican Main Stream Media 24/7, which makes it even better for them.

Organizer Cesar Alarcon blamed Trump “for all these conflicts” and for the “bad time” Mexicans’ relatives in the United States are having. (That’s a good sign!) Five effigies were reportedly burnt. After one was destroyed, only Trump’s head remained and one person suggested sticking on a pike “so they can see that you don’t mess with Mexicans.”

Pachuca was far from the only site where Trump was burned in effigy. 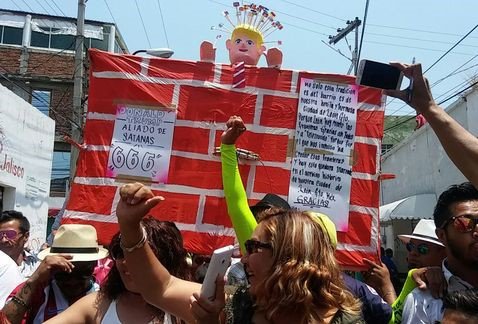 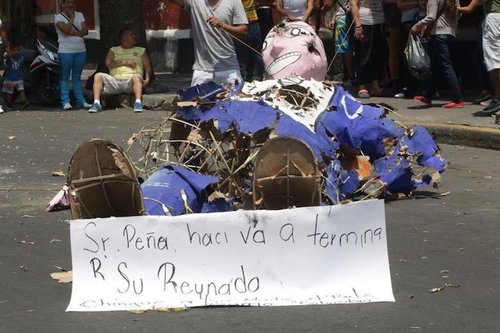 Mexican President Pena Nieto was a target in several of these “celebrations” ‘Quema de Judas’ en México cobra tinte político con Trump y Peña Nieto , [Mundo Hispánico, April 15, 2017]. And in Leon, the effigy was actually burned on Easter Sunday itself. The text referred to Trump as “the hated president of the Mexico’s neighbor country, Donald Trump.”

There were even effigies burned of Trump in other Latin American countries:

You would think Venezuela at least would have other priorities besides attacking Trump, what with the collapse of their entire system. But maybe attacking Trump is just the kind of distraction that beleaguered government needed.

Republican Representative In Mexico: “We Will Deport Fewer Than Obama” 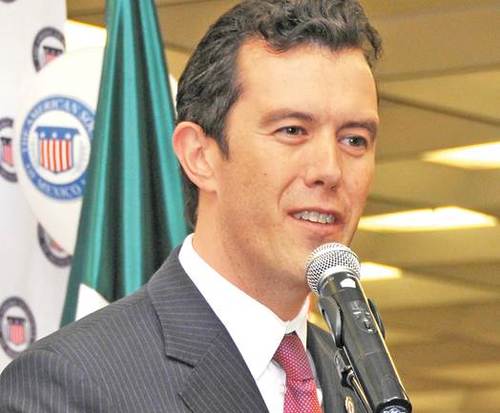 Who is this guy?  Larry Rubin is a dual citizen, with an American father and Mexican mother, born and educated in Mexico, President of the  American Society of Mexico and managing partner of Mexico-based search firm DHR International. He’s also head of the Mexico chapter of Republicans Overseas.

Rubin claims the solution to the “migratory problem between the U.S. and the world, particularly with Mexico, is a reform that gives legality to those who contribute to the American economy.”

Apparently, we have a “migratory problem” with the whole world—and the solution is Amnesty. It’s also needed “now more than ever,” according to Rubin, whom Excelsior incredibly identifies as “the President of the American Community in our country.” (That’s crazy. I was an American expatriate in Mexico for a decade and a half and never heard of a “President of the American Community”!)

“President” Rubin made the usual talking points about “migrants… contributing to the economy” and family separation and said Trump would deport “many fewer” than Obama. We hope that’s not true.

But this isn’t the first time we’ve heard of him. Right before the election, Mr. Republican Larry Rubin openly announced in Mexico that he did not support Donald Trump.

And yet Larry Rubin was still touted as a candidate for U.S. Ambassador to Mexico after the Trump Triumph. (Obama appointee Roberta S. Jacobson has not yet been replaced). 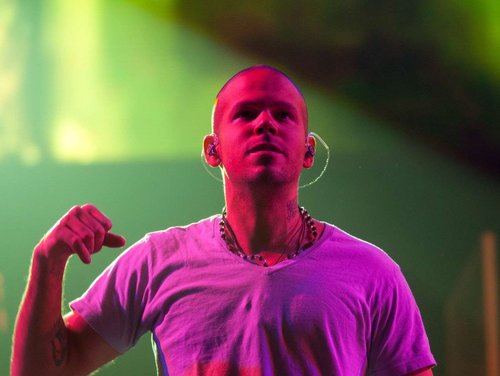 Time to pass on some wisdom from the “artistic community.”

Previously, “Residente” declared that Donald Trump is “an idiot,” those who voted for him are “racists,” and the U.S. is one of the world’s “most racist” countries [Residente: 'Trump es un idiota y sus votantes racistas', Excelsior, March 14, 2017

But twelve days later, “Residente” told his fans Donald Trump should not even be mentioned:

The Singer Rene Perez “Residente” recommended not to give more importance to the President Donald Trump, “we should talk about particular things, of laws, of protests but no more of him [Trump], he is a joke…”

But VDARE.com has common ground with him! “Residente” is a supporter of Puerto Rican independence. In his earlier Excelsior interview “Residente” said “it’s ridiculous that Puerto Rico “is still a colony.”

OK, Residente, this is something we can work together on. Your island can become independent and you won’t have to deal with those racist Americans anymore.

Sounds bad, doesn’t it? Right under that headline is a map of the United States showing the growth of “hate” being blamed on Trump. 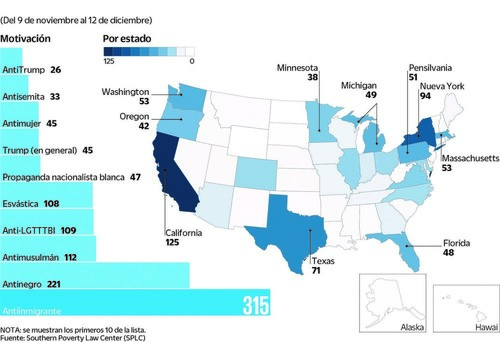 Take a guess as to their source.

According to the most recent report of the Southern Poverty Law Center (SPLC) organization, since the taking of power of the American magnate, 372 hate events have been registered, principally against members of the migrant community, although there are also significant amounts of attacks on Afro-Americans, diverse members of the gay diversity [an amusing way to put it], and Muslims and Jews.

Doesn’t it warm your heart to know that it’s not just the American Main Stream Media reprinting $PLC press releases, but the Mexican media as well?

Mexican Foreign Ministry Tells Us Who We Can’t Deport 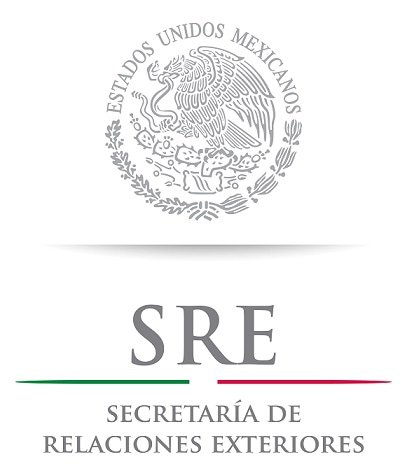 On April 20th, The Mexican Foreign Ministry (SRE by its initials in Spanish) declared that two Mexican illegal aliens, Maribel Trujillo and Juan Manuel Montes, should not have been deported from the U.S.

Why not? Well, said the SRE, their deportations “represent a violation of the express rules of deportation in that country [the U.S.], as neither of the fellow Mexicans represented a security risk….[and] …neither of them had criminal antecedents…” [Acusa la SRE a EU de violar normas de deportación con 2 mexicanos, Excelsior, March 20, 2017]

Forget the fake outrage about “Russian hacking.” Why does the Mexican government claim any say at all about who we can and cannot deport?