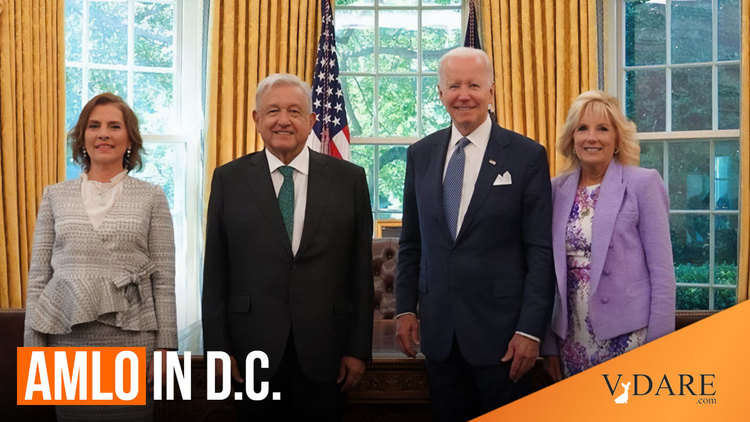 For years, I’ve been warning Americans about Mexico’s meddling in U.S. politics. Most people, including Republican elected officials, don’t give a hoot.

But U.S. Congressman Chip Roy, who represents Texas-21, has gotten a glimpse, and he might change all that. He does give a hoot, and said so on July 15 at a news conference:

Let me say something to President Obrador. If you wanna come have a skirmish with Texas you can meet us at San Jacinto, OK? We’re gonna secure the border of the United States and we’re gonna do it now.

“Let me say something to President Obrador. If you want to come have a skirmish with Texas, you can meet us in San Jacinto”. @FoxNews pic.twitter.com/rFfiBbYll8

For those who weren’t taught this in school, the Battle of San Jacinto, on April 25, 1836, ended Texas’ war for independence. Sam Houston’s Texans defeated Santa Anna’s Mexicans in 18 minutes.

On July 8, AMLO took a question about Texas Governor Greg Abbott’s attempts to control the border, specifically the announcement that he would begin returning illegal aliens to Mexico.

AMLO said Abbott didn’t have the legal right to do that because immigration is a federal responsibility:

In effect, he [Governor Abbott] is outside of his jurisdiction, it does not legally correspond to him to make this decision, it is something that has to do with the U.S. federal Government. Nevertheless, as there are elections in November, they seek sensationalism, they think that they are going to get sympathy from one party or another. …

[A]lthough we are respectful of the sovereignty of other countries, we do not approve of anti-immigrant campaigns to get elected. We consider that immoral.

There followed an AMLO rant about Abbott’s “anti-immigrant policy,” which “is an aberration and we are not in agreement with that.”

But then he threatened to interfere in November’s gubernatorial election in which Abbott faces Beto O'Rourke.

And I have said it and now I am going to repeat it again: if there is a candidate or a party which mistreats the migrants and mistreats Mexicans, we are going to ask our fellow Mexicans to help us over there, that they do not vote for those parties or for those candidates.

Note that AMLO jabbered about “our fellow Mexicans” who vote in the United States. If they vote, they are, presumably, U.S. citizens. But he considers them Mexicans, and says they should vote the way he wants.

And, indeed, in the 1990s, Mexican law was changed to allow dual citizenship, specifically to enable meddling in U.S. politics.

So yes, Rep. Roy, we do have a problem. And it’s bigger than one Texas gubernatorial election.

“Many of those who live in Texas have Mexican origins, many, because Texas belonged to Mexico,” AMLO continued.

In fact, Texas was only part of independent Mexico for 15 years (1821-1836), and no large Spanish-speaking population lived there at the time. The vast majority of Mexican-Americans in Texas today descend from recent immigrants.

As for the midterm elections in general, AMLO threatened more meddling:

It’s important to be watching who is going to be the candidate, who supports him, to be watching, because they are going to start a campaign with that [border control]. And we already said that we are not going to permit mistreatment of migrants and Mexicans.

While AMLO didn’t endorse O’Rourke or any other Treason Lobby candidate by name, he didn’t need to.

In general, he’s telling Mexican-Americans to vote against immigration patriots. And that’s bigger than one election. He’s asserting sovereignty over U.S. citizens of Mexican ancestry as a general principle. That is, he’s asserting Mexico’s right to meddle in American elections.

Roy or somebody in his staff should contact me [email him/Tweet him]. I have all the information he needs about Mexican meddling.

AMLO And Biden Get Together. It Looks Like They’re On The Same Page

Just a few days later, July 11-13, AMLO was here. On July 12 he met with Traitor Joe Biden in a joint news conference. Each president spoke in his own language.

This, you understand, is in addition to all the other illegals Biden is waving in across the southern border.

AMLO had five suggestions for Biden, his fifth being on immigration policy:

Make the migratory flow orderly and permit the arrival to the United States of workers, technicians and professionals of various professions, Mexicans and Central Americans with temporary work visas to make sure that the [U.S.] economy isn't paralyzed for lack of a workforce...

It is indispensable to regularize and give certainty to the migrants who have worked honorably for various years and have contributed to the development of this great nation. [Versión estenográfica.  Encuentro bilateral México-United States ("Stenographic Version. Bilateral Mexico-U.S. Encounter.") Mexican Presidential Website.  July 12, 2022. ]

That, of course, means Amnesty for illegal aliens. But AMLO continued by denouncing immigration patriots who oppose The Great Replacement:

In the face of this crisis, the way out is not through conservatism. The way out is through transformation. We have to be bold in our actions. Transform. not maintain the status quo.

On our part, we’re acting in good faith, with all transparency, because there shouldn’t be selfishness between countries, peoples that are neighbors and friends. On the other hand, integration does not signify hegemony or subjugation.

The guy has chutzpah, that’s for sure. But AMLO’s agenda fits right in with Biden’s.

On July 11, the day before the AMLO-Biden Summit, First Lady Dr. Jill Biden compared the diversity of San Antonio’s Hispanics to the “diversity” of the city’s breakfast tacos. Professional Hispanics were not amused. Conservatives laughed.

Raul [Yzaguirre, president of the group] helped build this organization with the understanding that the diversity of this community, as distinct as the bodegas of the Bronx, as beautiful as the blossoms of Miami and as unique as the breakfast tacos here in San Antonio, is your strength.

I think the criticism is all wrong.

Dr. Jill mispronounced bodega, which is what they call convenience stores in New York City.

My question: Why is it the duty of American officials to speak Spanish correctly, or to speak it at all? (And I’m a Spanish-language teacher!)

Second, Dr. Jill did not call Hispanics “tacos.” She employed a simile to describe the “diversity” of the city’s Hispanic population; they are, she said, “as unique as the breakfast tacos here in San Antonio.” Do people not understand simple rhetorical devices anymore?

The real problem, though, was neither Dr. Jill’s mispronunciation of foreign words nor her misusing poetic license in a racially insensitive way.

The real problem is that the wife of the president was Hispandering to a subversive organization, and it backfired.

There's an important lesson there.