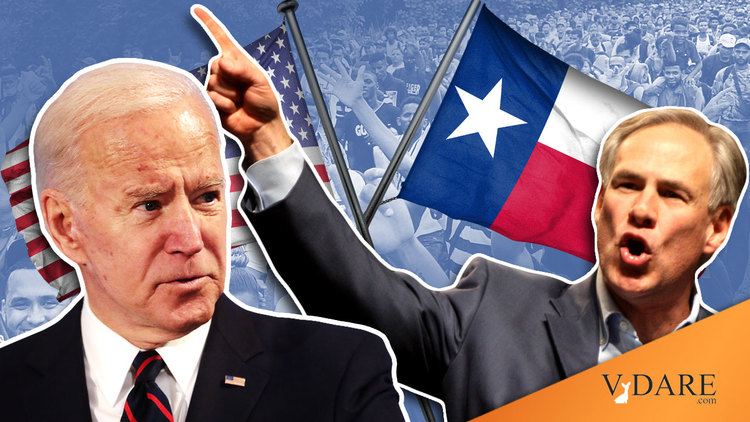 Constitutional Crisis Upcoming: Texas's Abbott Is Sending Illegals Back To Mexico—Will Biden Back The Invasion With U.S. Federal Troops?

Governor Greg Abbott is a good governor, not a great governor. He seems to have to be forced to take action on issues that are easy wins: his hesitancy on stopping abuse of children with trannyism, years of border anarchy with only photo ops, and the failure to stop tuition for illegal aliens are just a few. No doubt many Texans will cite other issues as well. So it is a big surprise that Governor Abbott may bring about a Constitutional crisis, by confronting the illegal Biden Regime Administrative Amnesty at the border. Good for him, I just hope he has the follow-through.

Years ago Governor Rick Perry was the first to take real action against illegal immigration—he who signed the bill authorizing in-state tuition for illegal aliens. I even had a confrontation with National Review’s Kevin Williamson over the illegal alien issue. I had backup, not that Williamson was any threat.  (He was hired, then fired by The Atlantic over abortion after years of virtue signaling against Donald John Trump, only to be see President Trump vindicated and successful on the abortion issue that  Williamson secretly supports.) President Trump certainly had the last laugh on this issue.

But back to the upcoming Constitutional crisis. Governor Perry deployed Texas State Troopers and Game Wardens to the Rio Grande on fast boats bristling with machine guns to stop illegal immigration; years later Governor Abbott followed up with a similar deployment, along with Texas Rangers and Troopers holding the line where possible on the banks.

Sadly, Kirstjen Nielsen sabotaged any deployment of U.S. Coast Guard, U.S. Army, and U.S. Navy riverine forces to stop the zerg rush of illegal aliens when she had the opportunity, then decried the mess she created at the border. This has led to the question of whether a State can deport an illegal alien. After all, Arizona V. U.S. pretty much said immigration was an exclusively Federal issue.

I was at first skeptical, because the statutes on deportation refer only to action by immigration officers as defined in Federal statute and regulation. While section 287(g) authorizes State officers to act, they do so as trained, supervised, and deputized immigration officers. Looking at the issue, and the Constitutional requirement that the President act to prevent invasion and the authority of the States to repel an invasion, my thinking has changed, or, more accurately, expanded.

States do have certain inherent authority to act not only as immigration officers, as they did during Operation Wetback under cooperation with and at the direction of the Border Patrol, but have the authority to repel an invasion of illegal aliens. That is, the State of Texas may hunt down and arrest, or even kill if their authority is resisted, any alien acting as an invader, as Pancho Villa did.

But with the border washed away by the Biden Regime Administrative Amnesty, Governor Abbott has laid down the gauntlet. He has ordered Texas Rangers, Texas State Troopers, Texas State Militia, and the Texas National Guard to hunt down illegal aliens in the border area.

The Republican governor of Texas directed state military and police forces to arrest and transport back to the southern border any person suspected of illegally entering the United States from Mexico.

Gov. Greg Abbott, who is seeking a third term in November, authorized Texas National Guard soldiers and Texas Department of Public Safety officers on Thursday afternoon to take custody of illegal immigrants encountered between the ports of entry and “return those illegal immigrants to the border at a port of entry,” his new executive order states. The order suggests that Texas authorities will not enter Mexico.

Abbott said he chose to act suddenly after 5,000 noncitizens [Note: Illegal aliens. “Noncitizens” has no legal meaning.] were apprehended illegally crossing into Texas from Mexico over the holiday weekend.

“While President Biden refuses to do his job and enforce the immigration laws enacted by Congress, the State of Texas is once again stepping up and taking unprecedented action to protect Americans and secure our southern border,” Abbott said in a statement.

The move comes two days after leaders of six Texas counties and one city declared an invasion under the U.S. Constitution. The same officials have pushed Abbott and Attorney General Ken Paxton to declare an invasion at the state level but have not seen such action to date.

As an aside, this is a good article, but Giaritelli uses the term “noncitizens” to describe illegal aliens. It is important that she know that “noncitizen” has no legal definition. It also does not exclude American nationals, persons born or naturalized in American Samoa and the Swains Islands who are not citizens of the United States, but only nationals of the United States. Contact her here. She should use alien, illegal alien, or foreign national instead, and more accurately.

But back to the coming confrontation. This action by Governor Abbott will result in a Constitutional Crisis, and perhaps armed conflict between the Federal Bureau of Investigation (FBI) and Texas Guardsmen, Militia, Troopers, and Rangers. It is very likely that the Tyrant Biden will order arrests of Governor Abbott and any Texas official who takes any action against illegal aliens. I also see a Federal judge ordering an end to this policy, Abbott refusing, and the U.S. Marshals Service (USMS) ordered to make arrests. Likely the FBI and the Federal Department of Justice (DOJ) Civil Rights Division (CRD) will take independent action to arrest Governor Abbott and other Texas officials for civil rights violations on behalf of illegal aliens.

This will put the FBI and USMS in a bind, as they work closely with Texas law enforcement on many other issues, especially drug cases at the border, and most Deputy U.S. Marshals are likely staunch Republicans. They may slow walk any orders from a Federal kritarch or from D.C. The FBI agents are another story. Those agents living in Texas know if they act, their neighbors will be enraged. They will have to look over their shoulders and be very careful.

Usually local cops don’t give traffic tickets to those in Federal law enforcement—there is a brotherhood-of-the-badge and professional courtesy on this issue—but their auto insurance will skyrocket with all the tickets they receive after any action that supports illegal aliens. In any event, they will no longer enjoy living in Texas, but most FBI agents in Texas don’t want to transfer to California or New York, so even the local FBI may ignore D.C., but likely agents will be sent from other FBI offices to arrest Texas officials, and that will cause more conflict locally.

Forget the Border Patrol, they will not help in any way. And ICE SVU will likely try not to get involved, after all they are lazy and risk averse: not getting involved will be their enforcement philosophy. They also have to live there, so likely ICE SVU will ignore any orders from DC to get involved.

But that leaves us with the predominately Republican Federal District Court judges. There is a good chance that many judges will quash any arrest warrants or dismiss charges after arrest. That would be a slap at D.C., so Merrick Garland and Alexandro Mayorkas will have to tread lightly. I also doubt if any warrant or arrest gets past the 5th Circuit Court Of Appeals. They are solid against Biden and his amnesty.

There is also a very good chance of violence, as while there are lots of FBI agents, there are more Texas Guardsmen, Troopers, Rangers, and Militia, much less armed Texians with an independent attitude reaching back to the Alamo. There would be a good chance any Federal judge that issues an arrest warrant might be targeted by real violence, as would any FBI agents executing those warrants. And remember, arresting agents can’t take any of those arrested out of Texas. Other judges would quickly get the message. And we now have the precedent that attacks on judges are not that important. Merrick Garland has been silent on assassination attempts against Supreme Court Justices, so any rhetoric about the sanctity of judges’ lives will ring hollow.

Is the spirit of Sam Houston alive in Texas? We may find out, it may come to blood. While Biden is blundering his way into possible war, conventional and nuclear with Russia, he is more enthusiastically heading to a civil war. He may get that chance to test F-15s versus Texas.