Memo From Middle America: National Council Of La Raza (The Race) Changes Its Name. But Not Its Mission—Abolishing The US Border! 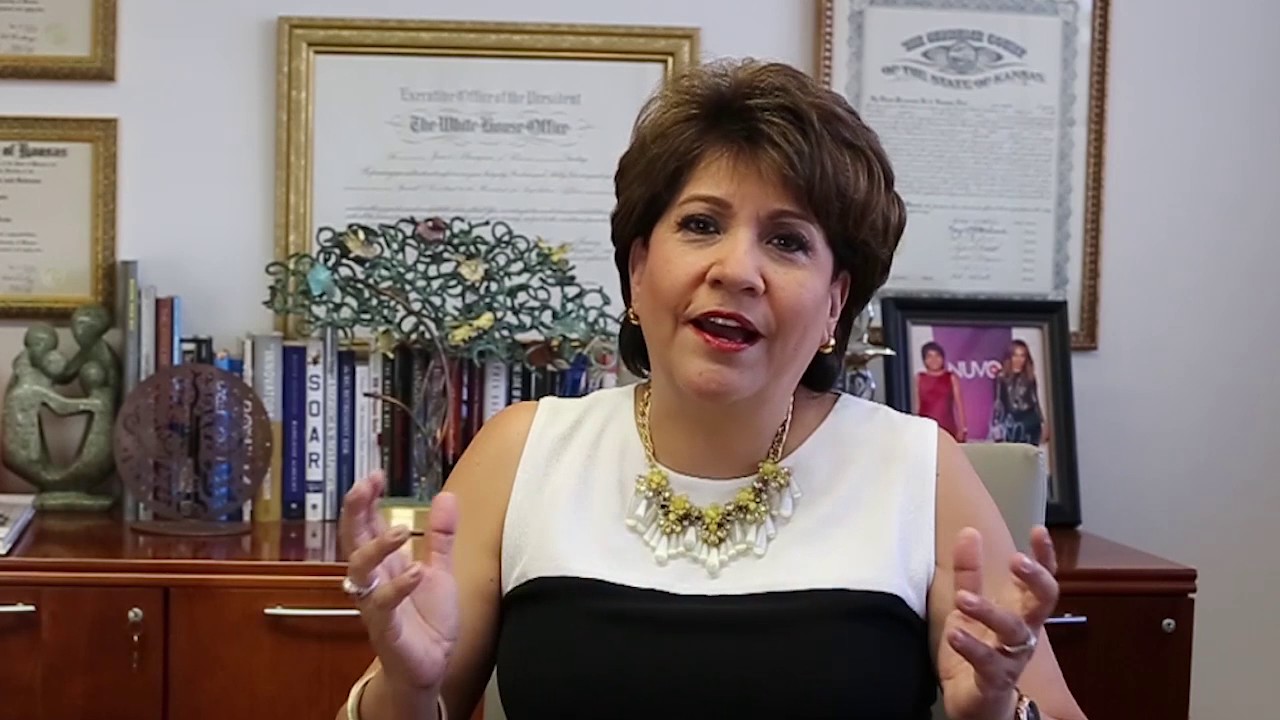 President Janet Murguia justified the change because some members thought “raza” was outdated and “didn’t resonate”.  [Largest Latino Rights Group To Drop ‘La Raza’, Switch To ‘UnidosUS’, CBS, July 10, 2017]  She claims it had nothing to do with “right wing groups” who nefariously “applied a literal translation to ‘la raza’ as ‘the race’ and said the advocacy group for Latinos was pushing a racist agenda”. [National Council of La Raza Changes Name to UnidosUS, by Suzanne Gamboa, NBC News, July 10, 2017]

The organization long denied its name meant “the race” and instead claimed it meant “the people” or "the community." Naturally, the Main Stream Media parroted this line. 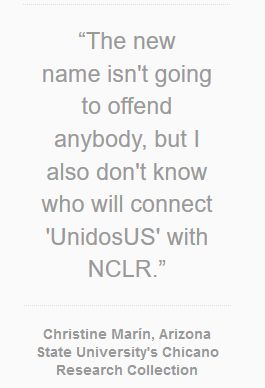 I consulted the Real Academia Española, the “Royal Academy of the Spanish Language.” Founded in 1713 in Madrid, it’s the highest authority of the Spanish language, boasting leading scholars from throughout the Spanish-speaking world.

The first meaning it assigns to “la raza” is Casta o calidad del origen o linaje, which means “caste or quality of the origin or lineage.”

The second is “Cada uno de los grupos en que se subdividen algunas especies biológicas y cuyos caracteres diferenciales se perpetúan por herencia.” “Each one of the groups in which some biological species are subdivided and whose differential characteristics are perpetuated by inheritance.”

In reference to animals, the term raza refers to a breed, such as a Berkshire pig or Guernsey cow. An animal breed is not a “people” or “community”.

The Real Academia also provides in its entry an English translation of raza. That translation is “race.”

I can’t find any equivalent of the terms “people” or “community.”

Could Razistas be pulling our leg about “la raza”? The NCLR/UnidosUS website provides its own explanation of what La Raza supposedly means. Interestingly, it’s harder to find than it was years ago. Are they hiding it?

The term was coined by Mexican scholar José Vasconcelos [Right] to reflect the fact that the people of Latin America are a mixture of many of the world’s races, cultures, and religions. Some people have mistranslated “La Raza” to mean “the race,” implying that it is a term meant to exclude others. In fact, the full term coined by Vasconcelos, “La Raza Cósmica,” meaning the “cosmic people,” was developed to reflect not purity but the mixture inherent in the Hispanic people. This is an inclusive concept, meaning that Hispanics share with all other peoples of the world a common heritage and destiny.

Aside from claims the Real Academia mistranslated the word, note their concept of La Raza was developed by Jose Vasconcelos. The explanation makes it sound like Vasconcelos was celebrating “the mixture inherent in the Hispanic people,” “an inclusive concept.”

Vasconcelos describes his ideology in La Raza Cósmica (The Cosmic Race). Written in the 1920s and revised in 1948, it was widely influential in Mexico and throughout Latin America.

Vasconcelos called the defeat of the Spanish Armada in 1588 a “disaster.” Note that the Armada's defeat paved the way for English settlement of the 13 Colonies (beginning with Jamestown) which was the foundation of the U.S.A.

This civilizational struggle “of Latinity against Saxonism,” said Vasconcelos, was and is “a struggle of institutions, of purposes and of ideals”.

Vasconcelos calls the Anglo-Saxons “our enemies” and writes of “the Saxon—our rival for possession of the continent”. (Recall that in Spanish, North and South America form one continent.)

What does that mean for the U.S.A., founded as it is upon the English cultural, linguistic, legal and political principles?

Are Hispanic immigrants going to assimilate to our culture or do they see themselves as Hispanic infiltrators of the enemy Anglosphere?

Culturally speaking, the La Raza ideology is opposed to our culture.

What did Vasconcelos teach about race?

Vasconcelos divided humanity into five races (razas)—(1) the negro (black) (2) the rojo or indio (American Indian), (3) the amarillo (yellow) or mogul (Mongol), and (4) the blanco (white).

This new race, taught Vasconcelos, is being formed in Latin America through the race mixture of the four traditional races. And this new race is going to be “an improvement [superación] over all the past [races].”

That sounds like a “super-race” ideology. Where have I heard that before?

Vasconcelos’ new Cosmic Race, an “infinitely superior type to all that have existed” would be formed by the four traditional races, but not in equal proportions.

Vasconcelos said the white (European) character would probably predominate and “the white himself will have to aspire with the object of conquering the synthesis.” The new Fifth Race would be predominantly European.

Vasconcelos didn’t write much about Asians, though there has been some Asian mixture in Latin America.

As for American Indians, Vasconcelos thought they needed to modernize. Through race mixture, “The Indian…will make the jump of myriad years…”

Vasconcelos also taught blacks would have some characteristics bred out.

“The low types of the species will be absorbed by the superior type…. the Negro, for example, can be redeemed and, little by little, through voluntary extinction, the ugliest stocks will be less prolific, and the better specimens will yield to the more beautiful.”

Vasconcelos even contrasted the situations of American blacks and Latin American blacks, writing that “In the Iberoamerican world…we have few Negroes and most of them have been transforming into mulattoes.”

Vasconcelos postulated, “..in a few decades of aesthetic eugenics the Negro can disappear together with the types which the free instinct of beauty will designate as fundamentally recessive and unworthy…of perpetuation.”

Janet Murguia didn’t tell us about that part!

The apologists of La Raza ideology (knowingly or unknowingly) presented a sanitized version. But they neglect entirely to tell you that in 1940, while World War II was already raging in Europe, Jose Vasconcelos was a Nazi sympathizer.

Actually, a collaborator. Vasconcelos edited Timón, a magazine sponsored by the German embassy in Mexico. Some of the publication’s articles cheered on the Axis powers, attacked Jews and quoted the Protocols of the Elders of Zion.

Janet Murguia doesn’t bring that up either!

Is it possible the real reason behind the NCLR’s name change was that unfortunate publicity about the term raza created the possibility Americans might learn about Vasconcelos’ “Cosmic Race” ideology?

Maybe. But there are still plenty of other groups bearing the term La Raza in their organizational names. In fact, according to Lisa Navarrete of the NCLR, there are “thousands”.  [Which ‘La Raza?’ Trump comments cause confusion over group’s role, by Emily Flitter, Reuters, June 6, 2016]

One notable example is La Raza Lawyers of San Diego, which has U.S. District Judge Gonzalo Curiel as a member. Candidate Trump was criticized for calling him a “Mexican judge.”

La Raza ideology has no place in Anglo-American jurisprudence. It’s disturbing such an organization even exists.

And despite the name change, NCLR/UnidosUS still exists and there’s no change in its policies. The organization claims : “Our primary change is that of our name—UnidosUS. Our Mission, Vision, and Values will remain the same. But we recognize that as an organization we need to ensure we evolve along with, and remain relevant to, our ever-changing Hispanic community.”

To give you some idea of its “values” when it comes to immigration, here are some press statements and issue statements from the NCLR/UnidosUS website.

Regardless of its name, UnidosUS is not your friend if you’re an immigration patriot. It will continue to oppose any attempt to enforce immigration laws. Indeed, “UnidosUS” is already denouncing President Trump’s “immoral border wall” [UnidosUS Decries House Decision to Stick Taxpayers with $1.6 Billion Bill to Fund Immoral Border Wall, July 28, 2017].

It may have a new name. But UnidosUS has the same old mission.