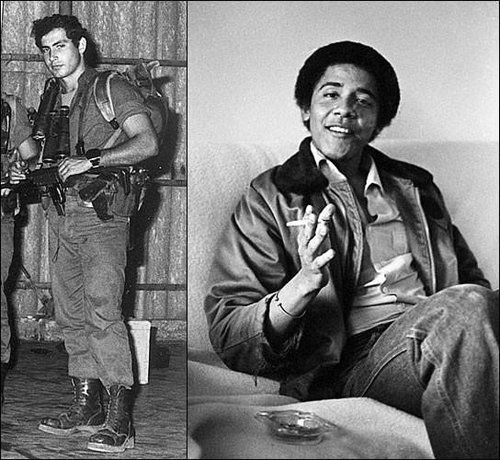 Young Netanyahu And Young Obama: The image making the rounds of the American Right

It was politics as parody. With almost as much pomp and posturing as the State of the Union, Israeli Prime Minister Benjamin Netanyahu addressed a Joint Session of Congress and delivered a speech that would have been called stridently nationalist if uttered by any European. The Republican leadership showed their willingness to openly insult the President of the United States by hosting a foreign head of state and giving him a reception as rapturous as anything ever enjoyed by Ronald Reagan or George W. Bush.

And then, just after the speech was over, the House Republicans promptly collapsed and handed Barack Obama the greatest policy victory of his second term by surrendering on his unilateral Executive Amnesty.

Seventy five Republicans joined the entirety of the Democratic Party to vote for a “clean” i.e. castrated Department of Homeland Security funding bill that fully funds Obama’s Executive Amnesty. For all intents and purposes, immigration law is now essentially suspended in the United States—with the complaisance of Congress [Here Are the 75 House Republicans Who Conceded the Immigration Fight, by Pete Kasperowicz, The Blaze, March 3, 2015]

What makes this surrender so startling: it is the culmination of months of militant rhetoric during which the Republican Party swore defiance. As even House Majority Leader Kevin McCarthy noted, Senate Majority Leader Mitch McConnell could have easily used the so-called “nuclear option” of suspending filibusters and using a pure majority vote to pass a bill that would have fully funded DHS except for Obama’s immigration orders. If prior votes were any indication, some Senate Democrats would have joined the Republicans.

As Speaker John Boehner paradoxically made clear with his uncharacteristically powerful speech in January, the President simply does not have the legal authority to suspend immigration enforcement. Thus, the current debate is not really about immigration but about the authority of the Executive Branch and the constitutional separation of powers. In short, it is precisely the kind of fight over “limited government” that the Beltway Right can comfortably engage in.

And yet even with a Republican majority in both the House and Senate, we are now told that the first branch of government is utterly powerless to stop a lawless President and that we must rely on the courts to save us.

Even on this most favorable of battlegrounds, the Republican Party not only managed to lose but managed to lose after first vowing to fight—thus showing both incompetence and stupidity, as well as cowardice.

Needless to say, there is still the unmentionable option for the GOP. As VDARE.com Editor Peter Brimelow noted last summer in his call for impeachment, the objective is not to remove Obama, but to get him to reverse his actions and thus the cause of his indictment. Impeachment is a perfectly legitimate and constitutionally proscribed course of action specifically designed to reverse executive overreach. And unlike the battle over DHS funding, any impeachment trial can be carefully limited to the specific issue at hand, namely, the actions that President Obama himself repeatedly admitted were illegal.

Yet the checks and balances of our Constitutional order don’t work if one entire branch of government simply punts its responsibilities. As with all political questions, this is less a question of legality than a contest of will. The GOP leadership doesn’t have it.

And that’s why the visit of Prime Minister Netanyahu today was so bizarre.

One of the great accomplishments of the Israeli Prime Minister has been to simply halt what the Israelis call illegal infiltration, despite the usual wailing of the rent-seekers who call themselves “human rights groups.” These efforts included the construction of a wall along the border with Egypt, increased efforts to “detain, deter, and deport” illegals, and blocking remittances.

Most impressively, Prime Minister Netanyahu and his Cabinet confronted the Israeli business community in 2010 and told them that the national interest of Israel would come before their profits. In Netanyahu's words:

You will not like this, but we plan to legislate strict laws and enforce them with a firm hand against the illegal employment of infiltrators and foreign workers… We are flooded with surge of refugees who threaten to wash away our achievements and damage our existence…

Anyone walking around Arad, Eilat, or even south Tel Aviv today, can see this wave, and the change it is creating, with their own eyes. They are causing socio-economic and cultural damage and threaten to take us back down to the level of the Third World. They take the jobs of the weakest Israelis.[ PM: Infiltrators pull us towards Third World by Tani Goldstein Ynetnews.com, January 21, 2010]

The example of Israel shows that immigration can be stopped, and quite easily too. (Of course, the Israeli effort also received an assist from useful idiot nations like Sweden who were willing to accept the Jewish state’s unwanted Africans).

Of course, there’s the elephant in the room: many Jewish organizations and individuals support nationalism for Israelis and, simultaneously, multiculturalism for Americans. A perfect example: Sheldon Adelson, who has essentially bought the Republican Party and committed it to a path of Open Borders even while championing a border fence for Israel.

Yet an increasing amount of anti-Israel sentiment comes from leftists (including Jews like Max Blumenthal or Tim Wise) who either favor a more consistent form of egalitarianism or do not see Jews as part of the great Coalition of the Oppressed, which consist of the various shades of black and brown.

If Israel dies, it will not be because of the “Neo-Nazis” of the Main Stream Media’s imagination or even because of Arab military power. It will be because the European world or even international Jewish groups will demand Israel swallow the same egalitarian poison that is choking the life out of Western Civilization.

The Jewish State will fall under the weight of sheer demographics the moment it places democracy ahead of identity.

American nonwhites, who are far less supportive of Israel than European-Americans, are a growing part of the anti-Israel coalition [Americans still support Israel, but views vary by age and race, poll finds, by Gram Slattery, Christian Science Monitor, July 29, 2014]. Among the thirty-four Democrats who boycotted Netanyahu’s address were figures like Luis Gutierrez, Raul Grijala, and several members of the Congressional Black Caucus [Elizabeth Warren, Al Franken Join Growing List of Democrats Skipping Netanyahu Speech, by Mollie Reilly, Huffington Post, March 3, 2015]. Though whites like Elizabeth Warren also boycotted, a racially informed perception that Boehner had “disrespected” President Obama was one of the most important rationales behind the progressive boycott. Even Louis Farrakhan got in on the act, claiming Netanyahu’s visit was a racial attack on blacks.

Many American conservatives like to claim that criticism of Israel is driven by “anti-Semitism.” But the truth is that anti-Israel sentiment on the Left is mostly driven by anti-nationalism. The common comparison of Israel to South Africa is true—because, like the Afrikaners amidst the black Africans, mostly European and Russian Jews are trying to maintain a First World enclave in the midst of a larger Third World population.

And this is part of the secret of American conservative support for Israel. The caricature of American Jews is that of a nerdish, urban student radical who votes for Socialism and looks like Woody Allen. But that kind of image better fits Barack Obama than Benjamin Netanyahu.

The Israeli Prime Minister is a former soldier who saw combat, was wounded, and comes from a family of warriors that produced one of the greatest heroes in the storied history of the IDF.

One of the most circulated opinions on social media was the wish that Netanyahu could be our President. It’s hard not to see this as Americans’ sublimated desire for any kind of nationalism that can plausibly be termed “Western.” To a lesser extent, this is also what informs the relatively favorable treatment Russian President Vladimir Putin receives among some groups on the American Right. The difference is that because of the lingering double standard about Jewish nationalism and European nationalism, American conservatives can still, to some extent, support Israeli nationalism and even militarism without being called racist.

Of course, we’ve been saying “Netanyahu for President” for years at VDARE.com. But we see it for a different reason. What is needed is not for Americans to admire Israelis, but to act like Israelis. Like Israel, the real America is a nation-state, the political expression of a particular people. And just like Israel ceases to be Israel if it becomes non-Jewish, America ceases to be America if it loses its European majority and WASP core culture.

The Republicans’ showy admiration for Israel, combined with their simultaneous shameful surrender on immigration, reveals them as the political equivalent of cuckolds. They openly acknowledge what patriotism and leadership looks like. They simply choose not to do it.

All too many American Jewish organizations can be called hypocritical. But they are still better than America’s Conservatism Inc., who can only be called cowards.