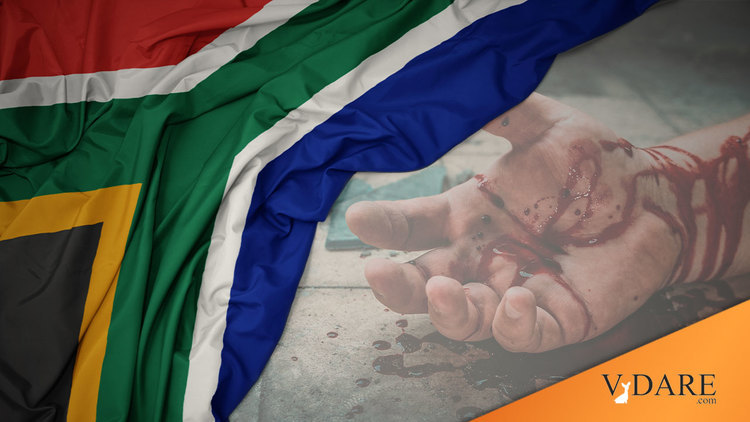 An Afrikaner Reader Points Out That Some Refugees Are Genuine

Re: A Canadian Reader Warns Against Romanticizing Immigration

From: An Afrikaner Reader (With Relatives In The New South Africa)

I'm a white South African from that tribe known as the Afrikaner or Boer, living in voluntary exile. I would like to object to James Schipper's letter stating that all immigrants are economic immigrants. Many white South Africans (1 million out of originally 5.5 million = 18%) left South Africa due to excessive violence and affirmative action. We are literally being forced out of the country, and the African National Congress governing party has publicly declared that whites are no longer welcome there. Many others would also like to leave but are trapped with a useless passport and perhaps too little education or money. Some have decided to try and stick it out in the vain hope that the tide may turn. Western countries love to invite non-white immigrants but generally refuse to take the South African whites, who are leftovers of their colonial past.

It's obvious that apartheid wasn't a viable long-term solution, but installing a former terrorist organization and expecting diligent governance was really naïve. Especially when the US State Department knew that Zimbabwe, that former role model, was already on its way down. There were many other viable political solutions which would have guaranteed a relatively safe existence for the white minority without infringement of black rights, but all of these were systematically brushed off the table by the "international community" (US State Dept, EU, UN, NGO's, corporate businesses, and of course the black caucus in the US). It had to be the ANC.

The result is that a very sizable section of the productive population of South Africa has voluntarily emigrated even though they loved South Africa. And it's mostly not because they abhor black faces, since the real level of interaction between blacks and whites in South Africa was always higher than that of the US, due to the demographics of that country. The lack of a political future, violent crime, disintegration of the infrastructure and services, cultural discrimination and workplace discrimination are taking their toll.

But somehow no serious western journalist has pondered this situation. The usual read is about the horrors of apartheid or more fawning over Mandela.

So there are possibly 1 million involuntary immigrants to subtract from the number described in Mr. Schipper's letter.

Otherwise, congratulations on vdare.com, one of the few internet sites I enjoy visiting.

[VDARE.COM NOTE: Oddly enough, when George Washington wrote "I had always hoped that this land might become a safe and agreeable asylum to the virtuous and persecuted part of mankind, to whatever nation they might belong", he was talking about Dutchmen—ancestors of the Afrikaners. But try telling Jack Kemp that.]