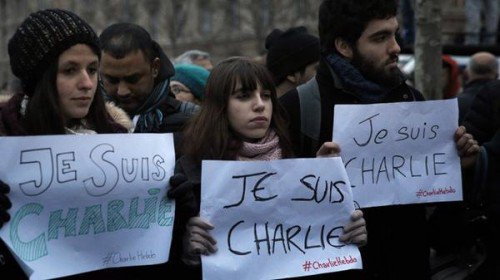 The Lesson Of CHARLIE HEBDO: France, and the West, Must Chose Identity or Extinction

Protesters hold signs saying "Je Suis Charlie"—French for "I Am Charlie"—in solidarity with the victims. But the whole of France is Charlie Hebdo, and solidarity against immigration is illegal in France.

The Islamic terrorist attack on the French satirical magazine Charlie Hebdo is as devastating as it was predictable. Twelve people are dead at the hands of “French” Muslims (Police hunt three Frenchmen after 12 killed in Paris attack, By John Irish and Antony Paone, euronews,com January 8, 2015) But while the politicians posture and the Main Stream Media tries to shift the blame away from Islam, a larger struggle is taking root. Europeans are not going to be allowed to ignore the National Question. They are going to have to choose whether to embrace their Identity and confront Islam or submit. Opting out is no longer an option.

Charlie Hebdo is best known internationally as a provocative journal that occasionally published cartoons of the Prophet Muhammad. Only a short time before the attack Charlie Hebdo tweeted out a joke about the Islamic State with “Caliph” al-Baghdadi wishing everyone a Happy New Year.

However, the publication is hardly conservative and directed just as much fire at Judaism and Christianity. Just last month, the magazine published a vulgar image portraying the birth of Christ that could serve as an entry in its own right in VDARE.com’s War on Christmas Competition [What is Charlie Hebdo? The cartoons that Made the French Paper Infamous, by Max Read, Gawker, January 7, 2015]. The cartoon still serves as the magazine’s avatar on Twitter.

Several of the cartoonists who were killed were reportedly called out by name as the gunmen entered the magazine’s offices. One of the names was Editor Stephane Charbonnier, who was “reportedly a supporter of the French Communist Party and his cartoons often featured Maurice et Patapon, an anti-capitalist cat and dog” [Called for by name: Dead Cartoonists Identified, Sky News, January 7, 2015]. In fact, the magazine’s latest cover featured a vicious caricature of Michel Houellebecq, mocking the author for his newly released book prophesying the Islamic conquest of France.

But equal opportunity willingness to offend didn’t save Charbonnier or anyone else. Nor did the police protection that Charlie Hebdo enjoyed seem to even inconvenience the highly-disciplined attackers: the unarmed officers were forced to retreat [Unarmed French police literally retreated in the face of Islamist attackers, by Noah Rothman, HotAir, January 7, 2015]. The terrorists’ execution-style killing of a wounded French policeman begging for his life provided the defining image for the day. It should shame any self-satisfied protesters from ever using the despicable slogan “Hands Up, Don’t Shoot.”

Yet even as leftist cartoonists and satirists were butchered in their offices, the MSM hastened to change the subject to the real danger—the anti-immigration policies of the French National Front.

Tony Barber at the Financial Times took the opportunity of the attacks to caution that “some common sense would be useful at publications such as Charlie Hebdo, and Denmark’s Jyllands-Posten, which purport to strike a blow for freedom when they provoke Muslims.” The danger, of course, is the “siren songs of the far right” represented by “Marine Le Pen and her far-right National Front.” [The gunmen in Paris attacked more than a Muslim-baiting magazine, January 7, 2015]

Richard Seymour veered into the territory of self-caricature by telling people that anyone who values the anti-Islamic caricatures of Charle Hebdo needs to be “reading Edward Said’s Orientalism, as well as some basic introductory texts on Islamophobia, and then come back to the conversation.” The fact that he wrote this in a U.S. journal entitled Jacobin gives his words a special poignancy.

[S]houldn’t line up with the inevitable statist backlash against Muslims, or the ideological charge to defend a fetishized, racialized “secularism,” or concede to the blackmail which forces us into solidarity with a racist institution.
[On Charlie Hebdo, January 7, 2015]

And William Saletan at Slate mourns:

France’s far-right National Front was already on the rise. This attack could help it take over the country. Maybe…the dystopia on the French horizon… [is] a state run by the anti-immigrant right.
[Disgracing Islam, January 7, 2015]

Therefore, even as the bodies are not yet cold, the MSM lectures us that terrorism and murders in the streets must always be regarded with cool objectivity and rationality. At the same time, the possible democratic election of a political party that may limit immigration is met with wild denunciations and nightmarish prophecies of “dystopia.”

Patriots shouldn’t expect murderous attacks on journalists and cartoonists to awaken the MSM to the threat of Islamic terrorism. After all, it’s Europeans who are the existential enemy. Instead, there will be a redoubling of efforts to demand that Europeans abolish their sovereignty and identity.

Thus, Yascha Mounk sneers at the German marches against Islam because,

[T]heir chants of “We are the People” betray how exclusionary their conception of nationhood really is. Appropriating the most famous slogan of the 1989 protests that helped to bring down the Berlin Wall for their own purposes, they are signaling that they will never consider Muslims as true Germans…
[I]n rallying to the defense of our values, we must, as ever, remember what those values actually are: a set of rules and institutions that allows everyone who subscribes to them to live together peacefully—whether they be a devout Muslim or a blasphemous cartoonist.

This is nothing less than a call for Europeans to abolish their own countries as meaningful entities and embrace a “proposition nation” united by vague “rules” and “institutions.”

The problem is that the Europeans have already tried this. From the multicultural model of Scandinavia to the assimilationist policies of France (where even keeping statistics on race is banned), Third World immigration is failing all over Europe. France is an especially troubling test case because the Republic’s policies are as civic-national and color-blind as anything that could be dreamed up by a Beltway Right foundation.

And yet nonetheless, France finds itself embroiled in a kind of permanent low level insurgency in its own cities. In fact, there’s no evidence that Muslims want to live under liberal rules and institutions: polls show that Muslims in Europe radically disagree with the cultural norms that Europeans take for granted.

Therefore, even speaking about “living together peacefully” is misleading. Even if European governments could prevent the occasional terrorist attacks and “random” acts of violence from its newly imported underclass, sheer numbers will allow Muslims in Europe to impose a new political and cultural order on the Continent—regardless of the wishes of the indigenous inhabitants. Whether this is done through violence or through the ballot box is ultimately irrelevant.

And as the attack on Charlie Hebdo shows, even those citizens who define their way of life as satire, irony, and cynical detachment will not be exempted from the demand that they submit to the new order.

The choice confronting Europe is brutal in its simplicity—does it want to be Islamic or not? Simply remaining deracinated consumers will not be an option much longer.

The West cannot be defined simply by the rejection of Islam or as a collection of legal norms. It is a culture created by a specific people and it will be destroyed if that people is dispossessed. Europeans have the self-evident right to secure their homelands for themselves, without regard to the claims others make upon it.