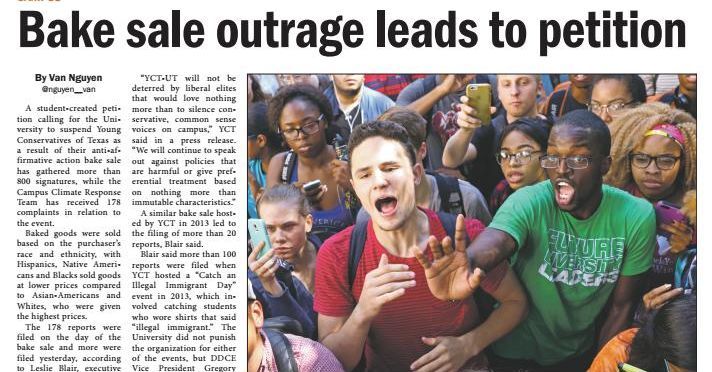 Report From Occupied America: Student Patriots Suppressed By University Of Texas—Betrayed By GOP

Outrage greeted the recent attempt by Young Conservatives of Texas at UT-Austin to use a staple of campus conservative activism to start a debate on illegal immigration” a “Catch An Illegal Immigrant Day” event. The event was suppressed, but the controversy was more successful in showing the truth about illegal immigration than any single event could ever have been. What Americans learned:

Lorenzo Garcia, the head of YCT at Austin, is evidently an honorable “white Hispanic” from the way the Main Stream Media is treating him. Knowing that “if we held a forum or a debate no one would show up,” Garcia planned the game as a way to spark a real debate on campus. Five students would wear shirts that said “illegal immigrant,” and any student catching them who presented a valid ID and said “Border Patrol” would receive a $25 gift card.

The result was the kind of hand-waving, wrist flapping, high pitched hysteria typical of today’s well-trained university student. Vast protests seized the campus organized by supposedly “hundreds of pro-immigration activist groups” [italics added]. Professional Hispanics like America Ferrera latched on to do their bit for media-friendly social justice and pretended to be oppressed before jetting back to Hollywood. [What the Swift Response to Texas’ ‘Catch an Illegal Immigrant Game’ Tells Us About the Reform Movement, by Esther Yu-His Lee, ThinkProgress, November 21, 2013]

There were even protests as far away as Cornell University, with student reporters thoughtfully interviewing mainstream campus leaders such as the campus head of the Movimiento Estudiantil Chicano de Aztlán (MECHA) so she could condemn “dehumanization” of other ethnic groups—while predictably ignoring MECHA’s Politically Correct version of hate. [Catch an Illegal Immigrant’ Counter-Protest Takes Cornell Arts Quad.” By Aimee Cho, The Cornell Daily Sun, November 21, 2013. The original title of this article judging from the URL was “Students Support Undocumented Peers,” although that was evidently changed.]

“‘Lorenzo Garcia is clearly not one to be to be easily cowed by protest. This same chapter of YCT hosted an “Affirmative Action Bake Sale” earlier this year, charging different races different prices for baked goods to satirize Affirmative Action. Garcia obviously knew a reaction was coming and shrugged off protesters as “sticks and stones… we’re not going to let anything like that stop us.” [UT Student Group Plans ‘Catch an Illegal Immigrant’ Event, by David Rauf, Houston Chronicle, November 18, 2013]

However, YCT was stopped. The reason: a two-pronged assault, from the University of Texas administration—and from the Texas Republican Establishment.

UT President Bill Powers[Email him] predictably defended the school’s minority mascots. He intoned that “as Americans, we should always visualize our Statue of Liberty and remember that our country was built on the strength of immigration” and that YCT is “completely out of line with the values we espouse at the University of Texas at Austin.”

More ominously, a professional black and “vice president for diversity” a.k.a. multicultural commissar grandly named/wp-content/uploads/imagecache/fullsize/images/james_fulford/vincent_gregory1.jpg [Email him] warned YCT that

If the members of YCT carry out their plan for ‘Catch an Illegal Immigrant,’ they are willfully ignoring the honor code and contributing to the degradation of our campus culture. Young Conservatives of Texas to stage ‘catch an immigrant’ game on University of Texas campus, Associated Press, November 18, 2013

(I note in passing that UT-Austin’s “campus culture” is presently so refined presently that it was ranked by College magazine as the most “Down to… [Fornicate]” campus in America). [ The 10 Most DTF Campuses, by Alejandra Saragoza, February 21, 2012 ]

This threat was a serious matter. As FIRE [Foundation for Individual Rights in Education] notes:

Violations of the honor code at UT-Austin are subject to a range of penalties up to and including expulsion. So Vincent’s statement suggests that regardless of whether a student’s speech is protected by the Constitution, it may result in disciplinary action at UT-Austin—a public institution legally bound by the First Amendment. [Emphasis added]

But the Texas GOP was even worse than the Leftist campus bureaucrats.

The improbably-named “William Hampton Williams II," not a caricature straight out of Tom Wolfe but a former Young Republican who actually supported the game as an NYU student in 2007, now claimed to believe that “Illegal immigration is a serious issue and the conservative argument wins on its own, and stunts and gimmicks like this detract from the debate.” Not coincidentally, WHW III is managing Eric Opiela’s campaign for Texas agricultural commissioner.

Presumably, the right way to talk about immigration was illustrated by the increasingly-unhinged Salon.com, which praised a “really thoughtful response,” at Buzzfeed by professional illegal Jose Antonio Vargas. [Jose Antonio Vargas responds to organizers of “catch an illegal immigrant” event, November 22, 2013]

The ever-predictable Vargas called YCT “ignorant” and “deeply offensive” as well as approvingly quoted black Congressman John Lewis whining about “hate.” Then, without self-awareness, Vargas called for a “real conversation” about immigration – which means hosting him for a speech and airing his propaganda film. [What I’d Say to the Students who Organized The “Catch an Illegal Immigrant” Event, Buzzfeed, November 22, 2013]

In the face of all this, YCT’s Garcia finally broke, cancelled the event and quasi-apologized, calling the plan “misguided.”

But he also denounced the university’s attack on free speech, specifically citing his members’ fears that it would retaliate against them and their fears for their own safety. He also noted the racially-charged and derogatory messages directed against him: “The reactions of some who claim that YCT is creating a demeaning or degrading environment on campus have been truly disgraceful.”

But we can expect that these “disgraceful” reactions will elicit no response from UT—in contrast to the frenzied ululations that overtake a campus whenever a left-wing minority claims his feelings are hurt.

It is important to note that here is nothing new about the “Catch an Illegal Immigrant Event.” Even the Beltway Right Leadership Institute used to include it as a standard activism tactic in their “CLP 101” booklet given to conservative groups. There was a previous attempt to use the tactic by a YCT chapter at the University of North Texas in 2005. It actually happened at the University of Iowa in 2007.

There’s also nothing new about the Republican Party’s cowardly response. In Michigan in 2006, College Republican field representative Morgan Wilkins tried to organize the event on the campus of the University of Michigan and Michigan State University. MSNBC’s Keith Olbermann, in response, called her the “Worst Person in the World.”—and she was also condemned by Beltway Right caricature Ken Mehlman, then Chairman of the Republican National Committee, who wrote a letter to then-DNC head Howard Dean saying that Wilkin’s tactics were “reprehensible.”

The message that Conservatism Inc. is sending to patriotic college students: either shut up and keep your heads down entirely —or focus on safe or tangential causes.

Thus, while Chicano groups like MECHA openly organize racial nationalism on campuses throughout the United States, “conservative” groups amuse themselves by hosting African-American alleged adulterer, pizzaman, and Beltway Right intellectual leader Herman Cain to babble about limited government; or, like the surging but silly campus libertarians, bravely condemn “racism” and “homophobia” in the name of free markets.

Absent a real opposition, American universities are being gradually transformed into Affirmative Action degree mills designed to provide credentials to “students” who are either intellectually unqualified, illegally in the country, or both. The result: contemporary higher education graduates children less mature, less responsible, and less independent than the young adults who entered.

I speak here from ten years of close observation. For example, I have seen students literally burst into tears when confronted with an Affirmative Action bake sale challenge to their painfully-acquired Politically Correct credentials.

Jose Antonio Vargas is right— illegal aliens are not criminals. They are far worse. Criminals are members of the political community who have violated a law but are not expelled from the polity. Illegals are parasitical and privileged invaders, openly hostile to the historic American nation, motivated by anti-American, anti-white animus. And now, it seems, they are beyond criticism at formerly American universities.

Texas Republicans are complicit in this surrender. Meanwhile, Texas Democrats are licking their lips at the demographic changes that will render the GOP irrelevant—and no doubt laughing at the Republicans’ strategic stupidity.

There is only one way to get change at the University of Texas and other public universities: patriots must expand the battlefield. The cowardly actions of Attorney General Abbot must be remembered and revenged. Texas taxpayers should take a close look at how their money is exploited by race profiteers like Dr. Gregory J. Vincent.

And most importantly, Texans should demand that “Catch an Illegal Immigrant Day” should not be a onetime game, but everyday standard operating procedure in the Lone Star State.