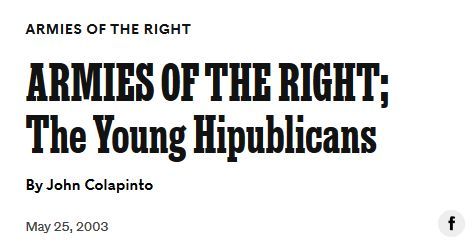 KiddyCons Cool - But Not Conservative

The New York Times magazine is not exactly a citadel of conservative thinking, so at first glance it was a bit odd that last Sunday's issue sported a sizeable article about the new generation of conservative leaders at colleges and universities across the country. Yet, as you read John Colapinto's friendly account of "The Armies of the Right," you may begin to grasp why he and the magazine want to push these particular kiddy-cons into the spotlight. [Armies Of The Right; The Young Hipublicans, By John Colapinto, May 25, 2003 Pay archive, free]

Mr. Colapinto, a contributing editor for Rolling Stone, concentrates on a band of conservatives at Bucknell University, but he's pushing the idea that these founding members of the college's Conservatives Club are not untypical of what passes for the "right" on most other campuses today, "a new breed of college conservative, one poised to inherit the responsibility of shaping the Republican Party in the years to come."

In some respects there's nothing unusual about any of them.

But one trait Mr. Colapinto thinks is distinctive of the new generation is how they dress. "Many of those Reagan-era conservatives announced their politics on campus with their dress and grooming, the men sporting Clark Kent haircuts, blue blazers, red ties, loafers; the women tended to wear skirts and heels." Today all that is gone.

"Today," Mr. Colapinto writes, "most campus conservatives who hope to be effective won't dress like George Bush or Dick Cheney. The idea is to dress like a young person."  In the meetings he attended, "there are plenty of ragged T-shirts, backward baseball caps and frayed jeans in the room." And it's not just clothes that distinguish the new conservative children from their elders. "Many members of the Bucknell conservatives club … endorse same-sex unions," and one member recently wrote an article in the club newspaper "supporting gay marriages."  Bucknell campus leader Charles Mitchell chirps that "being a conservative can be cool" and "not just something that wacko people in Alabama do."

Being "cool" seems to be a major concern of these children, not only in dressing like slobs but also in what they think, and as the author acutely notes, much of what the campus conservatives think and say "is something someone told them to say." At no point in his article does Mr. Colapinto mention a single major political thinker of the past or present who has exerted any discernible impact on them. That's probably because there aren't any. The people who tell them what to think and say apparently are the "movement conservative" foundations in Washington and New York that fund their newspapers and provide them with the kiddy-con edition of "Dress for Success."

Hence it's hardly surprising that the youngsters he interviews have a dim if embarrassingly ignorant view of the current cat fight between paleo-conservatives and neo-conservatives.

Young Mr. Mitchell and his friends "can't abide" the paleos, whom they identify as "paleos like Pat Buchanan—and Bob Novak" and "people who think Lincoln started the era of big government," Mr. Mitchell sneers. "That's paleo. The paleos are the people who give us a bad rap. They carry all these tinges of anti-Semitism and racism—and that's what people expect from us. People expect us to be like Pat Buchanan, like, 'We're diluting our great Western culture by letting immigrants in.' I don't think any of us buy that."

What mainly emerges from Mr. Colapinto's portrait is the utter shallowness of most of what Mr. Mitchell and his comrades do "buy"—and how eager they are to conform and make sure everyone knows they conform to the icons, images, stereotypes, and values in which a dominant liberalism has immersed them and their generation. Their problem with the supposed "anti-Semitism and racism" of the paleos seems to be simply that they cause them image problems. Not only do the kiddy-cons seem to know nothing about their own real heritage or the forces that threaten it; they seem unable to grasp that those threats are already imbedded in the very "culture" they embrace.

And that's exactly what Mr. Colapinto finds no encouraging about them. The kiddy-cons may swagger on about the "free market," "patriotism," and even the oppressiveness of the multiculturalist speech and behavior codes that prevail in their schools, but what Mr. Colapinto has detected is that these kids present no serious threat whatsoever to the kind of culture he, Rolling Stone, and the New York Times have striven so hard to impose on the country.  He's probably right that the kiddy cons will be "shaping the Republican Party in the years to come." He has every reason to hope so.