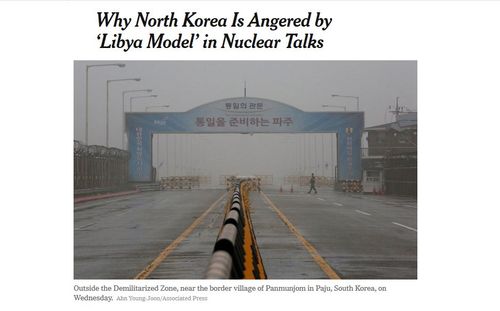 Why North Korea Is Angered by ‘Libya Model’ in Nuclear Talks

When North Korea suddenly threw a historic summit meeting with the United States into question on Wednesday, it cited — five times — the fate of another country and another leader, half a world away, as an example of why no one should trust American efforts to disarm another nation.

The country was Libya, and the leader was Col. Muammar el-Qaddafi, who made a bad bet that he could swap his nascent nuclear program for economic integration with the West. That deal, executed by the Bush administration nearly 15 years ago, is a footnote to American histories of that era.

But it has always loomed large for the North Koreans. …

What happened in Libya?

In 2003, Colonel Qaddafi saw the American invasion of Iraq and the toppling of Saddam Hussein, and may well have concluded that he was next. In a lengthy, secret set of negotiations with Britain and the United States, he agreed to voluntarily hand over the equipment he had purchased from A.Q. Khan, a leader of the Pakistani nuclear program. North Korea and Iran had also been customers of Dr. Khan, who was later placed under house arrest after his activities were exposed.

The Libya material was flown out of the country, much of it placed at an American weapons laboratory in Oak Ridge, Tenn. When President George W. Bush announced the deal, he made a clear reference to North Korea and Iran when he said, “I hope other leaders will find an example” in Libya’s action.

What happened less than a decade later might be at the heart of what Kim Jong-un appears to fear.

The United States and its European allies began a military action against Libya in 2011 to prevent Colonel Qaddafi’s threatened massacre of civilians. President Obama acceded to arguments from Secretary of State Hillary Clinton to join the European-led action.

But no one in the Situation Room debated what message the decision to turn on Colonel Qaddafi might send to other countries that the United States was trying to persuade to relinquish their weapons, according to interviews conducted later with more than a half-dozen people engaged in the discussion.

The Libya intervention allowed anti-government rebels to put Colonel Qaddafi on the run, and months later they pulled him from a ditch and killed him. Since then, Libya has devolved into a dysfunctional state. And North Korea has taken notice.

Thank goodness Hillary was the most qualified-to-be-President person ever, or she might really have screwed the pooch back in 2011.