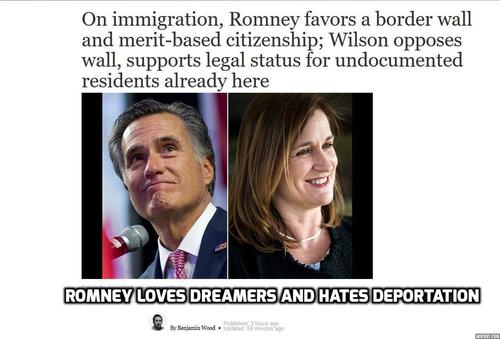 Mitt Romney began his Senate campaign by attacking President Trump on immigration and will likely be the leading voice of Never Trump conservatives after November. True to form, Romney is now attacking both parties for supposedly handling immigration poorly. Ominously, Romney is using the phrase "immigration reform," which as VDARE.com readers know is a code word for an Amnesty/Immigration Surge.

Romney, a former Massachusetts governor and two-time presidential candidate, said immigration reform would be one of his top priorities if elected to the seat of retiring Sen. Orrin Hatch, R-Utah...

Compared to other campaign issues, the two candidates are relatively close together on the subject of immigration. Both oppose mass deportations and family separation, and support investments in border security and legal protections for so-called “Dreamers," or residents brought into the country illegally as children.

It's nothing short of infuriating that in this reddest of red states, the GOP will once again be saddled with a Senator who puts the opinion of liberal journalists above the defense of his country. Still, Romney is backing the president on merit-based immigration and the need for a border wall.

However, one suspects that Romney would only vote for a border wall if it was coupled with some form of amnesty. Romney also followed the media line and attacked the president on "family separation" in a recent debate. However, this was coupled with some promising noises on mandating E-Verify, something that President Trump, incredibly, is not pushing for.

Romney called family separation “inexcusable” and a “dark chapter” in history. He favors stronger border security and an e-verify system for employers. Dreamers, he said, should be allowed to stay in the country with legal status, but “get in line” with others to seek citizenship.

As always when it comes to Mitt Romney, it will be a question of how much political pressure can be put on him. A few months ago, he was claiming to be more of a hawk than President Trump on immigration and opposed legal status for "Dreamers". [Romney: I'm more of a hawk on immigration than Trump, by Brett Samuels, The Hill, March 27, 2018] Now, he evidently supports it. If he gets into the Senate, as is almost certain, Republicans will have another Jeff Flake on their hands.