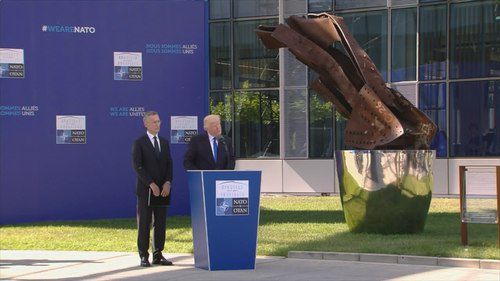 Of President Donald Trump's explosion at Angela Merkel's Germany during the NATO summit, it needs to be said: It is long past time we raised our voices.

America pays more for NATO, an alliance created 69 years ago to defend Europe, than do the Europeans. And as Europe free-rides off our defense effort, the EU runs trade surpluses at our expense that exceed $100 billion a year.

To Trump, and not only to him, we are being used, gouged, by rich nations we defend, while they skimp on their own defense.

At Brussels, Trump had a new beef with the Germans, though similar problems date back to the Reagan era. Now we see the Germans, Trump raged, whom we are protecting from Russia, collaborating with Russia and deepening their dependence on Russian natural gas by jointly building the Nord Stream 2 pipeline under the Baltic Sea.

When completed, this pipeline will leave Germany and Europe even more deeply reliant on Russia for their energy needs.

To Trump, this makes no sense. While we pay the lion's share of the cost of Germany's defense, Germany, he said in Brussels, is becoming "a captive of Russia."

Impolitic? Perhaps. But is Trump wrong? While much of what he says enrages Western elites, does not much of it need saying?

Germany spends 1.2 percent of its gross domestic product on defense, while the U.S. spends 3.5 percent. Why?

Why—nearly three decades after the end of the Cold War, the collapse of the Warsaw Pact, the crackup of the Soviet Union and the overthrow of the Communist dictatorship in Moscow—are we still defending European nations that collectively have 10 times the GDP of Vladimir Putin's Russia?

Before departing Brussels, Trump upped the ante on the allies, urging that all NATO nations raise the share of their GDPs that they devote to defense to 4 percent.

Brussels may dismiss this as typical Trumpian bluster, but my sense is that Trump is not bluffing. He is visibly losing patience.

Though American leaders since John Foster Dulles in the 1950s have called for a greater defense effort from our allies, if the Europeans do not get serious this time, it could be the beginning of the end for NATO.

And not only NATO. South Korea, with an economy 40 times that of North Korea, spends 2.6 percent of its GDP on defense, while, by one estimate, North Korea spends 22 percent, the highest share on earth.

Japan, with the world's third-largest economy, spends an even smaller share of its GDP on defense than Germany, 0.9 percent.

Thus, though Seoul and Tokyo are far more menaced by a nuclear-armed North Korea and a rising China, like the Europeans, both continue to rely upon us as they continue to run large trade surpluses with us.

We get hit both ways. We send troops and pay billions for their defense, while they restrict our access to their markets and focus on capturing U.S. markets from American producers.

We are giving the world a lesson in how great powers decline.

America's situation is unsustainable economically and politically, and it's transparently intolerable to Trump, who does not appear to be a turn-the-other-cheek sort of fellow.

And he appears earnest about reducing our massive trade deficits in goods that have been bleeding jobs, plants, equipment, capital and technology abroad.

The latest tariffs Trump has proposed, on $200 billion worth of Chinese-made goods, would raise the price of 40 percent of China's exports to the U.S. and begin to shrink the $375 billion trade surplus Beijing ran in 2017.

Trump said upon departing Brussels he had won new commitments to raise European contributions to NATO. But Emmanuel Macron of France seemed to contradict him. The commitments made before the summit, for all NATO nations to reach 2 percent of GDP for defense by 2024, said Macron, stand, and no new commitments were made.

As for Trump's call for a 4 percent defense effort by all, it was ignored. Hence the question: If Trump does not get his way and the allies hold to their previous schedule of defense commitments, what does he do?

One idea Trump floated last week was the threat of a drawdown of the 35,000 U.S. troops in Germany. But would this really rattle the Germans?

A new poll shows that a plurality of Germans favor a drawdown of U.S. troops, and only 15 percent believe that Germany should raise its defense spending to 2 percent of GDP.

Since exiting the Iranian nuclear deal, President Trump has demanded that our European allies join the U.S. in reimposing sanctions. Now he is demanding that the Europeans contribute more to defense.

What does he do if they defy us? More than likely, we will find out.