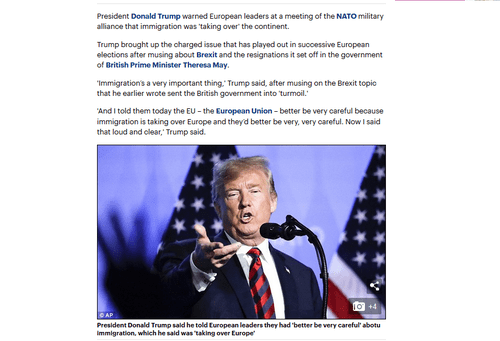 Defender Of The West: President Trump Warns Europe On Immigration

President Trump's recent NATO summit is outraging the usual suspects, the journalists and their pet Democrats. President Trump pushed for our NATO "allies" to increase their defense spending, which in a rational world would be interpreted as signal President Trump is opposing supposed Russian expansion [Trump Declares Victory After NATO Meeting: Says Committed To Pay More, by Oliver JJ Lane, Breitbart, July 12, 2018]. In the irrational American media and ruling class, this is instead taken as evidence President Trump destroying the NATO alliance [Kerry condemns Trump's 'strange' and 'disgraceful' rhetoric at NATO, by John Bowden, The Hill, July 11, 2018].

How American interests are served by allowing European countries to dump all their defense spending on American taxpayers is a mystery. One can never underestimate the furious contempt America's ruling class has for American citizens.

However, President Trump's most significant comment came when he spoke to the media about immigration.

At the heart of Europe, U.S. President Donald Trump on Thursday had a dire warning for his political counterparts across the Atlantic -- immigration is taking over Europe.

"I'm very strong on immigration. I made a point today. I said you've got to stop ruining," Trump warned NATO allies, 22 of whom are also members of the European Union.

"You're gonna have a lot of problems. You see what's going on throughout the world with immigration. I, probably at least partially, won an election because of immigration," he said.

Back in the U.S., Trump is currently under fire over his administration's zero-tolerance policy on America's southern border with Mexico.

"If you look at Italy, Giuseppe, who I got to know quite well in the last month and a half, he won his election because of strong immigration policies on Italy," Trump said, referring to Giuseppe Conte, Prime Minister of Italy.

President Trump seems to understand intuitively that the military exists to serve the nation, not the other way around. There's no point in even having a military if a country is going to have open borders. Moreover, while leftists love to contrast supposedly barbaric, right-wing America with social democratic Europe, nationalists are rising on the Continent. President Trump now enjoys a firm ally in the heart of Western Europe because of the recent elections in Italy.

All eyes now are on the October regional elections in Bavaria, and what impact they will have on the German government of Angela Merkel. Conservative forces are rising in the region and there is a strong possibility of a regional government more closely aligned with the governments in Rome and Vienna than that in Berlin. The possiblity is upsetting the Europhobic usual suspects in the anti-Western press [Bavaria First: How a provincial party is tearing Germany and Europe apart, by Philipp Liesenhoff, Washington Post, July 11, 2018]  If Germany can be flipped like Italy, perhaps NATO will one day serve a useful purpose and become a civilizational defense force for the West, protecting the borders of the Continent from unlimited hordes of Third World migrants. For now, the alliance simply facilitates the invasion.