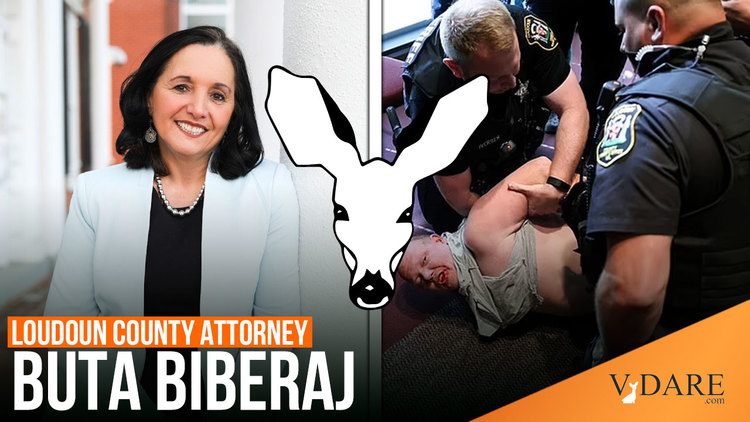 If you want to know why you should reread Aleksandr Solzhenitsyn and absorb his most famous passage from The Gulag Archipelago, consider what happened last week. Leftist federal prosecutors in the Southern District of New York sent the FBI to raid the homes of dissident journalists who work for James O’Keefe’s Project Veritas. On Saturday, they searched O’Keefe’s apartment [F.B.I. Searches James O’Keefe’s Home in Ashley Biden Diary Theft Inquiry, by Michael S. Schmidt, et al., New York Times, November 6, 2021].

O’Keefe is famous for his undercover videos that expose Leftists at their worst. But they, supposedly, weren’t the problem. O’Keefe reportedly once possessed Ashley Biden’s stolen diary. In it, the President’s daughter wrote  that she had “probably not appropriate” showers with her father as a child. The Project Veritas raids are just the latest proof that we are living in an anarcho-tyranny in which the Deep State and its communist legal apparatus are prosecuting law-abiding, patriotic Americans.

The young conservative journalists must have been somewhat surprised, and terrified, given that O’Keefe never published the contents of the diary: he gave it to the cops.

The Trump administration’s Justice Department, then led by Attorney General William P. Barr, opened an investigation into the matter shortly after a representative of the Biden family reported to federal authorities in October 2020 that several of Ms. Biden’s personal items had been stolen in a burglary, according to two people briefed on the matter.

Mr. O’Keefe said in the video that “tipsters” had reached out to Project Veritas in 2020 to alert them to the existence of the diary, saying that they had stayed in a room that Ms. Biden had recently been in. But Mr. O’Keefe said that his group could not authenticate the diary and made an “ethical” decision to not publish it.

He said that Project Veritas gave the diary to “law enforcement” and attempted to return it to a lawyer representing Ms. Biden, who he said “refused to authenticate it.” Mr. O’Keefe portrayed the investigation as politically motivated, questioning why the Justice Department under Ms. Biden’s father was pursuing the case.

So why a federal dragnet over nothing more than a petty theft?

To send a message.

No wonder the FBI and Justice Department went after O’Keefe with even the flimsiest excuse. They’d love to do to him and his courageous colleagues what they’re doing to Trump supporters at the January 6 Mostly Peaceful Protest [An Alarming Letter From January 6 Protester Nathan DeGrave, From His Jail Cell in Washington DC, by Sundance, Conservative Treehouse, October 30, 2021].

But O’Keefe is just the latest target. Prompted by a letter to Biden from the National School Board Association, U.S. Attorney General Merrick Garland sicced the FBI on angry parents who attend school board meetings to protest Critical Race Theory curricula. Those Americans, the NSBA wrote, are “domestic terrorists”:

Attorney General Merrick Garland on Thursday defended his decision to mobilize the FBI to work with state and local law enforcement in addressing rising threats of violence against school board members during testimony before Congress.

“Parents have been complaining about the education of their children and about school boards since there were such things as school boards and public education," Garland said, facing a deluge of criticism from Republicans on the House Judiciary Committee who accused him of opening a “snitch line on parents.”

The criticism from Republicans comes in the wake of a memorandum the attorney general issued earlier this month that tasked the FBI and U.S. attorneys' offices to meet in the next 30 days with federal, state and local law enforcement leaders to outline strategies for addressing a spike in harassment, intimidation and threats of violence against school board members across the country.

NSBA subsequently apologized, but the damage was done [School boards group apologizes for letter linking protesting parents to domestic terrorism, by Valerie Richardson, Washington Times, October 23, 2021]. The anti-parent outfit got what it wanted, particularly after what happened in Loudoun County, Virginia. A “gender-fluid” boy in a dress raped a ninth-grade girl in a high-school bathroom [Loudoun Co. judge rules teen sexually assaulted girl in school bathroom, by Neal Augenstein, WTOP, October 25, 201]. The girl’s father lost his temper at a school board meeting after a Leftist woman said his daughter was lying, and even worse, after school board members and the county superintendent said no such assault had occurred [Loudoun County Schools Tried To Conceal Sexual Assault Against Daughter In Bathroom, Father Says, by Luke Rosiak, Daily Wire].

“I received multiple death threats directed specifically at me,” Biberaj said. “They’ve been mainly through telephone. I received one on my personal cell phone, which indicated the following phase... 'We're coming for b---!' We received a specific death threat to the office phone, and that was in the game that there was an intent to kill me,” she said.

Biberaj says the alleged threats have poured in over the last three weeks. “Making statements such as, you don’t have to worry about watching you’re back, we're going to come at you from the front," she said.

She believes the callers have both the means and intent to kill her.

She's reached out to the Justice Department and Virginia State Police and is considering hiring private security.

“It's very concerning,” Biberaj said in an exclusive interview with WUSA9.

This provoked the usual point and splutter from WUSA9’s Lashan:

Biberaj has been slammed by the New American, a publication of the John Birch Society, as a Muslim “immigrant prosecutor who arrested an ‘American’ who complained about daughter’s rape.” VDARE, a Southern Poverty Law Center designated hate group, said on Twitter, “Loudoun County prosecutor Biberaj is an Albanian Muslim immigrant from Montenegro. And yes, she was elected by a 1% margin after George Soros paid $845,000 to support her bid.”

Biberaj says her campaign has taken money from Soros, a billionaire philanthropist and mega-donor who was born to Jewish parents. But she said Soros’ team “has never asked for anything in return.” Soros has been a focus of right-wing anger for years. [Links added]

Of course, Soros wouldn’t have to “ask” for anything. Biberaj knows what to do. Example: she freed a violent black thug who attacked cops [Commonwealth’s Attorney Declines to Prosecute Man Charged with Assaulting Leesburg Officer, by Patrick Szabo and Kara C. Rodriguez, Loudoun County Now, October 22, 2020]. And she retweeted with apparent approval a Leftist who wants Tucker Carlson to be imprisoned for inciting domestic terrorism: 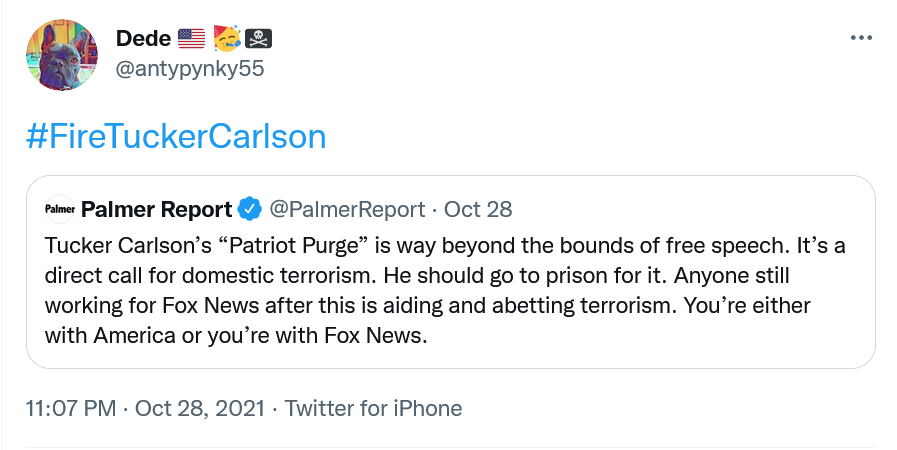 In other words, a state prosecutor agrees that a journalist should be jailed for expressing opinions she doesn’t like. And she wants Merrick Garland’s Department of Justice to investigate VDARE.com for reporting the truth about her alien origins and Leftist funding.

In contrast, consider what happened to “anti-racist” goons who doxxed Loudoun’s angry parents: nothing. The FBI and sheriff essentially said the cyber-terrorists were above the law:

The sheriff’s office says that the Federal Bureau of Investigations had launched a parallel probe into the matter. The FBI said it had no intention, however, of levelling criminal charges.

In March, the sheriff’s office began investigating the group after complainants told them their activities threatened their first-amendment rights, and violated other laws, including stalking, harassment and racketeering.

In addition, they had reportedly put together a “hit list” that included the names, addresses and occupations of people who “opposed the ideologies” of the Facebook group.

Ultimately, the sheriff’s office determined that they would not pursue criminal charges.

So patriot parents in Loudoun County get attacked by Leftist vigilantes and law enforcement not only does nothing, but persecutes the parents. This is anarcho-tyranny.

Let’s not forget how we landed here. Since Donald Trump announced his candidacy in 2015, a lawless, unaccountable Deep State and its MSM Information Ministry has waged total war on Trump and his supporters.

We suffer under a totalitarian communist regime, and not just on the federal level—the cancer has metastasized to the state and the county level too. This is headed in a very bad direction.