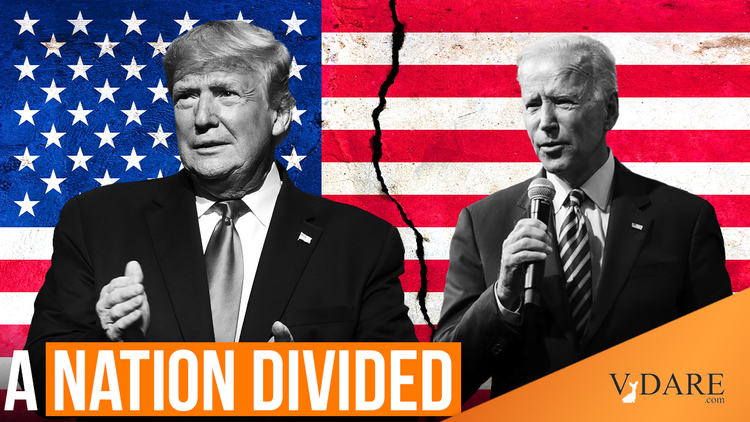 Patrick J. Buchanan: Can A Disintegrating America Come Together?

Earlier by Patrick J. Buchanan: A Most Consequential Presidency

On the last days of the 2020 campaign, President Donald Trump was holding four and five rallies a day in battleground states, drawing thousands upon thousands of loyalists to every one.

Waiting for hours, sometimes in the cold, to cheer their champion on, these rallygoers love Trump as few presidents have been loved. This writer cannot recall a president and campaign that brought out so many and such massive crowds of admirers in its closing days.

And who are these cheering, chanting loyalists who have brought their children out with them to see and remember "the great Trump"—in the eyes of our dispossessed elites?

They are people who belong in a "basket of deplorables," sneered Hillary Clinton: "racist, sexist, homophobic, xenophobic, Islamaphobic" bigots, and a sub-species of humanity that is "irredeemable."

Today's election is an us-versus-them choice unlike any other, for the issues in dispute are broader and deeper than ever before.

And those issues raise questions: No matter who wins, can this nation come together again? And if it cannot—a real possibility—what form will America take as it disintegrates?

Even as voters were mailing in ballots in the millions, stores in our great cities were being boarded up against rioters, looters and arsonists.

Suburban residents, fearful that the urban mobs may one day be coming for them, were stockpiling guns and ammunition.

How divided are we?

The New York Times "Sunday Review" devoted its entire section to Donald Trump, as seen from the eyes of its columnists. On the cover page of the Review ran the headline, "All 15 of our columnists explain what the past four years have cost America, and what's at stake in this election."

Each of the 15 trashed Trump from his or her perspective.

Since World War II, America has held elections where the country seemed at sword's point. Not all were like 1960, where scholar Arthur Schlesinger Jr., felt compelled to write the book, Kennedy or Nixon: Does It Make Any Difference?

Schlesinger felt he had to explain that despite the similarity of the candidates, both in their 40s, it made a difference who was elected.

Yet, even after the most divisive elections of the post-war era—1952 and 1968—the country pulled back together. President Dwight Eisenhower, from 1952 to 1956, and Richard Nixon, from 1968 to 1972, restored unity to the nation during their first terms by ending the Asian wars into which their predecessors had taken the nation.

New leadership ended the wars and brought the United States together.

Americans are not divided over war. One of Trump's successes has been to keep us out of new wars, even if he has not yet extracted us from the wars he inherited.

Today, we are divided over ideology, morality, culture, race and history. We are divided over whether America is the great nation we were raised to revere and love or a nation born in great sins and crimes—such as the near annihilation of indigenous peoples and their cultures and the enslavement of hundreds of thousands of Black peoples from Africa.

In this divided country, at times, Americans seem to detest each other.

Indeed, if the United States did not exist as one nation, would this diverse people ever agree to form a compact to come together, or would we seek to retain our separate identities?

In tearing down the statues of explorers such as Christopher Columbus or the Founding Fathers and their successor presidents, from Andrew Jackson to Abraham Lincoln to Teddy Roosevelt and Woodrow Wilson, the contempt for the country these men helped to bring into being, and for what this country stands for today, is manifest.

A significant slice of America's young believes that the nation to which they belong was detestable from its birth, and that the Western civilization from which it sprang is not worth saving.

In his farewell address, President Ronald Reagan spoke of the America where he was raised and which he cherished:

"The hope of human freedom—the quest for it, the achievement of it—is the American saga. And I've often recalled one group of early settlers making a treacherous crossing of the Atlantic on a small ship when their leader, a minister, noted that perhaps their venture would fail and they would become a byword, a footnote to history. But perhaps, too, with God's help, they might also found a new world, a city upon a hill, a light unto the nations."

How many Americans still believe what Reagan believed? How many yet see America as "a city upon a hill, a light unto the nations"?