What Do Jennifer Rubin and Bret Stephens Have Against "Nativism"?—Oh, Wait...

I'm not an anti-Semite; I never have been; and I don't have much time for anti-Semites. I've written a couple of million words of opinion commentary this past thirty years, all of it archived on my website, and I defy you to find any evidence of anti-Semitism in it anywhere.

However, I've turned against the word "philosemite," for reasons I've explained elsewhere. Basically, it's patronizing. If pressed on the issue, I call myself an anti-anti-Semite. I cherish my Jewish friends, and I have publicly—and again, I think, more than once—expressed gratitude in print for the positive contribution Jews have made to our civilization, way out of proportion to their numbers.

That said, I know the following thing, which anyone who has observed the American political scene surely also knows: A subset of American Jews—a subset, a minority—suffer from a kind of psychological deformation that keeps them trapped in a particular, strangely atavistic type of paranoia, of victim mentality.

In this mentality, it's always 1881 and we're still in Russia. The Jews are cowering behind their doors in fear as the Cossacks rampage through the town, or Christian peasants with pitchforks and flaming brands march on the Jewish quarter.

One side effect of this mentality: an unblinking vigilance, a hyper-sensitivity, towards the slightest tendency of the Gentile majority to drift Cossack-wards. This easily and often slops over into—and I am speaking of a subset of a subset of American Jews—into a generalized dislike, a prejudice, against white Christians.

Another side effect: the feeling that, for an oppressed minority—we're still in 1881, remember: it's always 1881—for an oppressed minority there is safety in courting and joining with other outsider groups for solidarity against the dangerous, dominant Goyim. The great dream of this mentality, in fact, is to get enough of a coalition of outsiders together to outnumber the Goyim, the white Christians. That's why so many Jews are so passionately committed to mass Third World immigration.

It's not hard to find evidence of this. Example: one of the "Intelligence Squared" debate series that took place September 13th. The motion to be debated was "Blame the Elites for the Trump Phenomenon." It lasts an hour and 44 minutes.[Transcript PDF]

That tells you something by itself. That atavistic style of Jewish paranoia that I spoke about, when it hears the word "elites," at once flies to the thought: They're talking about US! … and the hoofbeats of the Cossacks are heard drumming in the distance.

At some mental level Rubin and Stephens read the title of the debate as: "Blame the Jews for the Trump Phenomenon." That's why they're arguing against the motion. No, no, it's not our fault—it's those damn peasants! 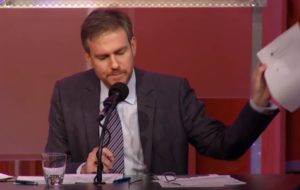 This put them on edge. You can see it in the debate. Stephens actually plays the Holocaust Card at 1h22m, brandishing the print-out of an anti-Semitic tweet he got. Earlier, at 56m, the whole debate had almost veered into a straightforward Christians versus Jews joust. Dealing with Mrs. Clinton's use of the word "irredeemable," Jay Carney and Jennifer Rubin clashed lances thus:

Clip:  (Carney)  I disagree with Bret Stephens and with Hillary Clinton that a quarter of the population is unredeemable. And my bias, on the table, is, I'm a Christian and I think everyone is redeemable …

(Rubin)  We Jews just believe in good and evil. We don't think everyone is redeemable.

It's been a while since I saw the atavistic paranoia of Jews, that subset of them, so starkly presented. The last time was, in fact, when I saw that Sacha Baron Cohen movie Borat, where it's likewise hard to miss.

If I'm right about Rubin and Stephens, the result of the debate did nothing to soothe their paranoia. Part of the format for these Intelligence Squared debates is  that the studio audience is polled at the beginning—how many for, how many against, how many undecided. The debate takes place, then at the end the audience is polled again, to see how many of the undecideds were persuaded which way.

Result: The audience percentage favoring the motion, that our elites were to blame for the rise of Trump, shot up 26 percent, from 32 to 58. The percentage blaming the peasants went up only six percent, 27 to 33.

I'll just add here that if you take exception to all that coming from me, a Gentile, perhaps you'll take from Caroline Glick, a Jew. (I know I'm not allowed to say "Jewess" because I checked once with a Jewish lady editor I was working for. Quote from her: "We can say it, but you can't.")

Ms. Glick covers that same debate from the point of view of an ethnocentric Jew, and her coverage comes out sounding a lot like mine. She points up the rather high level of open anti-Semitism on the political Left. Then—

The problem on the Republican side of the aisle … is not that the party has turned against the Jews. The problem is that a large contingent of prominent Jewish Republicans has decided to commit political suicide …

Rather than … accept the will of their fellow Republicans, this year the most prominent members of the Jewish Republican elite have opted to attack Trump and his voters.

That is, they have decided to commit political suicide. Twilight of American Jewry, Jerusalem Post, September 15, 2016

That's you she's talking about, Jennifer Rubin and Bret Stephens.

As I said, both sides in that Intelligence Squared debate were anti-Trump. Whether all four were actually NeverTrumpers was not clear. You can be anti-Trump without being NeverTrump, on the lesser of two evils principle.

But at least one of the Jewish side was a NeverTrumper, though. How do we know this? These are opinion journalists, recall. He wrote about it.

September 12th, the day before the debate, Stephens posted a Q&A column in the opinion pages of the Wall Street Journal, where he is a Deputy Editor and opinion columnist. Both the Qs and the As were apparently written by Stephens himself, a common format in opinion journalism. I've done columns in that format myself.

The title of Stephens' column: Nevertrump For Dummies.

Subtitle: "The nominee has more in common with Kanye West than with Steve Wynn."

That subtitle threw me. Kanye West I know about at a very vague level. He's one of those famous-for-being-famous people, right? I couldn't tell you a single darn thing he's done, but I see his name on the scandal sheets when I'm in the supermarket checkout line.

Who's Steve Wynn, though? I had to look him up. He's a billionaire property developer, very much like Trump. He's built luxury hotels and casinos.

So what's he doing in that subtitle? Well, he seems a bit more Upper West Side than Trump. He's a connoisseur of fine art, for example. I don't see much otherwise to place him at one end of an acceptability spectrum that has Donald Trump and Kanye West at the other end.

Or do I? Checking a bit further, I see that Steve Wynn, like Bret Stephens, is an American-born Ashkenazi Jew, original name Weinberg. So on that acceptability spectrum, we have two Jews at one end and two Gentiles at the other—just like in the following day's debate!

Kanye West is a Gentile; I checked. In fact, a couple of years ago he got himself in a spot of bother by telling a New York radio station that "Black people don't have the same level of connections as Jewish people.”.[Kanye West wants to take back 'ignorant compliment' about Jews , Jerusalem Post, December 22, 2013]I wouldn't be terrifically surprised to learn that it was exactly that remark that lodged itself in Bret Stephens' mind, causing him to pair off West with Trump at the dark end of the spectrum.

OK, getting past the subtitle, what's in the column? Well, you can read it for yourself. No, you don't need a Wall Street Journal subscription—who can afford those things? What you do is, put the title, "NeverTrump for Dummies," into the search box at Google News. I'll just pull out one single quote.

First thing I did was Ctrl-F on the word "nativist." Yep, there it is. I knew it would be: "Mr. Trump's nativist brand of politics is much further removed from conservatism than Mrs. Clinton's mainstream liberalism," end quote.

There you see the paranoia, the immigration fanaticism. For a politician to be “nativist”—to favor the natives, the people born in his country, over foreigners—is worse, much worse, than Clintonian liberalism, says Bret Stephens.

For him, to be “nativist” is worse than anything, because if a “nativist” gets power, our Coalition of Others will never have numbers to swamp the Goyim. They'll be dominant for ever, and sooner or later they'll turn on the Jews! [Hoofbeat sounds].

I know, it sounds nutty. Possibly I am being paranoid. But watching that debate, and then reading Bret Stephens' print piece, it does seem to me that Bret Stephens' paranoia, that atavistic fear, is in plain sight, just under the surface.

What, after all, is wrong with nativism? Why is this a pejorative—even on the political Left, never mind from the pen of a self-described conservative.

For a government to favor its own people over foreigners: There's something wrong with that? What? What, exactly?

Because it's "hateful"? What nonsense! I favor my own kids over your kids, by a mile and a half; but I don't hate your kids, so long as they don't come into my house uninvited. Good luck to them.

Good luck to foreigners: Jolly good luck to them all, the long and the short and the tall.

Now, will our government please attend to the fortunes and concerns of our people, our citizens, and let foreigners shift for themselves?