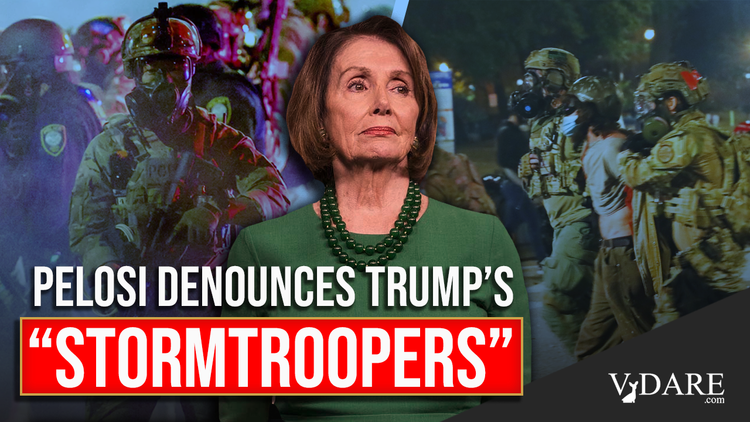 Earlier: It Has Come To Blood: Riots Are Getting More Dangerous Every Day

With the Mark O. Hatfield United States Courthouse under nightly siege from violent radicals, and Portland's police hard-pressed to protect it, President Trump sent in federal agents to secure the building.

The reaction from Speaker of the House Nancy Pelosi:

"The use of stormtroopers under the guise of law and order is a tactic that is not appropriate to our country in any way."

Majority Whip James Clyburn endorsed the speaker's equating of the U.S. law enforcement officers to Ernst Rohm's SA thugs being deployed to do the dirty work of Adolph Hitler.

"Nobody asked the federal government to come into Portland. Nobody asked them to come to Seattle," ranted Clyburn. "This is something that's made up of whole cloth by this administration as an excuse for sending in stormtroopers to incite the people."

Clyburn had earlier compared the U.S. officers sent to Portland to Heinrich Himmler's Nazi secret police: "This president and this attorney general seem to be doing everything they possibly can to impose Gestapo activities on local communities, and this is what I've been warning about for a long time."

His Gestapo comparison recalls Sen. Abe Ribicoff's denunciation of the Chicago police of Mayor Richard J. Daley during the 1968 Democratic National Convention, after police clashed with radicals in Grant Park: "With George McGovern, we wouldn't have Gestapo tactics in the streets of Chicago!"

What do the men and women of the FBI, DEA, ICE, DHS, CBP and the U.S. Marshals Service think of congressional leaders who equate them with Nazi stormtroopers and the Gestapo?

Outraged that Trump sent in federal agents to protect a building they had under siege for weeks, the Portland mob came out in even greater numbers and rioted through the weekend. Saturday night, there were solidarity riots with Portland in Seattle, Oakland, Austin, Richmond, and other cities.

Consider the depth of hatred of Trump that would cause leaders of the Democratic Party to compare U.S. law enforcement to Nazis.

Still, to date, no apologies have been heard.

Yet, as police are again being cursed and showered with debris, it is hard to see how this country reunites, and around what, no matter which party prevails in November.

In addition to the reigniting of protests and riots in urban centers there has come, in tandem with demands to "defund the police," a surge in violent crime. Last week, Trump offered some staggering statistics:

"In New York City, over 300 people were shot in the last month alone, a 277 ... percent increase over the same period of a year ago. Murders this year have spiked 27 percent in Philadelphia and 94 percent in Minneapolis compared to the same period in 2019.

"Perhaps no citizens have suffered more from the menace of violent crime than the wonderful people of Chicago ... At least 414 people have been murdered in the city this year, a roughly 50 percent increase over last year. More than 1,900 people have been shot. These are numbers that aren't even to be believed."

The New York Times suggests that a new "Silent Majority" of 2020, unlike Richard Nixon's Silent Majority of 1969, backs the protesters and their causes.

A dissent: While the country was disgusted and outraged at George Floyd's death from that cop kneeling on his neck, and supported the protests and the calls for police reform, two months of leftist rampages have taken their toll.

When the protests turned into riots, when the looting and arson began, when the statues began to be pulled down, when the rampages went on and on for weeks and months after Floyd's death, support began to wane. And it is dissipating quickly.

The country is not going to sit still for three more months of this. At some point soon, America is going to say: Enough is enough.

Moreover, Trump has turned a permanent presidential spotlight on a real outrage: the shootings and killings that go on year in and year out, and are now escalating, especially in poor black neighborhoods of major cities, and are accepted as normal by the same liberal Democrats who have misruled those cities for decades.

Trump has put this issue on the table for the indefinite future. And the ferocity of the liberal reaction testifies to the validity of the issue and the terror of the left that a consistent stand for law and order—and with the cops who guarantee it against the mobs that threaten it—might turn the tide in Middle America back to where it naturally resides.

The majority of Americans believe, and rightly so, that this is a good country. And they will eventually tune out radicals who visibly hate its heroes and history and have on offer nothing but their own inchoate rage.