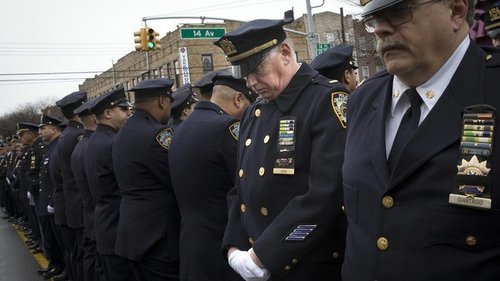 The Democratic Party Is At War With Itself

For the third time, the cops of the NYPD have turned their backs on the mayor of New York.

The first time was when Mayor Bill de Blasio arrived at Woodhull Hospital where mortally wounded officers Rafael Ramos and Wenjian Liu had been taken on Dec. 20. The second was when the mayor spoke at Ramos' funeral. The third was at Liu's service on Sunday.

Detestation of de Blasio among the NYPD and the cops who came from across the country to stand in solidarity with their slain brothers is broad and deep.

And, in a way, de Blasio served as stand-in for Al Sharpton, Eric Holder and President Obama. For all four gave aid and comfort to the war on cops that has raged since Ferguson last August when Officer Darren Wilson shot and killed an 18-year-old who tried to grab his gun.

When a Staten Island grand jury declined to indict the NYPD's Daniel Pantaleo in the chokehold death of Eric Garner, after the 350-pound black man, suffering from heart disease, diabetes and asthma, died resisting arrest, the war on cops went viral and national.

De Blasio, Sharpton, Holder and Obama were all out on point saying that blacks, especially young black males, were all too often victimized by racist cops. And black kids needed to be taught that.

Brimming with moral outrage, protesters took to the streets, blocked Times Square and Grand Central, disrupted Macy's during the Thanksgiving and Christmas holidays, and shut down malls, highways and bridges across the country.

Though their lawlessness was rampant and their chants bespoke a hatred of police, who were compared to the KKK by marchers yelling for "dead cops," these protests were indulged and described as "peaceful."

So it was that on Dec. 20 a deranged criminal decided to make himself famous by putting "wings on pigs" and executing Ramos and Liu in Bedford-Stuyvesant as payback for Garner and Brown.

Suddenly, the real America revealed itself, an America enraged at the cold-blooded assassinations of cops and disgusted with those who had pandered to anti-police protesters. And the America that revealed itself is not good news for the Democratic Party.

For we have seen this movie before, half a century ago.

These riots produced deaths, thousands of arrests, and looting and arson on a scale requiring the National Guard and federal troops. And these rampages were perhaps the principal factor in turning Middle America against a Democratic Party that had been the nation's majority party since 1932.

In 1964, LBJ won 61 percent of the vote. Four years later, his vice president, Hubert Humphrey, got less than 43 percent.

What happened? A civil war had taken place inside the Democratic coalition, not unlike what is going on now. Today's conflict, though not nearly so violent, is daily nationalized by cable and the Internet.

And from the new defensiveness of de Blasio and the muted responses of Sharpton, Holder and Obama, there is no doubt who has lost this battle. A sundered America is siding with the cops and turning against those who turned on the cops.

Something like this happened in Chicago in August 1968: Police, after constant provocation by foul-mouthed radicals, chased them down, clubbed them, and arrested them in Grant Park.

When the dust settled, however, America, to the amazement of the elites, had come down on the side of the cops, not "the kids." political point: That America gave Nixon and Wallace 57 percent of its votes.

The political point: In the 1960s, both George Wallace and LBJ were Democrats. Mayor Daley and the radicals cursing his cops were Democrats. The students who took over Berkeley and Columbia, and the deans and professors whose offices they trashed, were all liberal or leftist Democrats.

The '60s wars over social, moral and cultural issues were bloody scrimmages on the home field of the Democratic Party.

So it is today. Whether the issue is income inequality or the evil of Wall Street, police brutality or black criminality, the hostility and anger among Democrats over these issues makes the Tea Party vs. the GOP establishment look like a badminton tournament on the country club lawn.