Rep. Clyburn: White Women Out to Get Rep. Conyers 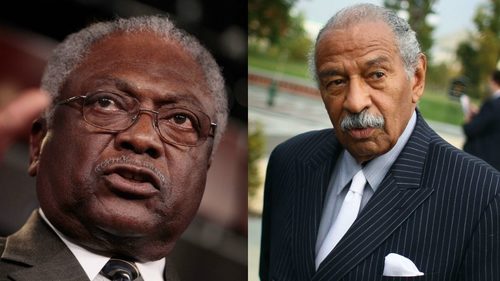 From The State of South Carolina:

U.S. Rep. Jim Clyburn could find himself in hot water.

A flippant response the Columbia Democrat made to reporters while walking in the Capitol is drawing the ire of many.

When asked about sexual harassment allegations against colleague Rep. John Conyers (D-Mich.), Clyburn seemed to suggest elected officials should be held to a different standard than other public figures.

In a video posted on Twitter, the 77-year-old Clyburn is walking to an elevator with Congressional Black Caucus chairman Cedric Richmond (D-La.), when asked “Other men in other industries have faced similar accusations … and gotten out of the way, resign, stepped down, far faster than he has, right … Harvey Weinstein, Charlie Rose, Matt Lauer?”

Clyburn’s response, “Who elected them?”

I think Rep. Clyburn has a point.

That was followed by another question, “So it’s different because he’s elected,” but the elevator doors closed before Clyburn might have responded.

Detroit voters have been electing Conyers to represent them for nearly half a century. Do they now want him to no longer represent them? I, personally, don’t know. I’m a big enough believer in democracy to think that the voters of Detroit should have some say. Black women seemed okay with O.J. Simpson in 1995, so I’m not sure what they want.

A writer for The New York Times Magazine and National Geographic tweeted that Clyburn invoked the name of Susan Smith, South Carolina’s infamous child murderer, in his defense of Conyers.

“James Clyburn compared Conyers’ accusers to the child murderer Susan Smith, who initially claimed a black man had abducted her kids. Clyburn said, these are all white women who’ve made these charges against Conyers,” Robert Draper tweeted.

When asked if that comment was true, Draper said he verified it through two sources, adding “Clyburn has used the Susan Smith parallel more than once, to members & staffers.”

Also at this morning’s House Democratic caucus: James Clyburn compared Conyers’ accusers to the child murderer Susan Smith, who initially claimed a black man had abducted her kids. Clyburn said, these are all white women who’ve made these charges against Conyers.

The lying Beckys with the good hair are always out to ensnare the proud black man in their diabolical racist wiles.