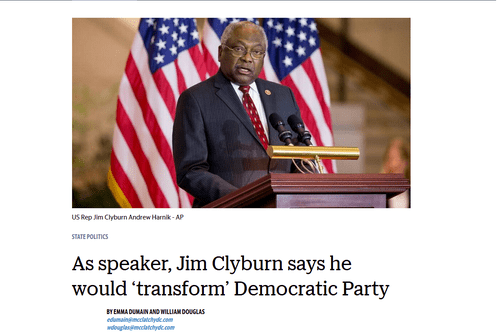 One reason the Democrats keep ancient warhorses like Nancy Pelosi around is to forestall the Diverse Party’s upcoming internal war of all against all over who gets the spoils. Now, elderly black Congressional leader Jim Clyburn is putting himself forward as a potential Speaker of the House, cleverly positioning himself as reassuring to non-blacks as being too old to launch the Democratic Party’s upcoming internal race war, but also as galvanizing to blacks by promising to help position younger blacks to win the Race War for Control of the Democratic Party after his time.

Suggestion to Rep. Clyburn’s speechwriters: position himself as the Moses who will get his people of freed slaves to the edge of the Promised Land, allowing a younger Joshua to take what is rightfully theirs.

From The State, a newspaper in South Carolina:

As speaker, Jim Clyburn says he would ‘transform’ Democratic Party
BY EMMA DUMAIN AND WILLIAM DOUGLAS

TUNICA, MISSISSIPPI
As speaker of the House, U.S. Rep. Jim Clyburn says he would be a “transitional” leader but not “custodial.”

The South Carolina Democrat says he would work to “transform” the Democratic Caucus to make the party more appealing “to young African Americans who still feel … take(n) for granted.” …

Surrounded by allies and supporters at the Congressional Black Caucus Institute’s annual policy forum in Tunica, Miss., last weekend, Clyburn spoke more frankly and openly than he had before about how he would approach the top job in the House’s leadership.

Clyburn also made clear he was ready for the challenge — and ready to make history as the first African-American speaker of the House — rather than demure that the decision was not up to him.

“I’m very much up for it,” Clyburn said in an interview with McClatchy during a break from conference activities.

The third-ranking House Democrat, most senior African-American in Congress and 25-year veteran lawmaker, Clyburn repeated he has no intention of challenging Democratic House leader Nancy Pelosi of California for the top job if she wants it, assuming Democrats retake control of the House in the November elections.

However, Clyburn signaled he was prepared to offer himself up as a successor should Pelosi not have the support to win back the post she held between 2007 and 2011 — a distinct possibility as many Democrats clamor for new leadership. …

In sketching out his possible speakership, Clyburn used the word “transitional” several times. It was a nod to those who have said the 78-year-old lawmaker should not plan for a long-term tenure if he becomes speaker but serve as a “bridge” between the current leadership slate and the next generation of leaders — and specifically groom that next generation for near-future ascension.

But Clyburn bristled at the suggestion he would be a custodian, a symbolic figurehead without lasting influence.

“I think our party needs to be transformed and that’s what I’m talking about,” Clyburn said. “Custodial? Lord, no.”

He said Democrats must be smarter about how they sell themselves to voters. Others have made this point as well, but Clyburn put an emphasis on winning over African-Americans.

Clyburn recounted a conversation he had had recently with a congressional candidate who thought he could appeal to black voters by simply running on an anti-Trump platform.

“I said (to him), ‘Wait a minute. So you think you’re gonna conduct your campaign trying to be attractive to black voters and leave it up to an anti-Trump feeling for black people to vote? You don’t feel an obligation to reach out to that community and let them know what’s in it for them if you were to get elected?’ ” Clyburn recalled saying to the candidate. …

A leadership race between Clyburn and Hoyer could be ugly and divisive. …

But the stakes are higher now than they were eight years ago, and it’s less likely Clyburn would back away from the chance to be the first black speaker.

The historic nature of a Clyburn speakership could bolster his support, too.

The Black Caucus is pushing particularly hard for Clyburn to prepare to run for the post if Pelosi bows out, and there’s every indication it would vote as a 40-plus-member bloc. …

Black Caucus Democrats currently account for 45 of the 193 Democrats in the House of Representatives. However, the number of black Democrats could grow after the midterms.