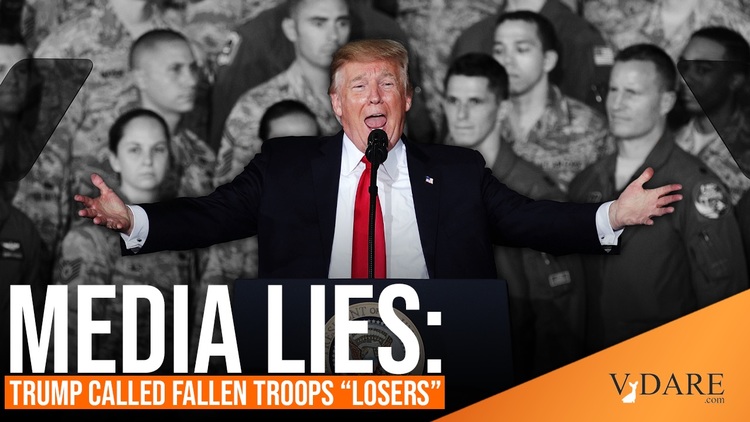 “Another reason that I’m going to win another four years is because newspapers, television, all forms of media will tank if I’m not there because without me, their ratings are going down the tubes. Without me, The New York Times will indeed be not the failing New York Times, but the failed New York Times. So they basically have to let me win.”

Whether or not that’s the case, the media do seem to be intentionally attacking Trump in an ineffective way. The latest fusillade —that Trump disparaged fallen troops—is believed exclusively by people who already detest Trump, but by no one else.
Their proof: THREE SEPARATE MEDIA ORGANIZATIONS HAVE CONFIRMED THE STORY! Yes, all with anonymous sources. Why shouldn’t we assume it’s the same guy who talked to The Atlantic, then “confirmed” his own story to the other news outlets? We were looking for something more along the lines of an actual person stepping forward and saying, I was there. I heard the president call dead troops “losers.”
Of all the lies to tell about Trump, at least this one gets a “10” for difficulty.
If anything, Trump is too smitten with the military. He was so impressed with himself for loading up his Cabinet with generals! He bragged about it constantly as if no president had ever done anything so macho. One lonely voice warned him during the transition that he wasn’t getting any Pattons, but the president is more inclined to believe what he saw in a movie than blindingly obvious truths.
And the truth is, we can’t have manly generals anymore because generals are confirmed by the U.S. Senate, which includes Democrats. While Republican senators want to know if the nominee is respected by the troops, whether he’s shown tactical brilliance in battle and so on, the Democrats just want to know things like: What steps has the nominee taken to promote women and transgenders in the military?
That’s how we ended up with coxcombs like Gen. Jim Mattis, who required his troops to take “cultural sensitivity training” before deploying. Known to himself as “Mad Dog” and to others as “Chihuahua,” Mattis desperately wants all reporters to know that he carries a copy of Marcus Aurelius’ “Meditations” with him into war zones.
Trump was tickled pink about “my generals,” until they all began behaving the way any sane, sentient person knew they would. They attacked the president in exchange for fawning media coverage and rushed to the press to denounce any suggestion of the possibility that America not be in as many wars as possible, at all times.
Trump’s National Security Adviser Lt. Gen. H.R. McMaster actually invoked the Holocaust in opposing Trump’s decision to withdraw troops from Syria, where we’d already bombed innocents based on (it later turned out) false reports of the Assad regime using nerve gas.
If journalists cared to showcase some Trump-adjacent callousness toward the troops, they’d quote Don Jr.’s book “Triggered.” Junior described driving through Arlington National Cemetery the day before the inauguration. Seeing the graves and thinking of all that these men sacrificed, he was reminded of the sacrifices made by his own family:
“In that moment, I also thought of all the attacks we’d already suffered as a family, and about all the sacrifices we’d have to make to help my father succeed — voluntarily giving up a huge chunk of our business and all international deals to avoid the appearance that we were ‘profiting off the office.'” (My emphasis.)
But no, journalists would rather show off to one another with histrionic accusations than come up with a plausible story.
Remember the last time “Trump” and “military” were used in the same sentence? In 2018, Trump said he’d like to throw a big military parade down Pennsylvania Avenue, and the media responded with their usual cool reasonableness.
If I were trying to defeat Trump, my argument would be something like: “He betrayed his voters.” “He turned the United States presidency over to his pea-brained son-in-law.” But our constitutionally protected guardians of democracy are going with: Trump is either a fascist who loves the military, or he hates the military. Whichever. Your choice.